The Raspberry Pi boards are great little Arm Linux SBC’s with a low price and great community support. But the Broadcom processors used in the boards are also fairly old so they may not be suitable for some projects. If your application needs or would benefit from modern features such as memory over 1GB RAM, an actual Gigabit Ethernet port, USB 3.0 port(s), 4K video output, or H.265 hardware video decoding you’ll have to find Raspberry Pi alternatives.

I’ll point out 5 alternative single board computers in this post from the point of view of existing Raspberry Pi users, who will want good software support and a board with the same or similar form factor as Raspberry Pi 3 Model B/B+ in order to reuse their add-on boards and/or enclosures. Price has to be competitive as well, so nothing above $80 will be mentioned. The boards are not listed in any particular order.

The board runs various Linux distributions, NetBSD, and Android. You’ll find documentation in the Wiki, and get community support in the forum or IRC. 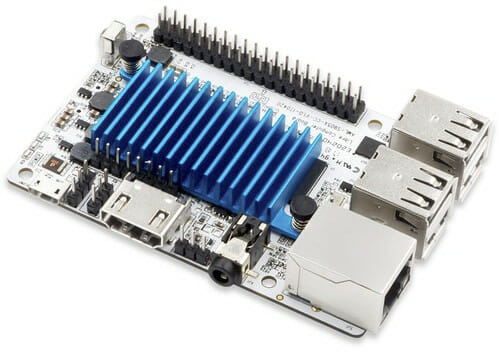 Libre Computer AML-S905X-CC is powered by Amlogic S905X quad-core Cortex-A53 processor which should also deliver increase performance over Broadcom processors found in Raspberry Pi boards, support 4K H.265, H.264, and VP9 hardware decoding, and video output up to 4K @ 60 Hz. You also have the option of getting 1 or 2GB RAM. Contrary to Rock64 board it is however limited to Fast Ethernet, and USB 2.0 ports, but bear in mind video playback quality is usually better on Amlogic processors compared to Rockchip ones.

Support is available from forums, IRC, Facebook groups, and so on. You’ll find links to the source code and firmware image on the product page with AML-S905X-CC board running Android, Linux distributions like Debian or Ubuntu, and NetBSD.

Most SBC’s in this list have been released at least one year ago, but ODROID-C2 board is the oldest board in this post which also means the software may be more mature. ODROID-C2 features Amlogic S905 processor with four Arm Cortex-A53 cores @ 1.5 GHz, 2GB RAM, 4K H.264 & H.265 (but not VP9) hardware video decoding, 4K UHD video output, Gigabit Ethernet, and support for fast eMMC flash modules.

ODROID-C2 can run various Linux distributions and Android, and has great support via active forums and a detailed Wiki.

Tinker Board quickly became popular thanks to the name recognition of a company like ASUS. The SBC features a Rockchip RK3288 quad-core Cortex-A17 processor @ 1.8 GHz significantly faster than BCM2837(B0) found in Raspberry Pi 3 boards, 2GB LPDDR3 RAM, Gigabit Ethernet, H.264 / H.265 4K hardware video decoding, 4K up to 30 Hz or 60Hz depending on your TV,  and a better audio codec.

ASUS Tinker Board is however fairly more expensive at $79.99 on B&H, so you’d be better off getting ASUS Tinker Board S with the same specifications plus 16GB eMMC flash sold for $81.99 on Amazon.

If you want an Arm board following Raspberry Pi 3 form factor with the most processing power,  Rock Pi 4 is the board to buy thanks to a Rockchip RK3399 hexa-core Arm Cortex-A72/A53 processor coupled with 1 to 4GB RAM. It also offers fast interfaces not found on Raspberry Pi boards such as USB 3.0 ports and Gigabit Ethernet, as well as 4K support for video decoding (H.265, H.264, VP9) and video output up to 4K @ 60 Hz. Storage options include support for eMMC flash modules and M.2 NVMe SSD cards. Rock Pi 4 is also the only Raspberry Pi alternative in this list that includes display and camera connectors, and that provides optional 802.11ac WiFi 5 and Bluetooth 5.0 connectivity.

You’ll find documentation and Android & Linux firmware image in the Wiki, and support is available through the forum although the community does not appear to be overly active.

Rock Pi 4 can be purchased through various distributors in China and Europe, The Rock Pi 4B with WiFi, Bluetooth, and 4GB RAM is also found on Aliexpress for $79.99 plus shipping.

Bear in mind that mechanical and electrically compatibility of those boards with Raspberry Pi 3 model B/B+ is not guaranteed since there will be some slight differences. That means that some enclosure may need some rework for Raspberry Pi alternatives to fit in and that Raspberry Pi HAT add-on boards’ signals should be checked before connecting it to another SBC. That may also require some software work for a HAT to work before reaping the benefits of the extra power or features from your board.

If you are interested in more than just Raspberry Pi lookalikes, you can check out our list of Arm and x86 development boards,  as well as the list of the most powerful Arm SBCs under $200 which I may need to update for 2019…

Doesn’t really surprise that Allwinner is missing when listing top5 boards. Their support has been not so great.

good article. all are good alternatives. but you have one that is giving a lot to talk about. Atomic Pi. with Intel processor and you can run Windows 10 full 64 or 32 bit ..

and lied on specifications

You should probably not suggest the tinker board because of it’s horrible power situation.

I’m giving up on Allwinner too. Lately I have been working with various Rockchip SOCs.

Allwinner had the golden ticket and blew it. First mistake, the sunxi community was a huge asset and the factory never supported it much. Second mistake, they never put their chips into US/EU distributors. Third mistake, they practice port and forget on software. Fourth mistake, the joined Linaro and then never participated. Fifth mistake, no public, read-only way to access their source code. And many more…..

… and then there’s the H6 debacle with PCIe that doesn’t work.

they are a problematic company practise like those mainland con companies

If you’re a maker, you want easy access to GPIO, I2C, SPI, etc. I’ll call them “external device support” (EDS). All of these boards have EDS shown on the pinout diagrams but that doesn’t mean the software is there to enable them. Ideally there should be a config utility that lets you turn EDS on and off. Here’s my take on ease of use: Rock64: EDS default is off. User has to figure out device tree overlays on their own to activate EDS. AVOID. Le Potato: No config utility, user must use device tree overlay. AVOID. Odroid C2: Support for… Read more »

Yah I was surprised that the NanoPi K1 Plus wasn’t listed. For the same price is addresses many of the raspberry pi’s numerous shortcomings.

K1 Plus is based on Allwinner H5 which unfortunately is already discontinued.

I forgot about it. I had a list of top 6 Raspberry Pi alternatives as I included NanoPi K2 at first, but then I realized the company had stopped selling it, or at least removed it from their website, so I removed it from the list.

>Le Potato: No config utility, user must use device tree overlay. AVOID. There’s the lc_overlay utility with a bunch of pre-defined dtbos. Device tree overlay is the proper way to do things in upstream. Did I mention they work dynamically and can be loaded and unloaded from userspace? I2C, SPI, SPI displays, touchscreens, and build your own. >Odroid C2: Support for all EDS by simply loading/unloading kernel modules. Supports WiringPi. GOOD! What…kernel modules != device trees. What good is wiring pi when you have libgpiod? Having a de-facto upstream GPIO interface is better than praying some mediocre coded Python library… Read more »

You may be missing the point? Many SBC users are not programmers and their Linux abilities are limited. To support them, they need a simple menu utility to enable I2C, SPI, etc. Device tree overlays is the correct way to do it, but don’t leave the user hanging with poor documentation or no documentation at all.

Raspberry Pi uses DT overlays. The end user doesn’t know or need to care about that. They just use the rpi-config menu to enable and disable with a single click. That’s the right way to support users who are makers and are not programmers.

As Da Xue mentioned: ‘Armbian has device tree overlay support for a lot of Allwinner boards.’ — there the utility is called (not so) surprisingly armbian-config to enable/disable what you called “external device support” (EDS). Looks like this for example: https://github.com/armbian/config/issues/33#issuecomment-433604015

seriously why people still buy these craps when tv boxes are a quarter cheaper with more features for so many years.
if its for home diy, why invest so much?

if you want a board just to run linux then a tv box might be ok. However if you want to access to e.g. gpio pins you may have to do some soldering. Also a lot of the TV boxes don’t support Gbit Ethernet (especially not the cheap ones).
Lastly thermal behavior of some of the tv boxes is horrible.

You have a point, but the target market is different. One is for general hacking and demo projects, the other is well, a prepackaged purpose. The best one, ODROID-2, is old. It could use a refresh, and I think its coming…if compatibility is maintained then much of the support is already there.

The ‘best’ one for which use case?

Obviously not since as written above ‘ODROID-2, is old’. So it could be the U2 or the C2 but neither N2, H2 nor HC2. Still impressed by something being ‘the best’ without specifying the use case.

The article is about boards which can be used to replace an rpi. A TV box won’t do that for many usage cases, so it’d be a pretty useless recommendation.

TV box use is what has made several of these SoC successful, Amlogic..

Many tv boxes don’t give you a decent access to a shell. Often it’s require to open them and figure the serial pins and baud rate by yourself. Then you realize that you get a totally crippled busybox environment and that the only place where you can write refuses to execute anything, this is not exactly convenient to upload your freshly cross-compiled binaries. Once you manage to hack something and to get an executable to work using awful hacks a la “exec /proc/self/fd/0 < /tmp/executable" and consorts, you finally realize that the kernel is horribly patched and cannot reliably execute… Read more »

Odroid N2 is looking good also, though I guess it will take time to build up as much software support as the xu4.

an updated list of Win 10 IoT boards would be great

time to time, price drops to $49.90 for that board https://store.intelrealsense.com/buy-aaeon-up-board.html