The first Raspberry Pi single board computer was officially launched on February 29, 2012. Raspberry Pi Model B included a Broadcom BCM2835 ARM11 processor with 256 RAM, an HDMI port, and the familiar form factor we know today.

But the very first time I wrote about the board was on May 8, 2011, exactly ten years ago, with a post entitled “25 USD ARM11 Linux Computer” showing the prototype of Raspberry Pi USB Computer that looks nothing like what was launched the next year. 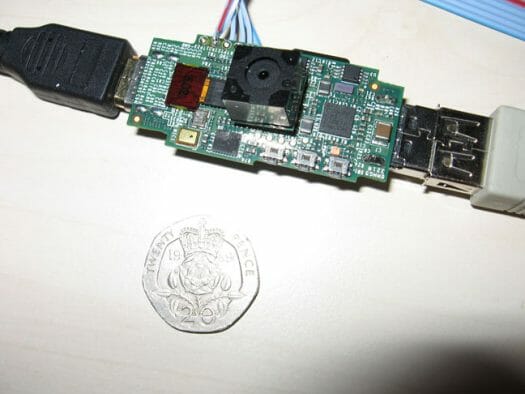 This just looked like a stick with an HDMI port on one hand and a USB port at the other. We did not even know it was based on a Broadcom processor at the time. Those were the preliminary specifications:

Interestingly the plan was to run Ubuntu operating system with programs like Iceweasel, KOffice, or Python, but history ended up being quite different, as Canonical was not interested in helping to port Ubuntu to such a low-end platform, and only changed their mind once more powerful versions were released several years down the road.

The mission has not changed over the years, as David Braben explained the goal was to give a £15 computer on a stick to every child to help them learn to program and better understand computers.

128MB RAM for Linux desktop with Firefox browser? They must’ve been kidding!

Have you checked FF 3.0 system requirements? Back at that time several things were different, e.g. users were used to ‘bookmark managers’ and kept not half of the Internet open in thousands of different tabs while ads were also less invasive than today.

Remember the joke that EMACS is the acronym for ‘Eight megabytes and continuously swapping’ back from a time when 8MB RAM were considered huge and people already complained about ‘bloated’ software?

It would be useful, organizing many open tabs like a ‘bookmark manager’, because that is what most user want to use it like?
Most times it’s not very useful blaming average users for their behavior, if there can be software improvements, that can cope with that (on average SBCs having at least 1GB RAM)?
Just for comparison: on common printer resolution these 8MB are at least 150 black and white (half filled, one side written) A4 pages (250x on nowadays SBCs).

I’v been using linux + netscape navigator 3 with 16 MB for a long time. The resource usage didn’t dramatically increase during the netscape->mozilla->firebird->firefox transitions, the biggest jumps were during netscape 2->3, then 3->4, then once FF started to become “modern”. But having used netscape communicator 4.76 for several years on 32MB it was OK and quite feature-complete, even supported YahooMail pretty well. When I felt forced to upgrade it, I’ve kept firefox 2 for a long time as it was still reasonable on resources. I don’t remember if my laptop had 64 or 128MB by then but by then… Read more »

One of the reason for pushing for Gemini is this too big stack to re-implement.

Wow, I didn’t even know that there was a published prototype before the models A and B… I feel like I should have…