Elephant Robotics’ MyCobot robotic arm was introduced last year with M5Stack Atom & Basic ESP32 modules with 6-degrees of freedom, a 250 grams max payload, available now for $599. The company has launched a new $699  version – MyCobot-Pi – with most of the same features, except for an upgrade to Raspberry Pi 4B which offers more performance and flexibility.

Both versions of MyCobot arm robotic arm support accessories such as a gripper and a suction pump attachable through a LEGO connector, but while the original version – MyCobot-M5 – relies on Arduino programming, the new MyCobot-Pi runs Debian/Ubuntu and ROS operating systems with image recognition algorithms that can work with a variety of cameras. Since we’ve missed last year’s announcement, we’ll cover both models in this article.

Despite the mechanical parts being the same, the specifications for MyCobot-M5 and MyCobot-Pi differ quite a lot:

MyCobot-M5 is meant to be connected to a host computer, and can be programmed using the Arduino IDE, but also support M5Stack’s UIFlow visual programming software based on Blockly, as well as RoboFlow software for industrial robots supporting multiple functional modules, and Arduino + ROS open-source system. 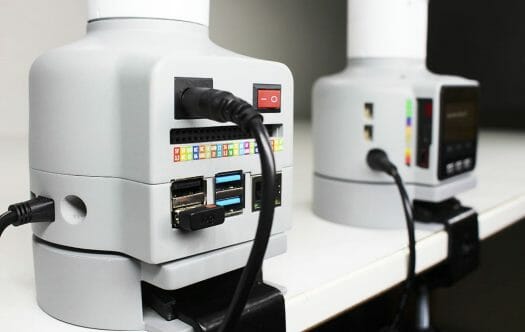 myCobot-Pi is more like a standalone Raspberry Pi 4 computer that happens to be fitted with a robotic arm, So you could just connect an HDMI display, USB or wireless keyboard and mouse, and develop your application directly on the robot running Debian (Raspberry Pi OS), or Ubuntu, and ROS to handle the servos.

MyCobot robotic arms are mostly designed for robotics and artificial intelligence research and education, as well as smart home and light industry and commercial robotics applications. Commercial applications would often require a heavier payload so Elephant Robotics also designed the $2,999 MyCobot Pro version of the MyCobot-M5 with a max payload of one kilogram, a brushless DC industrial motor, and higher repeated positioning accuracy (±0.3mm vs ±0.5mm for the cheaper versions).

You’ll find the source code for ROS, C++ & Python APIs, and a mobile phone app on Github, and you may also want to check out the documentation to learn how to get started with the ESP32 / Raspberry Pi robotic arm.

If you’d like to give myCobot robotic arm a go, myCobot-M5 and myCobot-Pi cab be purchased on Elephant Robotics store for $599 and $699 respectively. You’ll also find a suction cup, an adaptive gripper, a choice of bases, and an “intelligent warehouse kit” that can teach kids C++/Python programming, computer vision with OpenCV, using color blocks, a suction cup, and other accessories. 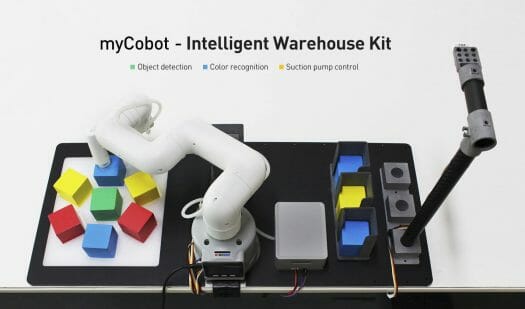 A crowdfunding campaign crippled with delays

If Elephant Robotics rings a bell, it may be because we wrote about the company’s MarsCat bionic cat based on Raspberry Pi 3 last year, which launched via Kickstarter, and was initially scheduled to ship in May 2020.  But the company completely underestimated manufacturing challenges, and COVID-19 was yet to be a broadly known issue at the time of the announcement, and to date, MarsCat has yet to ship. The company provides monthly or so update, but backers are clearly not pleased with the one-year delay and relative lack of communication. This is not clear whether this can affect MyCobot in anyway, but it does not look very good.

Via LinuxGizmos and Techbullion

For $700, I think I will just pick up the colored block myself!

These are DC motors. Their positioning is not very accurate. The article states:

After 100,000 times, the accuracy is +/- 50 meters. Its reasonable to conclude that I will be able to stack significantly more colored blocks than the machine.