Raspberry Pi RP2040 microcontroller is not exactly new, as it was introduced with Raspberry Pi Pico board last January. But until now, you had to get samples from the Raspberry Pi Foundation due to limited supplies.

What has changed today is that you can more easily buy Raspberry Pi RP2040 MCU for one dollar either in single quantity or reels with the following pricing:

The math geniuses among us will have quickly figured out there isn’t any volume discount, so it’s one dollar per chip whether you buy one or thousands. [Update: See comment from Raspberry Pi Foundation below explaining pricing for reels is still to be determined]

That’s about all there’s new. If you have not quite followed recent Pico news, here’s a summary of Raspberry Pi RP2040 specifications: 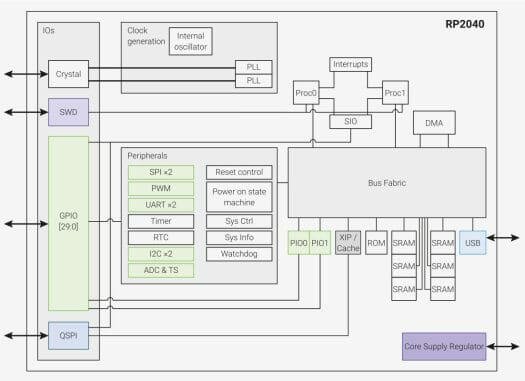 You’ll find more detailed RP2040 specifications in the initial announcement, and/or check out our article about the RP2040’s programmable IO blocks, one of the most interesting features of the microcontroller. MicroPython and C are the preferred (e.g. officially supported) programming language, but if you like a challenge you can play with Rust,  RT-Thread, FreeRTOS, and others.

You can purchase Raspberry Pi RP2040 microcontroller from the usual partners including RS Components, Cytron, Seeed Studio, etc… Note that supply may still be tight, and single unit purchases could be limited to 5 pieces, while reels/tapes may be on back order.

Today’s announcement is for single unit quantity only. We’re still figuring out what reel-scale pricing will look like in the autumn, but we expect it to be significantly lower than that.

Noted thanks. Those were the tape/reel prices provided by Cytron.

Still not very interesting, except if you want to benefit from libraries that will quickly start to pop up everywhere for this platform once it gains in popularity essentially for the logo printed on the chip. I mean, it’s not bad, and well balanced overall. I just think that STM32 look better.

With ‘chinese’ chip manufacturing lockdown, even stm32 does not look nice. But, as i know ESP8285 still available with good qty and nice price.

Yes, many people do not realize that the chip shortages are uneven. Some chips are impossible to get while others have large supplies available.

Ah makes sense. Chip shortage at work, a dollar per MCU isnt going to faze, a reel commitment also makes sense for factories to get revving, put in the investments. pun intended.

Is a dollar a good proce for this? Im out of the loop regardings MCU prices

If you have to ask, then the price is just fine… /trollface

It’s pretty expensive for the specs.

I’m a little surprised about your view – it is something like 3-4 times cheaper than the cheapest stm32 microcontrollers if you want to buy at reputable sellers in quantity one. So I guess, it depends on what you compare to.

don’t think 1$ is super cheap, you can get those STM32F103 boards for around 1$ and that has a lot more stuff and connectors on it

No, that is not possible now. Chip shortage is really very very serious now and may carry in to next half year.

I was contacted earlier this year by somebody who tried to switch from STM32 to GD32 due to shortages. I bought five samples, failed to flash four, and the one that would work would not boot. So it may not be straightforward as a replacement.

Edit: I found the message it was specifically about replacing STM32F103RCT6 with GD32F103RCT6.

That’s good to know. I guess I’ll need to keep that in mind and test it out. Do you have an recommendations for a bluepill-like board that could be battery powered? I saw some STM32L series boards on Taobao.. but they don’t seem widely used I’m in the midst of clobbering together an event logger. The board will wake up on a “button press”, write down the time (to SD card?) and then go back to sleep. And I need it to run on battery for 6-12months. Maybe a bluepill will work – I’m a bit of a beginner at… Read more »

Just checked that taobao link , the price mentioned is 25.90 RMBs , so that is not exactly your target “1 USD” … above that I suggest to you request for a price quote and also lead times from parent company , you will come to know the ground realities .

I often see a lot of negative comments from commenters whenever there is a RP2040 or Pico related article published here. I am not from an embedded background but have really taken a liking to the RPi Pico since it was released this year. I think the reason is the clear yet lightweight documentation and the ease of development (I added a reset switch separately though). So, I am genuinely interested to know why people feel so negative about RPi Pico here. Is it because most people are very experienced with more pro platforms and find it too basic or… Read more »

That’s probably because from a technical point of view it does not really bring much to the table. It’s about the same price as many ESP32 boards with WiFi & Bluetooth, more expensive than STM32 boards (except this year with shortages), all of which already come with C SDK, as well as support for MicroPython & Arduino.

The real advantage of Raspberry Pi Pico/RP2040 here is name recognition. So people who were not interested in microcontroller boards previously may have taken an interest. Documentation may also be easier for beginners (TBC).

>I often see a lot of negative comments from commenters whenever there is a RP2040 Because a dual cortex m0 with almost no peripherals isn’t very interesting. They haven’t solved the hard problems with microcontrollers like isolating coding mistakes from trashing everything. Even if you work only in micropython it’s only a matter of time before some memory error leaves you with a problem that kills the whole system and is infuriating to debug. A chip with an a35 for linux, a fast m core for an RTOS and the DRAM and PMIC bs all wrapped up in a QFN… Read more »

>A chip with an a35 for linux, a fast m core for an RTOS and the DRAM and PMIC bs all wrapped up in a QFN would have been really nice.

With a price point equal $1 for single samples and well below $1 for larger quantities, that’s not possible at this time.

The RPI Foundation is problematic in many ways, it is a Broadcom shop. It is also censoring/closing comments and threads on its forum about things it does not like.

Furthermore, it works with the evil empire of Microsoft to root your Rpi with Redmond’s malware (including telemetry).

I’m not with raspberry, but want to be fair: Broadcom isn’t involved in RP2040 design. It’s their own project – with some early help from IMEC. Regarding there forum: I’m not an everyday user, but I can’t see appreciably many comments being censored or closed in their own forum. Criticism of their products (e.g. keyboard problems with their Raspberry Pi 400) is not censored. That’s amazing considering it’s their very own forum.

Would be interesting to see RP2040 based board for 3D-printers with Marlin Firmware:
https://github.com/MarlinFirmware/Marlin/issues/20877