The first one is Olimex RP2040-PICO-PC that’s indeed like a pico PC board with an HDMI connector for video, a micro SD card for storage, a standard 3.5mm audio jack for speaker or headphone, and a USB host for a keyboard.

There are some I/O headers for good measure, what looks like a 3-pin UART console header, a 2-pin header for LiPo battery, as well as a reset button.

The second board, dcelectr DC2040, follows the Raspberry Pi Zero form factor with a 40-pin GPIO header, micro USB port, Micro SD card socket, as well as a mini HDMI port that will be used as DVI output…

I am making progress on my Pi Zero form factor board (named DC2040) with an RP2040 chip (thank you @EbenUpton). It has a mini HD.. [coughing] …a mini * port for DVI (thank you @wren6991). I will share the #KiCad files on github when the design is complete. pic.twitter.com/550PzLHrlC

So that’s how it works since DVI signals can be carried over an HDMI cable. The boards will transmit RGB signals without any audio since it’s not supported over DVI.

The HDMI/DVI idea appears to be derived from Raspberry Pi engineer Luke Wren (Wren6991)’s work on his PicoDVI board outputting 640x480p 60 Hz DVI mode with 264 kB SRAM used, the two Cortex-M0+ clocked at 252 MHz (that’s a bit higher than the 133 MHz advertised by the Raspberry Pi Foundation), and of course, one of the PIO blocks from Raspberry Pi RP2040 microcontroller. 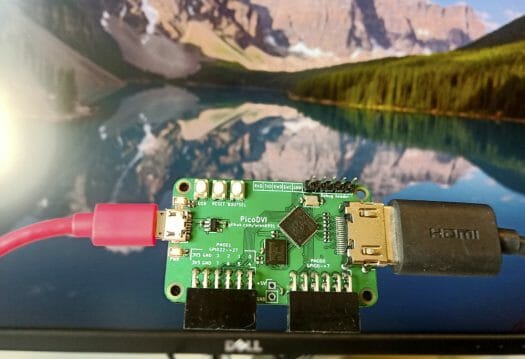 Here are the resources used for one display:

Why mentioning with one display? Because it works with two monitors as well since only one of the PIO blocks is used, half of the DMA channels are still available, and one Cortex-M0+ is still free. 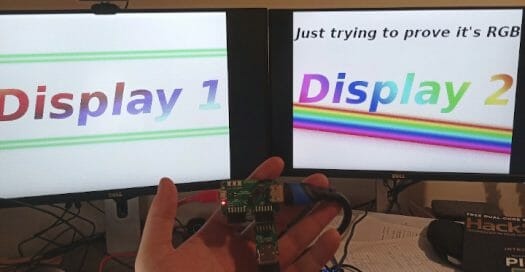 That’s pretty neat as a demo, but it’s close to reaching the limit of the Raspberry Pi RP2040 microcontroller which also had to be overclocked for the occasion. But some applications possible with one display include playing retro games, potentially programming the board directly using MicroPython or CircuitPython with the display attached, simple signage to display text and images, etc…

The hardware design files and C firmware for PicoDVI project can be found on Github together with a thorough explanation of how this all works.

I would have thought olimex would have come out with an Allwinner S3L board in the RP2040 form factor.. 🙁

Wow. I expected really cool uses for the pio, but would never have thought hdmi output be possible. At least not this quickly.

nice poc, but i don’t see any real uses for this

For less than $10 you can have TTGO VGA32 based on ESP32 with VGA output and less than $2 you can have a VGA to HDMI cable on AliExpress. VGA32 allows you to emulate retro OS-es such as: Amstrad CPC, Altair 8800, Commodore VIC20, ZX Spectrum and even IBM PC XT.

You can do VGA on the RP2040 too – using a simple DPI + Resister DAC solution – which is how some of the retro emulators are working. The BBC Micro can do it without a DAC as it only supported 8 colours (inc Black and White) so one bit each for R, G and B to deliver (White, Yellow, Cyan, Green, Magenta, Red, Blue, Black) – so you can run that on a Pimoroni Tiny2040.