While there’s a fair amount of AMD mini PC’s, few target the low-cost segment of the market. Maxtang MTN-FP50 offers a cheaper option with either AMD 3020e dual-core APU or AMD Ryzen Embedded R1305 dual-core processor, and pricing starting at around $250 shipped with 4GB RAM and 128GB storage.

The mini PC is equipped with two HDMI ports for dual 4K monitor setups, Gigabit Ethernet, five USB 3.0/2.0 ports, and can be upgraded in various ways thanks to SO-DIMM sockets for up to 64GB RAM, M.2 socket for SSD, SATA port for a 2.5-inch drive, and another M.2 slot for the wireless module. 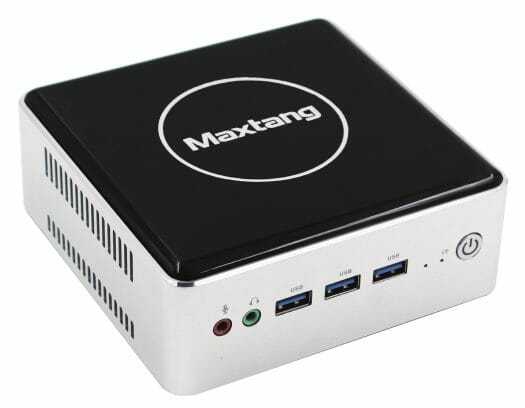 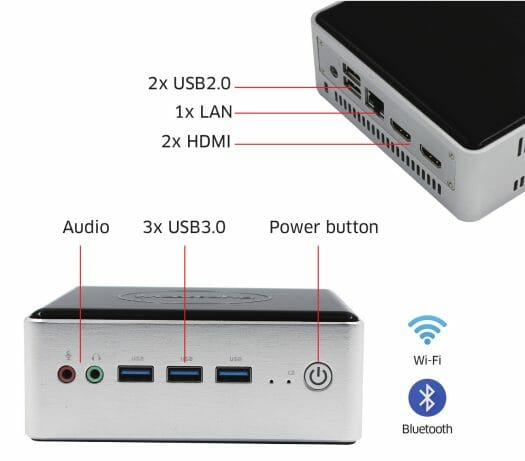 I’m not sure about the type of SSD used. The product description on Aliexpress says an M.2 SATA drive is included, but the manufacturer’s product brief lists an M.2 socket for NVMe SSD.

The mini PC comes with Windows 10 64-bit pre-installed but also supports Linux 64-bit. The device ships with a VESA mount, a power supply, an HDMI cable, a  SATA cable, and a user manual. 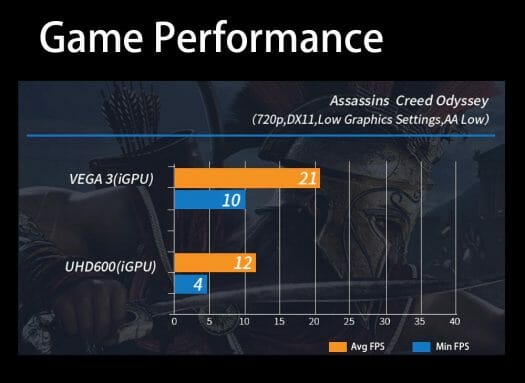 Such a low-cost AMD mini PC is clearly not a gaming machine, but compared to a similar priced Intel Gemini Lake (J4125) system with Intel UHD 600 graphics, the gaming performance will be much better, with the frame rate above twice as fast in many games. The overall performance should be similar, albeit slightly slower, than the DFI’s Ryzen Embedded R1606G SBC I tested with Windows 10 and Ubuntu 20.04.

MTN-FP50 would be great as a barebone machine so that people can configure it as they please, but Maxtang does not offer it without memory, storage, nor wireless module on Aliexpress, so the only option is to buy it preconfigured with 4 or 8GB RAM, and a 128 or 256GB SSD.

Typo: 3x CU Readeoon. Should be Radeon. For SSD type, if you watch the review video, the R/W above 1000MBps. So NVMe definitely.

The case if quite similar with intel NUC. Price is good.

I would not consider $250 to be at the ‘low cost segment’ of the market.

ARM boxes are at this level and unless AMD/Intel can do better than this then they are likely to lag behind ARM for a while yet.

depends what you want. If ‘do better than this’ means graphics that just work using up to date linux versions, and not some never supported vendor blob on an ancient kernel, then amd/intel certainly do better than most lower priced ARM boxes.

Am I the only one who finds that $250 for a dual-core 1.2 GHz machine is a lot ? It’s possible that even an RPi4 would deliver comparable performance for a much lower price, not to mention any second-hand laptop!

RPi4 is blown away by this. But flagship feature phone CPU does better.

However only one offers dual 4K monitor setup, dual M2 slots, SATA port up to 64Gb of RAM etc

> RPi4 is blown away by this. http://www.cpubenchmark.net/compare/...

Nah, you just trusted into worthless BS benchmarking without taking care of due diligence. If the BCM2711 gets a single thread rating of 571 vs. 823 then you simply watched ‘benchmarking gone wrong’.

The AMD 3020e single-threadedly outperforms the RPi 4 (at stock 1.5 GHz clock) by 60%-70% but falls slightly behind when software can make use of all CPU cores. But with an ‘use case first’ approach benchmark numbers do not matter that much anyway. I second what you wrote wrt driver support comparing x64 with ARM…

the problem with a use case first approach, is that everyone has a different use-case.

We’re talking about a dual-core 2.6 GHz machine here since the ‘1.2 GHz’ is just marketing BS justifying the ‘6W TDP’ rating (which applies to ‘base clock’ while actual CPU performance is determined by ‘boost clock’ and of course potential thermal issues when talking about sustained performance — no idea whether this thing has a fan or not).

Or you could grab one of those surplus office PCs, probably for less than $250 and with relatively small form factors.

Pro tip for ppl considering something similar without insane pricing and from a known vendor: HP t540 with Ryzen R1305g. 8W SoC that can be had for around 330€ at least here in Norway.
I’ve owned HP t640 with Ryzen R1505g, it was an awesome machine for daily work!

similar without insane pricing, … for around 330€.

That is and insane pricing IMO. thats like a cost is equal to a last gen intel/amd laptop or chromebook, and with HP thin client you only get minimal memory and storage.

this is not about form factor.
this about price of a HP Minipc.

Do not get confused, it’s not really insane for a norwegian, he/she should be talking from the point of view of the country’s economy, where a normal salary can be 2500-3000€, so 330€ is not much. Or he may be working for HP, either one or the other. But I, as you do, would agree that 330€ is a crazy price for a mini PC with those specs, let alone for a thin client. Companies really got nuts with the prices of their thin clients, being more expensive than whole computers with the excuse of the “working from home” jingle.… Read more »

Companies really got nuts with the prices of their thin clients

lulz…
i dont think its as true now as it was in the past.
my companies that i visited have all move to laptops for general work, from thin clients.

Then again my region is not as rich as higher income countries, like Norway, so i wouldn’t know with the cases over there