M.2 sockets are typically used to connect wireless or storage expansion boards to laptops, computers, and SBC’s. But nothing precludes them from being used for another purpose, and earlier this year we wrote about Sparkfun MicroMod MCU boards with an M.2 connector for GPIOs, I2C, SPI, etc…

IZITRON has expanded the concept with three slightly larger (IZIRUN) STM32 boards routing more IOs to the M.2 connector, and additional features such as built-in EEPROM and buttons. IZIGOBOARD carrier board is then used to host the STM32F0, STM32F4, or STM32F7 board in order to ease development.

IZIRUNF0 is designed for low-power applications and IoT projects, IZIRUNF4 for motor control, display (matrix, OLED), CAN, Ethernet communications, etc…, while the IZIRUNF7 board can be used for more complex applications with 2D accelerated graphical user interfaces, audio, Ethernet, and more.

Key features and specifications for IZIGOBOARD: 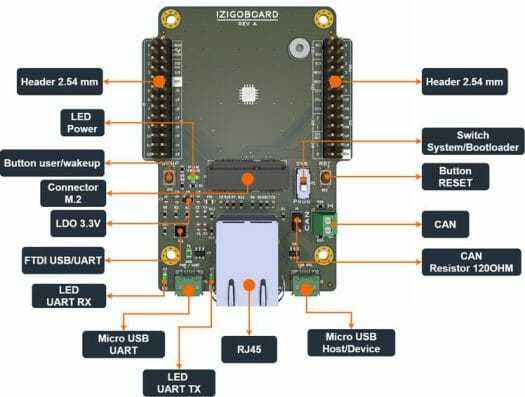 IZITRON explains bare-metal programming of the STM32 boards is possible, but the company also provides littlekernel’s (LK) demo, examples, and drivers. The boards are open-source hardware with KiCad project files including schematics and PCB layout, as well as firmware and software available on Bitbucket.

We noted Sparkfun MicroMod was a similar concept in the introduction, so IZITRON provided several comparisons of IZIRUN and MicroMod boards, including the table below for mid-range boards. 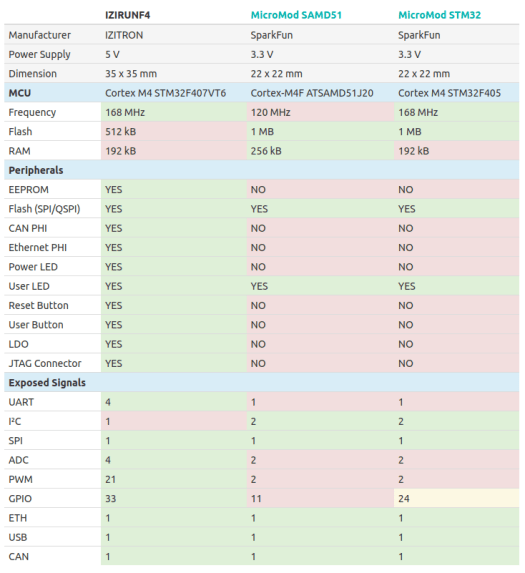 While IZIRUN boards will offer extra features and I/Os, at this point in time, Sparkfun MicroMod ecosystem is larger with multiple carrier boards and a choice of microcontrollers from Raspberry Pi RP2040 to Espressif Systems ESP32 WiSoC.

IZIRUN STM32 development boards are now available on Crowd Supply with a $6,600 funding target. A $30 pledge is asked for IZIRUNF0, $45 for IZIRUNF4, and $60 for IZIRUNF7. For reference, Sparkfun MicroMod processor boards sell for under $15, although with less features. The baseboard itself costs $60, but at least free international is included for all rewards. Backers should get their boards shipped by the end of October.

Cute concept and the m.2 socket seems ergonomically nice, but what’s the advantage of this vs something an arduino clone like a blue pill ? They seem identical, just plugging in with two pin rows.. this way seems like more of a pain to hand assemble and we’re talking 2-4 usd per chip board vs 30 usd The table seems to list a bunch of external perpherals (that maybe you wouldn’t get on a lil arduino clone) – wouldn’t you want most of those on the baseboard and not the chipboard itself? These are genuine questions from a noobie 🙂… Read more »

I guess this is more designed to run an RTOS than arduino type software, in which case the additional on-board NAND and Ethernet + CAN connectivity (for the F4 and F7) are welcome.
These modules are probably more meant for people trying to squeeze a design based on STM32 discovery boards, but keep the baseboard design simple by handling the more complex parts of the layout.