It’s been a long time since I’ve written about a Windows CE (WinCE) compatible module,  but apparently, those are still being developed with China-based UNERON offering eSOM335x Windows CE system-on-module based on Texas Instruments AM335x Arm Cortex-A8 processor, and eSOM3735z Windows 10 module equipped with an Intel Atom Z3735G processor.

What’s even more intriguing is that the company relies on replaceable & upgradable eMMC flash and RAM modules for the Arm SoM, and while the 1GB RAM is soldered on the Intel module, it’s still possible to upgrade the eMMC flash that way. We’ve seen eMMC modules on several single board computers in the past including ODROID-C4  or Renegade SBC, but I think it’s the first time I see this option on a system-on-module. 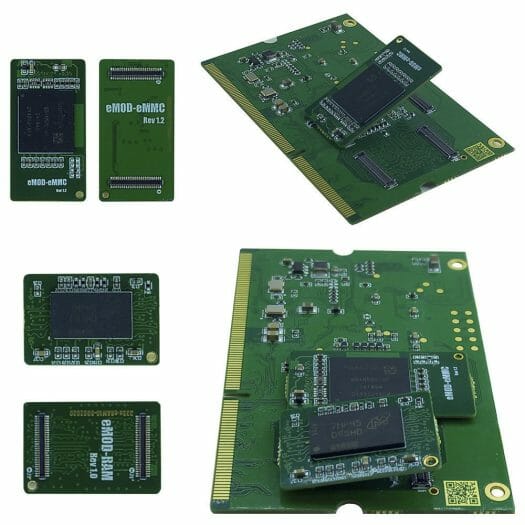 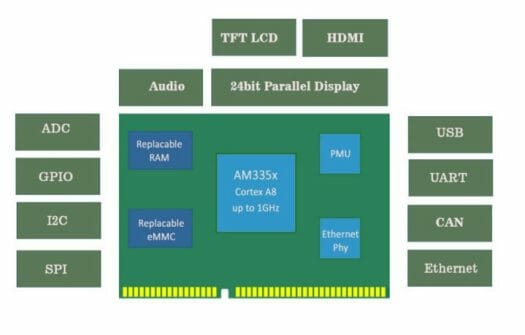 The company supports WinCE by default, but can also provide Debian on request. By WinCE, the company actually means the more recent Windows Embedded Compact 7, as we can find in a Google Drive folder with additional resources including drivers, code samples, documentation, PCB files for the carrier board shown below as part of a development kit. 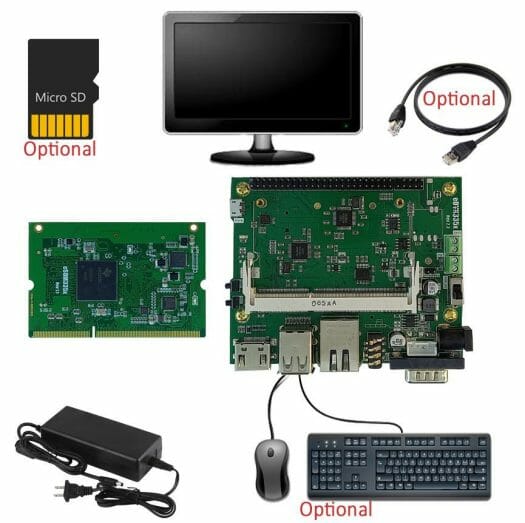 The Intel system-on-module has the same form factor, but only the eMMC flash module is replaceable. 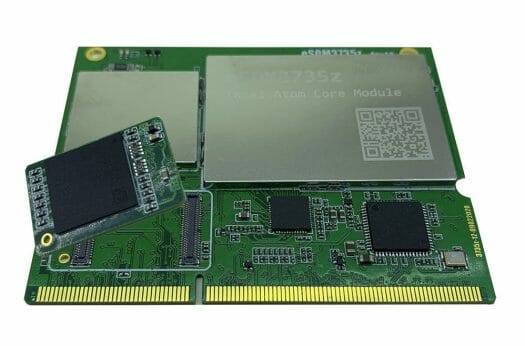 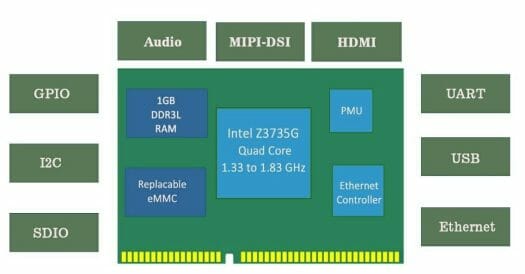 The module runs Windows 10 32-bit by default, but the company also mentions custom support for “EFI Installer OS”, which probably just means any operating system that can install through UEFI. Note that we’ve seen in the past getting all features (e.g. HDMI audio) to work with Linux on Intel Atom Z-series “Bay Trail” hardware could be challenging, although I believe most issues may have been fixed, or at least workarounds are known. Again hardware, drivers, and software resources can be found on a Google Drive folder.

Just like for the Arm module, there’s a development kit with carrier board, power supply, optional display. 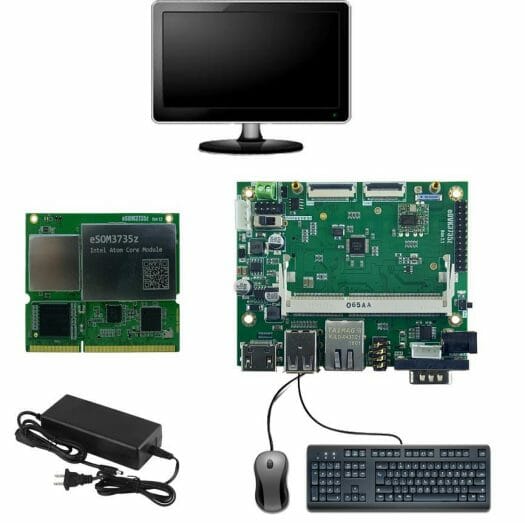 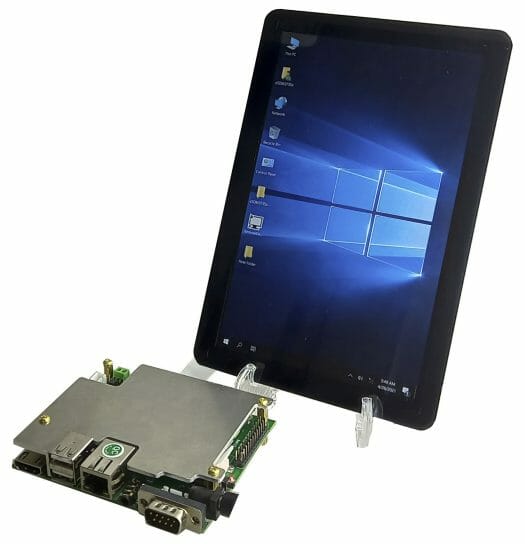 I think it’s an excellent idea. It must be very hard to manage stocks with varying configurations, especially these days where prices can change dramatically and users’ focus can change from one model to another. For example I had to by an Odroid-N2+ with 2GB because that was the only model left in stock at one vendor. With replaceable modules it would be easier for them to flush all their stock. And such tiny connectors are great, they don’t significantly increase the required area, and might actually even help work in 3D and reuse the available space for routing. Being… Read more »

On the other hand two pairs of high-speed connectors to wire up a single DDR3 chip seems wasteful as well — isn’t that more expensive than the 4Gbit (512MB) chip?

For a single chip, possibly. But there is always a balance point, otherwise the same could be said about DIMM connectors then.

Windows CE?! Does that still exist? Let me look that up https://en.wikipedia.org/wiki/Windows_Embedded_Compact ah: WinCE 8.0 released in 2013, Supported until October 10, 2023.

OK … so hardware with an OS that in the last two years of being supported?

It’s indeed discontinued. So it must be old stock…

1) have china stock , and we provide from Chinese intel partner(nanshan district shenzhen) , anyway too many store in taobao.com have stock.

brrrrrrrrrrrr. So it’s like you buy some old stock.

That would be great. We’ve partially seen this already with eMMC, I’m not sure which ones work the same, I believe it’s odroid c2 and firefly boards which are compatible.

But there’s limited compatibility also between boards of the same vendor (caused by 4-bit- vs. 8-bit access for example) and I would recommend reading Hardkernel’s eMMC compatibility page in their wiki.

Great, thanks for sharing. With a bit more efforts from various vendors, all of them could benefit from such practices. The extra connectors cost could be totally offset by the single board, and they could rely on some flash vendors to provide their modules in the suitable format (usually it’s rather something for JEDEC to standarize around such connectors, but it’s probably not needed to make things *that* official). Having intercheangeable DRAM modules could also help getting the crappy DDR training SPL code out of their blobs and really have to adapt to whatever chip is connected (within a small… Read more »