When a VGA monitor does not start at all, a common reason is that one or two capacitors are damaged. All you need to do to repair it is to replace them, and you’re good to go. It’s quite easier than you think, and I’ll show you how.

I was tasked with repairing a VGA monitor, namely an LG Flatron W1934S, that would not turn on anymore. All I could see what the blue power LED blinking regularly, about every two seconds. Since so far, I had a 100% success rate in failing to repair TVs, I was not confident, and I thought maybe the monitor is some special state making it not turn on, as it happened to me with another monitor a few years ago.

But a web search revealed the problem was probably a power supply board issue with one of the capacitors damaged and, in theory, all I had to do was to follow the steps in the video below. Safety warning: please note there are high-voltage capacitors so you’d better wait for a while after disconnecting the monitor from the mains before opening it.

So let’s get started. The first step was to remove the stand which was not super complicated except I had to pull very hard to take it out. Then we were told to remove the back cover of the display. That’s nice, but I had no clear idea how to do it as I could not find any screws. It turns out the technique is to use an old credit card or a screwdriver to popup the back cover. I went with the latter and did a dirty job of it… 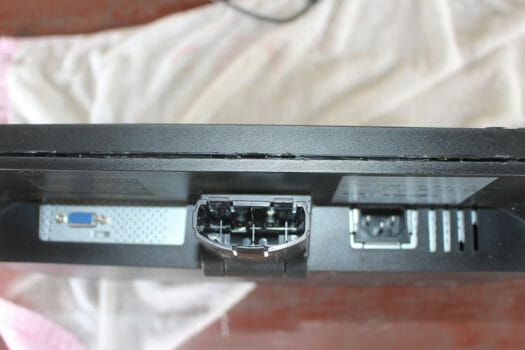 But at least managed to open it, and the following steps included unplugging several cables. 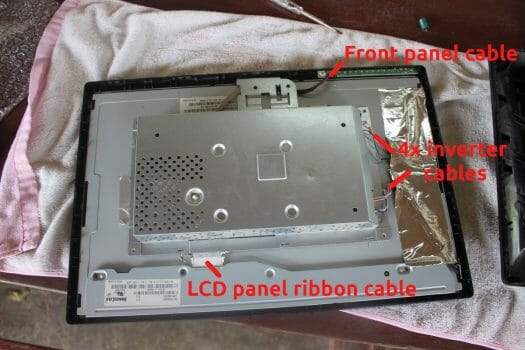 We can now take out the main block that contains the power board and a smaller A/D board. 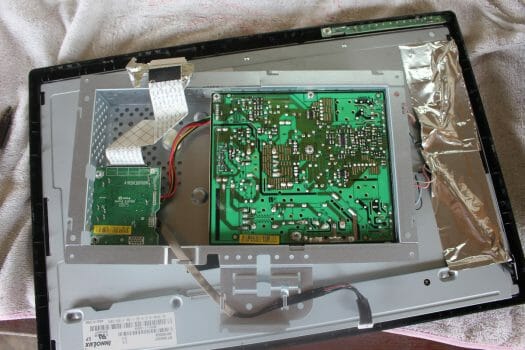 We’ll need to disconnect the cable running from the analog board to the power board, and loosen four screws from the latter to take it out, and at this point, it was clear what the problem was with a swollen C812 capacitor. 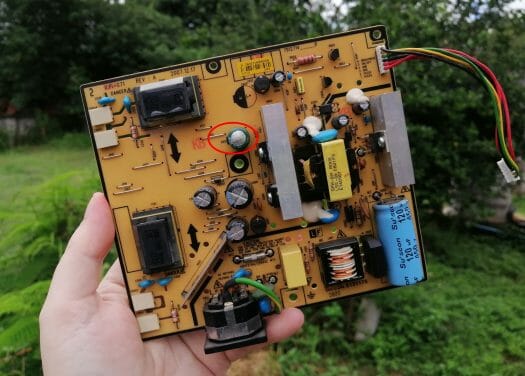 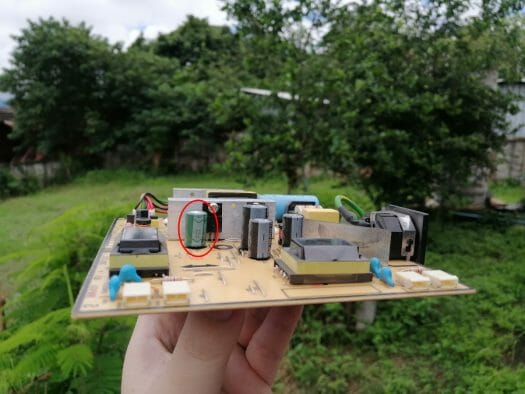 So no need to check anything with a multimeter or an oscilloscope, a visual inspection of the board could immediately detect the issue. I even asked on Twitter using the first photo (minus the red highlight) for fun, and many people guessed it right, so it indeed appears to be quite a common problem.

So I purchased a few 1000uF/10V capacitors online, and equipped with a solder pump and a soldering iron, I removed the damaged capacitor before soldering one of the new components. 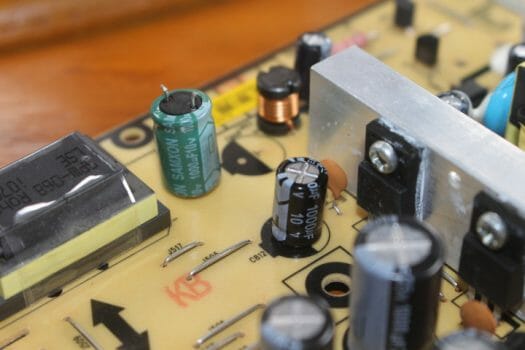 Now it’s time to reassemble the VGA monitor, but before re-inserting the back cover that is a pain to take out, I tested the monitor, and… success!!! Woohoo!!! 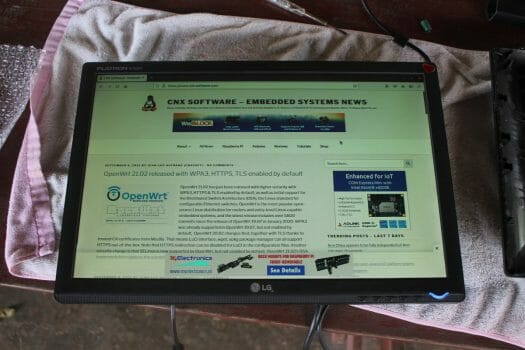 I reassembled everything, and I’ve now got a working VGA monitor. Total hardware cost for the repair: 24 Baht for 10 capacitors, or around 74 cents (7.4 cents per capacitor). Newly acquired knowledge: priceless!

This is indeed a good post.
You’re helping both people and the environment; people save money and they won’t throw away their broken electronics.
-Even those who can’t fix their monitor themselves, can probably find someone who can change a capacitor. =)

There are many other use cases than “100% sRGB local blah blah blah” for a monitor. I do have some for SBC testing whose color I don’t care about. They could even be black and white that would be OK. I’m also having a 20+ years old EIZO I recovered from a trash bin that’s being used as the console for my NFS server and that is turned on maybe 5 minutes every 6 months on average. It does make sense to fix such monitors when they perfectly suit your needs instead of replacing them with bigger and more annoying… Read more »

You might want to put a warning to go with this post, as the high-capacity capacitor on the AC side of the power board can cause some serious damage if it’s not discharged and someone touches it.

At least this way, you’re not going to get blamed if someone has an accident.

Yeah, personally I like to wait a few days at least. That’s probably overkill but generally something with a broken capacitor sits around broken long enough that it’s already been discharged by the time you fix it 😀

The screwdriver between the leads works fine as well and should always be done anyway, to be certain (better discharge the cap on it than on your finger :-))

Great! A few points worth mentioning here: as you said, very often a blinking led indicates a dead capacitor most often, visual identification is sufficient to spot it/them: 99% of the time, a dead capacitor has its top bumped. The last 1% of the time (when there are not pre-cut lines on the top), they leak some fluid on the other side. You always need to change all bumped capacitors at once, because many of them are connected in parallel, and if you keep a dead one with a new one, the new one suffers much more from having to… Read more »

If the problem is not so easy to find than a capacitor, you could always google the code found on the board or directly search it in aliexpress: ILI-071 in this case. You could find new working boards to replace yours for less than $20.

Note that many of the failed power supplies / backlights in old CCFL-lit monitors are because the CCFL tubes are worn past service. The power supply blows because the strike/arc voltage has become too high in a failing tube. If the power supply really is damaged, fixing it will just allow it to blow again. The ccfl tubes in the panel need to be replaced too, and in any better-made monitor, they’re the only part that has actually failed (they have a finite lifetime, usually only about 10,000-20,000 hours).

Not only “old” vga but almost all electronics can be repaired like this,
but i wonder how did you manage for those lamps to work that long 😉

you cant always tell only by how swollen capacitor is, tho

and just imagine how many electronics we recycle that could be repaired and donated for use, instead

In the long term modern panels can save you lots of energy. Some old large panels can consume 100 to 250 watts. New ones 15 to 35 watts. Assume 2500 hours of annual use. Also consider additional power caused by increased cooling due to warm hardware. You could save 600 kW of energy each year.

no annual use for long period of time,
thats what i ment.

CCFL lamps weren’t *that* bad. You could have around 5-8W for a 14 inch display, which is not that much. Some displays even use low-voltage inputs with laptop-like power bricks which remain barely warm to the touch during operation. It’s just that LEDs are much more efficient but I’d say that it’s in the 2-3x ratio, not 6x (and that’s already a lot).

I am not happy with this text of Yours.
It could stay like before, everyone happy, consumers satisfied with their need for buying new anything, distributors happy, chinese happy…
As I am doing this for last 25 years, looking other fools buying new items, collecting their crap…bringing them back to life.

Those old LG monitors are practically bulletproof when it comes to longevity (except for those caps).
I still have a couple of well-used LGs, one 5:4 from 2006, and one 16:10 from 2008 both still working just fine.
Yes, they are pretty obsolete by 2021 srandards but I don’t really need a latest gen. monitor with perfect color reproduction for something like displaying security camera feeds or using a Linux terminal.

I had the same twice on an LG monitor. IIRC the problem was with the biggest cap, which is a high-voltage one.