Cubieboard4 is a development board powered by Allwinner A80 octa-core processor with 2GB RAM and 16GB eMMC. I’ve already shown how to get started with the board using the pre-installed Android 4.4 image, and run some benchmarks in Android, so now it’s time to check out the Ubuntu Linaro 14.04 image provided by CubieTech. I’ll show how to install and setup Ubuntu 14.04 on the board using a micro SD card, run desktop applications like Chromium, Libre Office, and son on on the board, and complete the review with some Linux benchmarks.

Setting up Ubuntu on Cubieboard4

Firmware images for Cubiebord4 can be downloaded @ http://dl.cubieboard.org/model/cc-a80/Image/. Currently Android 4.4, Debian server, Ubuntu Linaro server, and Ubuntu Linaro desktop with LXDE desktop environment. That’s the latter I’ll use for the experiment, and two images are available:

I’ve just downloaded and flash the “card” image to a 32GB Class 10 micro SD card in a terminal windows in a Linux computer:

where X is the letter of your SD card, which you can check with lsblk. Be very careful as using the wrong letter may wipe out your hard drive, and you may consider using a virtual machine to be extra safe. This step also be done in a Windows computer with 7-zip and Win32DiskImager utilities.

Now insert the micro SD card into the board, connect the necessary cable, and power it on. After around 35 seconds, maybe a little more the first time, I get a usable desktop. Your own boot time will obviously be impacted by your micro SD card performance.

Firefox and Nautilus are not part of the default image, but I’ve installed them with apt-get, and added shortcuts to the desktop.

Usually, you need to run gparted or resize2fs to make full use if your SD card capacity, but this is automatically taken care of by the image, and my root partition was automatically extended to 30GB:

Since I’m connected to Internet via an Ethernet connection I did not have to configure anything else, except the timezone set with:

At this stage, you’ve got a fully workable ARM Linux computer, although if you want to use Wi-Fi, Bluetooth, and/or a printer more configuration work is required, but I haven’t tried any of these.

Cubieboard4 Usability as a Desktop Computer

The image is quite minimal, and beside Pacman file manager and a few other small programs, only Chromium browser is already installed. So I installed Firefox, Libre Office, Nautilis and Gimp with apt-get:

The system is quite responsive, although programs don’t quite load as fast as from an SSD or eMMC, and you need to wait a few seconds for Chromium or Libre Office to load.

Since the font looked quite poor in Chromium, I installed Firefox, but I had the same results. So finally I installed Ubuntu fonts:

and configured the web browsers accordingly leading to much better font rendering.

I’ve run the following tests in Cubieboard4 to show the performance, and what is working or not:

I also ran htop in a terminal to show the eight cores CPU usage. Sorry the video is not quite straight and audio is poor with SJ1000 camera.

The system is working quite well, except with YouTube videos which are not so smooth, because YouTube has now mostly switched to VP9 codec, and 3D support failed with “DRI2: failed to authenticate”. Candy Crush Saga worked fine, although not amazingly smooth, but performance is not that much different from my regular Ubuntu PC for that game. 2D hardware acceleration is supposed to be implemented (a80-xf86-video-fbturbo), but I’m not quite sure how to formally test this. H.264 and MPEG4 video could be played in VideoLAN with only one CPU core use confirming hardware video decoding support, but MPEG2, VC1 and H.265 codecs all failed.

In the screenshot above, I play Big Buck Bunny in VideoLAN on the top left corner, but since hardware video decoding is activated, the video won’t show in the screenshot, which is perfectly normal.

Even though Cubieboard4 Ubuntu support is not too bad right now, I still think ODROID-XU3 Lite delivers a better Linux experience, especially when using an eMMC module, as programs load faster, 3D acceleration is working, as well as Kodi with hardware video decoding. The only downside is that flash (Chromium + pepperflash) did not work when I tried on XU3 Lite, but this may have been fixed by now.

I’ve installed the latest version of Phoronix Test Suite to run a few benchmarks in Linux:

After configure the test suite for batch benchmark with

I decide to run the same three tests as on ODROID-XU3 Lite, encoding MP3, compressing files, and performing some HTTP server tasks:

Unfortunately, apache failed to compiled, so only the MP3 and 7-zip test completed. 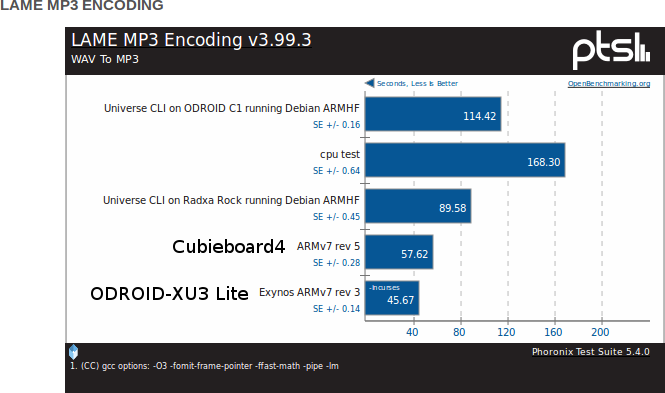 So the only direct comparison with the test I’ve done between ODROID-XU3 Lite and Cubieboard4 is for MP3 encoding, and in this test the Exynos platform is faster, but the Allwinner A80 board still compares favorably to slower or/and older ARM board like Radxa Rock, ODROID-C1, or PCDuino (cpu test) in 7-Zip test, especially this test runs on all available cores. 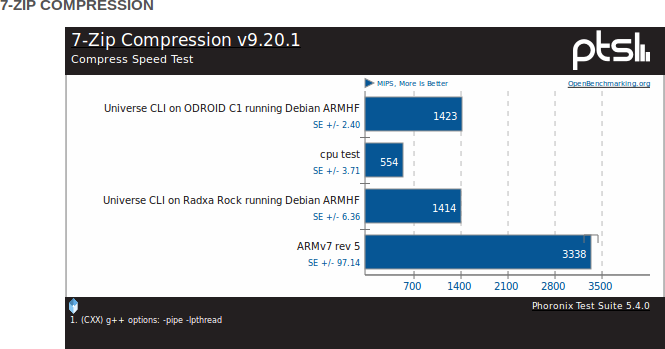 Now let’s see how fast the board build Linux 3.19.

Mainline kernel requires gcc 4.9 to build, but Ubuntu 14.04 only comes with gcc 4.8.2, so let’s install the new compiler. Since add-apt-repository is missing, we have to install the relevant package first:

We’ll also need to edit /etc/lsb-release to replace DISTRIB_ID=Linaro by DISTRIB_ID=Ubuntu temporary, as the toolchain repo has never heard about a Linaro distribution, and then we can complete gcc 4.9 installation.

Allwinner enginners themselves are not directly involved in mainline kernel develompent, but they are usually in the loop when members of linux-sunxi community send patchsets to the ARM Linux kernel mailing list, which mean Allwinner processor are supported in mainline kernel, albeit with limitation. Allwinner A80 codename is sun9i, and we can see a device tree file for A80 OptimusBoard:

Ideally video transcoding should not be done by software, since most ARM processors can handle MPEG2 to H.264 transcoding using the VPU, but this can still be useful to evaluate a processor performance, so just like for ODROID-XU3 Lite, I’ve converted a short MPEG2 into H.264 with avconc:

It took  3 minutes 3 seconds to convert the 44 seconds video, so just like with the Exynos board it’s not possible to transcode a 1080p video @ 25 fps in real-time by software, at least with avconv, and the parameters I used. ODROID-XU3 Lite was a bit faster however, managing to convert the same video in 2 minutes and 33 seconds.

Cubieboard4 can be purchased for $125 + shipping on R0ck.me, Eleduino, Seeed Studio, or others, and it’s also listed on Amazon US for $138.99 including shipping.