We’ve been used to getting better hardware for cheaper or in the case of Raspberry Pi model B boards a stable $35 price tag since 2021 with gradual improvements to the hardware. Many companies already had to hike prices for their board due to supply constraints, and Raspberry Pi Trading has become the latest victim of the increase in components with the Raspberry Pi 4 with 2GB RAM going back to its original $45 price tag, and the re-introduction of the Raspberry Pi 4 1GB for $35. We are told this is temporary, and once everything settles the Raspberry Pi 4 2GB should sell for $35 as was the case since last year. This is the very first price hike in Raspberry Pi (short) history. 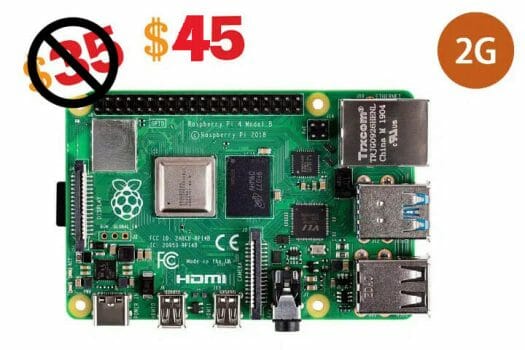 The supply shortage is not as bad as it seems though, as Raspberry Pi Trading expects to sell around seven million units this year, or about the same quantity shipped in 2020. It’s clear that without components shortage the number would have been quite higher. The less good news is they expect this to continue for most of 2022, and maybe that’s optimistic since I’ve read we may need to wait until 2023 for things to get back to normal.

No. The 2GB was available at $35 plus local taxes/P&P from authorised resellers.

You could get them below the official price at a Micro Center.

Ohh poor Upton & Broadcom… thanks cnx, this made my day.

Interesting since I remember seeing an article recently about how DRAM prices were going down. I’m sure this isn’t any kind of profit taking.

Right. For the next year or two I’m going to avoid all but the cheapest types of electronics to avoid all of the shortage prices.

The LPDDR4 memory used on the RPi 4 is normally used in mobile phones and some types of laptops and it’s quite different from normal DDR4 memory, which is the one coming down in price.
It’s actually quite similar to DDR5 in terms of how it works.

Let’s note that LPDDR4 has been succeeded by LPDDR4X and LPDDR5.

At what node are RPI 0 made one wonders.

As I understand it, the RPI 4 SoC uses 28nm, everything before 40nm.