2019 is closing to an end, or you may already be into 2020 while reading this post. In any case, that means it’s time to look back at 2019 and look forward to the events and new products to take place next year.

While 2018 was a boring year for new processors, 2019 brought us some interesting new chips such as Amlogic S922X / A311D, or the first Arm Cortex-A55 only processors such as Amlogic S905X3. Rockchip RK3399Pro was promising when it was announced last year, but it never really took off. It was a pretty quiet year for Allwinner as well.

There have also been the usual launches of mobile Arm processors from Qualcomm, Samsung, and MediaTek with a clear trend: “AI everywhere” since AI accelerators have become a must in all but the lower-end mobile processors.

It’s been fairly calm for low power Intel processors, as Gemini Lake processor suffered a shortage most of the year, before resuming shipment and we’ll have to wait until next year for Elkhart Lake processors. Several mini-laptops with screens of around 7″ to 9″ have been launched in 2019 continuing with the 2018 trends, but mostly based on the more expensive & powerful, yet low power Amber Lake and Comet Lake processors.

2019 has been a banner year for SBC’s especially with the launch of Raspberry Pi 4 last June, but competitors have not stopped with the likes of Orange Pi, FriendlyELEC, Hardkernel and Khadas launching some interesting Arm and x86 boards.

Espressif ESP8266 & ESP32 Wireless MCUs remained at the top of the charts in the Internet of Things space at least for hobbyists and makers, but there have been some other chips announced as well notably UNISOC WiFi 5 SoCs and boards, as well as more cheap Arm Cortex-M4 WiFi modules. In terms of LPWAN, I feel it has been more of the same with NB-IoT, LoRaWAN and to a lesser extent Sigfox dominating the news.

We continued publishing more reviews thanks to the help of Karl (3D printers, CNC…) and Linuxium (mini PCs), and I got some writers including Stephen, Ayo, and Siji to help me with the workload, and getting the site accepted into Google News feed.

I’ve used Google Analytics to find out which posts were the most read in 2019, so without further delays here are the top ten posts of the year in reverse order:

SBC posts dominated the top 10 list this year with the exception of PineTime, and Raspberry Pi 4 was part of 4 of them. In theory, articles posted earlier in the year would have an advantage since they’ve been online longer, but most articles that made the list were posted in June or later.

We published 922 posts this year against 892 last year. The higher number is partially due to the fact I did not take holidays, and that CNX Software got some writers to help you.

Let’s check out some of Google Analytics stats to find out more about what happens in terms of traffic and audience in 2018. 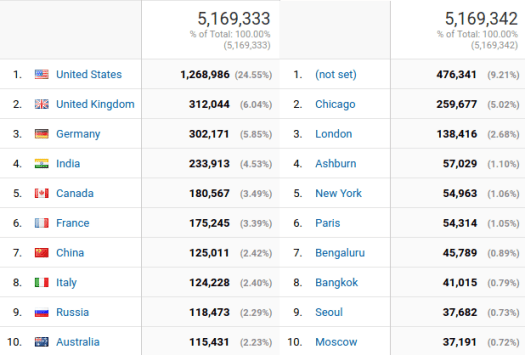 The United States, the United Kingdom, and Germany are still in the top three, but the latter switches places. The share of traffic from the United States rose from 17.96% in 2018 to 24.55% this year. Australia managed to kick out Spain out of its top ten position. The top three cities also changed with Chicago dethroning London from the top stop with the city in the third position being Ashburn. The tiny Coffeyville disappeared from the list, and a geolocation bug appears to have been fixed. 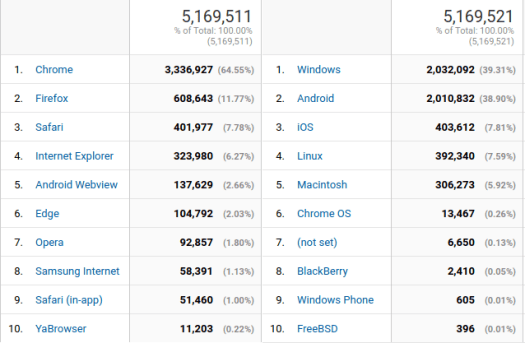 Chrome further consolidates its leading with a 64.55% share of traffic against 61.53% last year, and Firefox coming a distant second at 11.77% a drop from the 15.33% share it had in 2018. Windows is still at the top, but with 39.31% barely holds the lead to Android at 38.90%. Last year, Windows represented close to 50% of the traffic to the site, but this year mobile traffic further increased and Google informed us it would us mobile-first indexing on the website since the majority of the traffic now comes from smartphones.

That’s true at least for the second part of the year, as for the full-year Desktop traffic still has a 52.92% share.

Google separates Mobile and Tablet traffic and the later only has 3.95%, against 43.14% for mobile which last year had just 28.32% share.

Rockchip should have an exciting year with Rockchip RK3588 Cortex-A76/A55 processor for 8K STBs, and RK3530 quad-core Cortex-A55 processor for entry to mid-range TV boxes and SBCs. Amlogic also announced their first TV box processors with AV1 codec support namely S805X2, S905X4, and S908X. The first is designed for entry-level Full HD TV box, S905X4 is a mid-range quad-core Cortex-A55 processor capable of 4K video playback, and S908X is expected to launch at the end of 2020 with 8K video support and HDMI 2.1. It’s unclear what Allwinner is planning to do, as they just vaguely mentioned some tablet SoCs without many details, and often re-brand existing Cortex-A7/A53 processor for a given business unit. We should also see the first Intel Elkhart Lake mini PCs or laptop succeeding Gemini Lake sometimes in 2020 as well.

I’m also expecting some more RISC-V processors’ announcements notably from Espressif Systems and Samsung, but likely many others. The Raspberry Pi Foundation is also a member of the RISC-V foundation, but considering they’ve introduced a new Raspberry Pi board this year, a RISC-V RPi is likely more of a 2021 story.

IoT and Artificial Intelligence should still be sectors to follow for new innovative products and solutions. New communication standard such as 5G, 802.11ax (WiFi 6), 802.11ay, and Bluetooth 5.1 should start to ramp up in 2020 after initial deployments in 2019.

I’ll like to thank everybody who visited and/or commented on the site in 2019, and wish you all a prosperous, healthy, and happy new year 2020!

Happy 2020! To another year of great embedded & SBC reporting!

Happy new year everyone. A great article. The beginning of the year was very exciting with many new SBC’s. But the 2nd part of the year was very calm. I’m most excited by the Panfrost evolution mostly on RK3399. In a few months there’ll be perfect images for the RK3399s with GPU and VPU drivers. Now we’ve got both, but not in one kernel. I can’t wait for the RK3588. That should blow away everything I’ve got for the tasks I need it for. I hope it’ll have good thermals. For that the S922/A311D are awesome. But even more performance… Read more »

best wishes for all moments

Happy New Year to all the CNX readers. Thanks for the company in the past year. There will be more surprise from ROCK Pi in 2020.

Looking forward to the RK3588 as well. I somehow lost my Odroid N2 when family was visiting and don’t want to buy a new one. I will have to wait for this beast. I hope it is sub $100.

You mean a member “borrowed” it?