But it’s not all! The chip also includes supports for three HDMI 2.1 inputs up to 4Kp60, a 16MP ISP, 4K video encoding, and the more powerful GPU and higher memory bandwidth enable 4K user interfaces which were not feasible on most other Arm hardware barring the NVIDIA Shield. 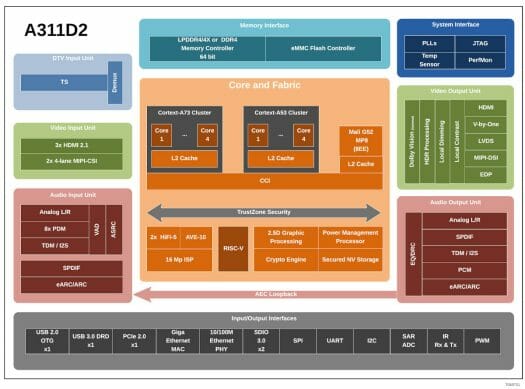 The quick reference manual does not include any specific information about an AI accelerator, except for an optional dual HiFi 5 audio DSP with Neural Network Extension for audio/voice processing, so there’s no indication about an NPU for computer vision application, but we’ll have to see. At first, I thought Amlogic A311D2 may be a variant of the long-expected Amlogic S908X, just like A311D and S922X-B are practically the same processor, but while 8K video decoding is supported, 8Kp60 video output is not.

I would only expect Amlogic A311D2 to outperform A331D in terms of CPU power in highly parallel tasks, but the real improvements are with the GPU, 4K video encoding, HDMI 2.1 features support, separate USB 3.0 and PCIe interfaces, HDMI inputs, and obviously the extra RAM, which would allow new applications such as multiple camera NVR’s, more powerful and versatile Arm Linux mini PC’s, SBC’s with additional high-speed interfaces, etc…

Nice. I wonder if this is a stop gap whilst e wait for the S908X SOC.

AV1 support will give it a longer life.

I suspect an Odroid N2++ soon.

I also noticed the risc-v core in the diagram, that also looks new

Yes, it appears to replace the Cortex-M4F core in A311D.

Nice, we’ll probably see it on an updated VIM3 or Odroid-N2+. I don’t think the 2 extra cortex A53 will bring any value here, however it allows them to play in the “octacore” court yard for very little extra silicon and likely a very little extra licensing cost, if any at all.

Your wish has been granted.

Oh that was fast, thank you 🙂

First VIM4 sbc-bench result flew in few hours ago. A kitchen-sink benchmark like 7-zip shows almost 25% more performance compared to A311D/S922X devices even with the A73 in A311D2 clocked only at 2.2GHz right now. Memory performance has greatly improved…

Once access to RAM starts to matter (e.g. 7-zip use case) with the A53 nothing changes but the A73 even when clocked slightly lower perform almost 15% better. So it’s more about an overall improved SoC design than those two extra A53 🙂

The title states octa core, but the table only mentions 6 cores. A typo?

Am I reading that right? The memory interface width doubled? And it’s clocked 25% higher? There’s your improvement right there.

Look at the VIM4: two H9HCNNNCPMMLXR-NEE next to each other (LPDDR4X, 2133 MHz, 32Gb). Curios how this will affect performance. I mean it’s still just lame/slow A73 here…

I’m quite a fan of better cores (the A55 is super nice in the low end space.)

I partially disagree. A73 isn’t *that* slow, it’s uneven. On some workloads it can be 25% slower than A72 and on others 50% faster. It’s less easy to optimize the code for it, but code optimized for A53 may run more efficiently on it than on A72. I found memory-bound workloads like compilation to work signifcantly faster on A73 clock-for-clock, but others like software crypto to be slower. However the S922X in Odroid-N2+ can run at 2.4 GHz and this will clearly compensate for the losses compared to A72. I guess the VIM4 could improve things on memory-bound workloads, because… Read more »

What would be a even a bigger killer would be if the made a s922x + without the LCD etc parts and gave it a G52 12mp bigger MP , keeping the memory bandwidth 64 Android and 16GB memory. Way beyond the Toaster 4 desktop Linux.

It’s nice and all that but I was hoping for at least A76 and even maybe some A78 at one point.
Apple is miles ahead and we can’t even get some A76 SOC for some decent boards and TV boxes.
Kinda makes me appreciate the low end Intel stuff, at least those work out of the box in Linux.

> Kinda makes me appreciate the low end Intel stuff, at least those work out of the box in Linux. That’s exactly the problem most SBCs suffer from: most of the time they’re not trivial to install, and once they stop responding you have to use a screwdriver and figure how to wire a serial console with a USB-TTL UART board to fix them. On a PC, you just connect a keyboard and screen, you enter the BIOS or boot loader and fix your boot. This trouble is acceptable when there is a significant cost saving, i.e. when using a… Read more »

Indeed. We are on a terrain that we are reaching x86 prices… from 2 years ago. I am looking for to all those x86 mini pcs that where 200 bucks(larkbox, etc).. they are gone. There is nothing on the table that you can actually buy. Thats why the odroid x86 sbcs is gone too.

The main cost of the newer arm sbcs arent the socs mostly, it’s the ram. Even the rpi now have 8 gb models.. you can expect an 8gb sbc to cost 35 bucks… that’s the same on arm and x86.

They are still on CHWI Aliexpress for EU from Spain

Given that A311D2 is said to cost as much as RK3588 anyone who’s limiting himself to ARM and just after ‘CPU horsepower’ is better served by something based on RK3588S. Almost twice as fast, probably less expensive and wrt software support let’s see what happens faster: A311D2 or RK3588(S) running without BSP kernels.

I’ve just received mine today with a bunch of accessories.

The A311D2 is designed for signage but has other uses, software is not the problem, it is getting Amlogic to allow the SoC designers to work with software writers.

Talking about VIM4? If so please include dmesg output already in the ‘unboxing’ blog post or at least early on when running the thing first time with Linux. Seems Khadas has a Jammy image based on 5.4.125 BSP kernel ready…

Here’s the dmesg in case you don’t have it already: https://pastebin.cnx-software.com/?0b3376bf5684148f#Hbgy899FKyqZ7sBBgWEQuSYUTGjAD9LiCpvTDgx9KveA

By the way, I had to disable load check in sbc-bench.sh as the load average is about 2.0 at idle. I can see it looks the same in other VIM4 results. It starts at 2.0 and goes to almost 10. It’s probably something Khadas needs to fix.

Well, average load somewhere above 1 is a well known symptom of running BSP kernels (not limited to Amlogic). Since on Linux ‘average load’ is not CPU utilization it might be worth a try to find processes that are stuck in D state:

PIDs 53 and 178 are the affected ones. What processes are these? As a starting point:

“cmdline” appears to be empty

Those must be part of the Amlogic BSP, because I can’t find any info on the web about those processes.

Thank you! I reported it to Khadas via their forum. Let’s see what happens (most probably nothing).

> I had to disable load check in sbc-bench.sh

Fixed with v0.9.5 (now also taking CPU utilization into account when average load remains too high). But would be still interesting which processes are to blame for loadavg being that high…

Hey do you have its TDP number?
I recently bought a TV box (beelink gt king ii) housing this CPU and it is wayyy too hot, about 88 degrees C, when I watch live stream (app is called Huya, a Chinese game streaming website)
Now I’m looking for water cooling modifications, just not sure if I need a fan, or just the radiator, or even just the water tank will do. 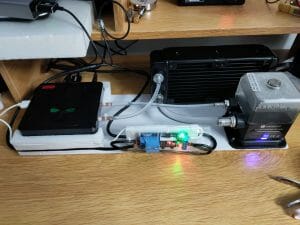