At this time, it is officially reserved for Windows Insiders part of the Beta Channel in the United States on eligible devices running Intel, AMD, and Qualcomm platforms, and at this time 50 apps are available with mobile games such as Lords Mobile, June’s Journey, or Coin Master, the Kindle app for reading books, and kids content that includes Khan Academy Kids and Lego Duply World. More apps are obviously planned, and as I’ll see later there are ways for any Windows 11 users to install Android apps. 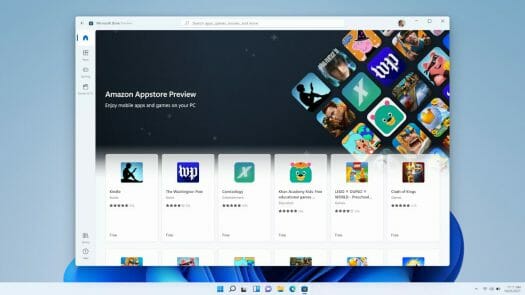 The Windows Subsystem for Android (WSA) is not installed by default, but it will be automatically installed if you either install the Amazon Appstore, the Amazon app, or any Android app from the Microsoft Store. The company says running Android apps and games on Windows 11 will feel the same as running Windows app with support for the new Snap Layouts feature, interaction with mouse, touch, or pen input, and support for Alt + Tab and Task view. Android apps notifications can be seen in the Action Center or it’s also possible to copy/paste between a Windows app and an Android app and vice versa.

Under the hood, Windows Subsystem for Android relies on the Linux kernel and the Android Open Source Project (AOSP) version 11, and as explained above, it is distributed through the Microsoft Store as part of the Amazon Appstore install. Just like the Windows Subsystem for Linux (WSL), WSA runs in a Hyper-V Virtual Machine. Microsoft also published documentation for Android developers that want to test their apps and make sure they work properly in Windows 10.

But what if you are not (or don’t want to be) part of the Windows Insiders program and change your location to the US. XDA developers has a tutorial that explains how to download and install WSA and side-load Android apps. Visit XDA for details, but to summarize you need to go through the following steps:

I find it awesome to see ads for toilet seats for the first time here on the right and the bottom, on an article about Windows… Is it a subliminal message ? 🙂