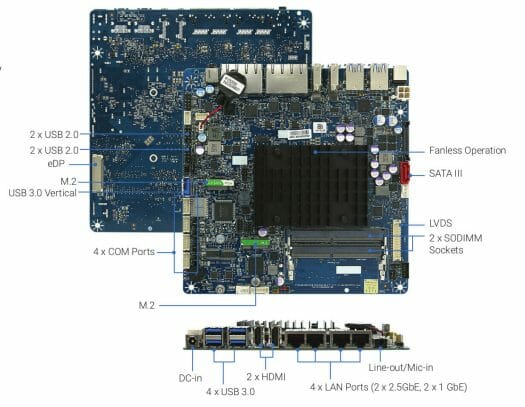 The company did not provide any information about software support, but we should assume Windows and Linux are supported. Pricing is not available either, but the motherboard is said to be sampling now according to the information on the product page.

This would be a great option for a custom router/firewall, but it’s likely to never be available in retail and it’s also likely to cost way too much to be interesting.

I think once the Chinese start using this SOC they will make something cheaper.
Most likely some mini PC.
I bought one such mini PC using the old z8350 and I am using it as Linux NAS , connected to a USB 3 hard drive.
It’s more than enough for basic tasks and Linux runs nicely on it.

And how is a mini PC with one Ethernet port going to be useful as a router or firewall appliance?

Easy. You put one or more $5 USB to Ethernet adapters from AliExpress and you are done.
It’s not ideal but it will do the job.
I was mostly thinking for a NAS. For router you can find special boards but it may take longer for the Chinese to use this SOC in those.

Sorry, but no, that’s not a solution, that’s a crap workaround.
Also, I think we have a very different idea of what a NAS is.

I use a gigabyte motherboard with J3455 CPU which has two NICs onboard, and then a PCI network card to give me another two ports. it’s a fairly tidy and power efficient solution.

I smell an oDroid H3 here. Too bad for just one SATA connector (I guess someone like HardKernel could make it with more SATA ports). It is the best news I read in a long time (now that RPi 4 has a higher price).

I think even USB 3 is decent if you’re not too picky but of course SATA is better.

I used oDroid XU4 as a NAS with an USB 3.0 HDD. It was ok for that time, but now I need SATA ports (I am now using an oDroid H2 with 2 SATA NAS HDDs). I am already looking for a mini-ITX board with low power consumption to replace H2, but I can live with the current setup for now.

But why do you want to replace oDroid H2? You are expanding your NAS capacity?

I need more drives in my NAS and I don’t want to sacrifice the M.2 slot. 2 SATA ports are too little for a NAS. I could get settle with 4, but now I know that the chipset cannot have more than 2 SATA and a M.2 drive. If it should have more SATA ports, it won’t have M.2.

> Too bad for just one SATA connector

The SoC is equipped with 2 SATA ports and both are exposed on this board. You get those cheap M.2 adapters with one SATA socket on the card for 1 buck or less.

And of course Hardkernel can add more SATA ports by using an additional PCIe SATA adapter. I hope they learned their lessons and skip cheap ASM106x next time and use a JMicron chip that supports also SATA port multipliers properly.

Hardkernel could also use terrible Realtek NICs again to save some money. Saving at the wrong end. But hopefully they won’t do that.

Got any proof that Realtek is worse than Intel? Yes, they used to be terrible, but these days there appears to be no difference.

I also tried to avoid Realtek in the past due to bad experiences (dating back decades ago, back when 100 Mbit/sec NICs from this company weren’t saturating the link but only the CPU).

But things have changed since, their USB NICs are great, RTL8111G or RTL8111H are reasonable choices for PCIe attached GbE and we had no problems at all dealing with RTL8125B so far.

Some links copied together and not sorted. Some things are no longer up to date. Some is still up to date. Some things depend on the used OS. Some problems (ASPM) come from Odroid H2+. Linux probably runs better than BSD. WORKAROUND : Horrible network performance of R8125B when connected to a 1GbE switch But in the receiving direction I only get around 234MBit/s.  rx_errors: 3745 > https://forum.odroid.com/viewtopic.php?f=170&p=300553#p300553 Thanks for the update. I tried this method and it does not do well with a “Realtek Semiconductor Co., Ltd. RTL8125 2.5GbE Controller (rev 04)”. It runs fine with Win10, Ubuntu and… Read more »

forum.odroid.com/viewtopic.php?f=168&t=40598: Just tried with 5.11, stable +940 Mbit/sec in both directions with RTL8125B to a 10GbE NIC via a Gigabit switch. No problems besides some retransmits in one direction that are normal in such a setup.

lore.kernel.org/netdev/[email protected]: So what? Bugs get fixed and who’s using 5.11 is not affected any more.

I investigated a little and realized that the SoC only supports 2 SATA ports by design, just as H2 with J41xx had. I can even live with just 2 Ethernet ports to bring the price down. They could have 2 versions: one with 4 Ethernet ports and the 2 native SATA and one with 2 Ethernet ports, but with 4 SATA or even 6 (2 native + extra).

And the same is true for all the other Intel Atom SoCs from half a decade ago up until now if their name didn’t start with x5.

BTW: this is x86. There’s no need to wait for Hardkernel or any other ‘SBC maker’ since there are tons of (main)boards available that should fit every need. And why do you as a NAS guy ‘need’ 2 NICs?

I actually don’t need 2 NICs for a NAS. I was thinking of using one for the Internet and one for local network access, so I don’t use only one NIC for all the operations, but I have not done that even for my current setup. Everything I found locally is too expensive and second hand boards are a mess (prices are all over the place and I don’t trust all these second hand hardware to be functional for a very long time). I am now trying to get a second H2+ to be put in the same cage as… Read more »

Who can can guess price for a potential oDroid H3 or a Chinese AliE available version with thos SoC?

There is only 1 left and if CNX allows the link a different make of j6412 goes for $357 before other costs.
https://eshop.aaeon.com/desktop-network-appliance-atom-x6000e-fws-2280.html

No 2.5Gbps ports on that one though.

Yes you are right, I made the post and the below Canadian dollar post to give a very rough idea of likely cost for such boards. There are several other j6412 boards out there.

@Theguyuk
Thanks a lot for the links.
Gave me an idea about the pricing!