If you’re after a network appliance with a recent processor and supporting pfSense you may be in luck. HUNSN RS36a is a mini PC-like device that comes with six Gigabit Ethernet ports, and features an Intel Core i5-1135G7 Tiger Lake processor with support for up to 64GB RAM, 2.5-inch SATA and mSATA SSD that is sold on Amazon for $527.99 and up.

The company says the system is compatible with many FreeBSD-based router systems, Linux distros, and Windows operating systems., and it has already been tested with pfSense, Untangle, OPNsense, and other open-source solutions for firewalls, VPN, network security, and so on. 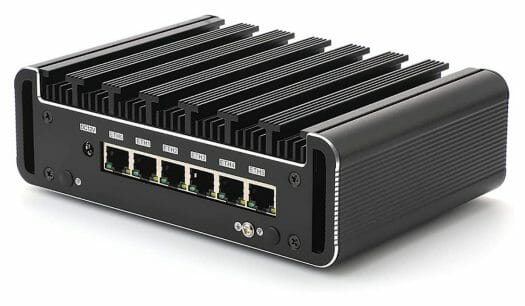 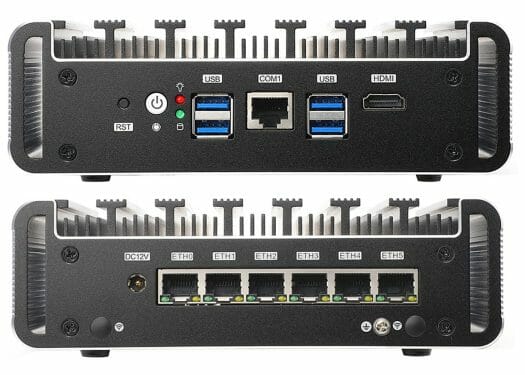 HUNSN RS36a ships with a power adapter, a power cord, and a warranty card. The company also mentions support for auto power on, network wake-up (WoL), system power management, and temperature management. If you’d like to get an idea about Intel Core i5-1135G7 Tiger Lake processor performance check out Beelink GTi 11 mini PC review and benchmarks with Windows 11 and Ubuntu 20.04. You’ll obviously miss firewall/pfSense benchmarks from that review, but that’s a start.

The $527.99 price is for a barebone system without RAM nor storage, and a complete system with 4GB RAM and 32GB storage goes for $573.99, while the highest-end model offered on Amazon is sold for $859.99 with 32GB RAM and a 512GB SSD. [Update: the price starts at around $435 on Aliexpress for the same model, but called Partaker H2. See comments section.]

If CNX allows, there are similar devices on aliexpress

I think it might be exactly the same under the Partaker brand. It’s quite cheaper too at $435.77 for the barebone model.

Still.
At these speeds, pfSense works great with any Haswell cpu and up, with 2GB RAM – kind of device you find in your shed…

I have a gigabyete dual NIC motherboard with Intel J3455 processor and the CPU usage doesn’t change during bandwidth spikes of 60Mbit, so I see this has hugely overkill.

Unless you’re going to be using it as some sort of video transcoding server, I don’t see the point.

I have an AMD E-350 mini-ITX motherboard from *way back* which handles >500Mb/s and it doesn’t show any load. Maybe if you’re running something more intensive than NAT you might need it or if you’re running *all* of those ports at full speed all day with tiny little packets? I just don’t know what the use case for this box is. It’s also got the ultra-mega IGP in it which doesn’t seem to be very useful for a packet router, either. Assuming BSD can even use a GPU that is. The article says the ports use intel i211 controllers, but… Read more »

> what the use case for this box is

Network separation? DMZ, LAN, MGMT, servers, IoT (where burglar alarm systems and all this crap you should never let into your LAN will reside) are already 5 segments. And pfSense can do ‘a bit’ more than just NAT and packet filtering (talking about Snort, Suricata and the like).

But as you and others mentioned: the specific CPU/GPU combo doesn’t make lots of sense for this use case…

I guess we’re looking at it differently. You’re asnwering “What can you do with this box?” While I’m more asking “What makes best use of the resources of this box?” Yes, you can do all kinds of fancy packet filtering/routing with it (or with may other more built to purpose router boxes), but you don’t need the resources of this machine to do that.

I was expecting you to comment on the NICs they chose. Did they pick good ones?

Even at GbE for running Suricata or another IDS with a bunch of rules the i5-1135G7 can already be a bottleneck, especially when configured for a low(er) TDP to meet passive cooling requirements 🙂

And wrt NICs: if you’re concerned about your server being backdoored combining an Intel CPU with Intel NICs is most probably not what you want (Intel AMT / ME)

As for being overpowered, it really depends on what you’re running.

Here we’re talking about 6 x ~950 Mbits/sec. Those J3455 / AMD E-350 boxes are nice as a packet filter between WAN and DMZ (though I would pay special attention to Intel AMT or whatever similar AMD stuff exists) but behind you might need something more powerful able to separat a few more network segments than just two.

BSD is slower than Linux for networking. IPFire (linux based) is much faster than a *sense. “BSD also limits the maximum throughput per connection. Single connection on OPNSense will not utilize full capacity of multi-core CPU. (this is often not important unless you have a gigabit internet connection)” IPFIRE: “It utilized all CPU cores, making it very fast on multi-core CPUs”. https://teklager.se/en/best-free-linux-router-firewall-software-2019/ Therefore try IPFire. Disadvantage of IPFire. There are only three or four zones and little VLAN. If you can live with that, it is very good. (IPFire 3 will largely remove these limitations). I have IPS (Surricata) with… Read more »

Yep. I’ll go even further and say 10 Gbe NICs are needed (because I’m pretty sure this can probably do more than 2.5 Gbe.)

This is perfect for home prod and lab all in one. Install ESXi and go with pfsense as primary firewall-router. Then go wild with VMs and VLANs as tkaiser mentioned above. Or go with unRAID for transcoding with the internal GPU and all the above on Docker and KVM VM’s.