Power supplies would typically transform AC mains to DC voltage with the use of transformers, rectifiers, or filtering, but Amber Solutions’ AC Direct DC Enabler chip claims to do without those old tech electromechanical components by enabling DC extraction directly from AC mains through solid-state architecture.

The company claims the technology leads to dramatically smaller size footprints, while simultaneously “delivering a much more dynamic, configurable power delivery capability”. Consumer, commercial and industrial electrical products manufacturers and semiconductor companies can already evaluate the technology as the AC Direct DC Enabler is now available as a demo kit. 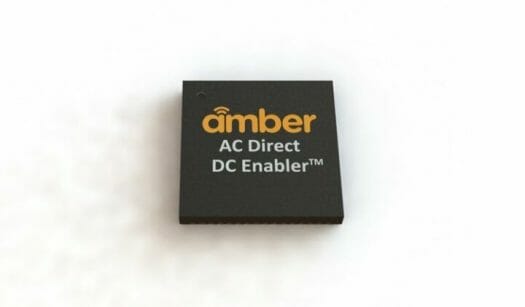 The company made bold claims even announcing the death of transformers:

The magic of the Amber AC Direct DC Enabler is that it allows manufacturers to add modern intelligence and enhanced functionality to new and existing products using much smaller silicon chips to manage and deliver DC power. Using a single silicon chip, this patented AC Direct power delivery system provides increased reliability and dramatically smaller size than today’s standard bulky AC /DC power converters, which will eventually disappear and become a relic of our analog past.

It may also end up being quite cheaper since it can eliminate up to 50 percent of the components in standard analog power converters, smart features like energy usage monitoring can be integrated, and another claim is that the risk of electrical fires will be greatly reduced:

The company envisions a world where every circuit breaker, outlet, light switch, appliance, and more are embedded with Amber’s silicon-based intelligence, enabling connectivity and communications in real-time, providing unprecedented insights into energy usage, novel control schemes such as integrated voice control and even potentially reducing insurance costs as electrical fires become a thing of the past.

If we believe the illustration above, Amber’s current solid-state solution is 28x13mm, but the company is working on a 20x10mm chip as well. If I understand that correctly 110-230V AC would be fed directly into that silicon chip which would then deliver 5V DC or another voltage. There are some technical details on the technology page:

So it’s clearly not suitable for typical home appliances, but many electronic devices will qualify including phones (no Quick Charging), TV boxes, LED lights, entry-level single board computers, and so on. Since the chip is so small it will most probably be integrated directly on the PCB instead of a separate power supply in most cases. One of the first customers of Amber will be Infineon Technologies.

While manufacturers can evaluate the technology with the AC Direct DC Enabler evaluation platform today, it will take longer for commercial devices to be launched since a production-ready silicon chip format is scheduled for release in early 2023 or sooner.

Additional information may also be available on the press release.

This thing is not new. To transform AC to DC without transformer is quite easy BUT to have a good efficiency (more than 95%) is not easy.
I think they used capacitors transformer with high speed switching.

In their patent they used a pair of FETs. The scheme in Figure 10A here.
https://sound-au.com/lamps/dimmers.html

There might be certification issues (at least here in the EU) to apply this in consumer devices. Not sure what the UL certification says about that.

Also what is the efficiency of this solution compared to traditional ones.

Like all marketing, this is of course loaded with exaggerations. Many current AC/DC converters are much smaller than the size given for “the world today”, though it depends a lot on the power requirements. Just look at smaller USB converters, or the converters present in smart bulbs, some fitting in bulbs as small as E14 candles or GU10 spots. The size is highly dependent on the power required, so their solution is probably smaller than current solutions for 15W, though it would be interesting to compare with GaN-based converters (they are currently mostly for larger capacities). Note that they say… Read more »

> Note that they say 5W per cubic inch, which really isn’t that small (and inconsistent with the other figures).

You make an excellent point. I’ve been keeping in my computer bag an Energizer USB PSU that’s 5V/2.4A theoretical but easily delivers 3A, in about 1 cubic inch, plastic enclosure and USB connector included. And I think I bought it 7-8 years ago. So that’s probably closer to 15W/in^3 than 5W/in^3.

I guess they do the same as we do with sound processors. They use signal processing to open a thyristor only at specific moments of the sine wave.

In this case we will have big issues in electric network if this solution went to mass production.

Hot power supplies are used everywhere. https://www.power.com/products/linkswitch/linkswitch-tnz And the problem with them? They are HOT power supplies. The ground has live AC on it. That makes them dangerous. A more interesting technology is PCB transformers or transformers etched into silicon. There are a few companies selling small power supplies with transformers in the silicon. Also, it has been possible to make solid state GFCI and Arc fault circuit breakers for at least twenty years. It is simply not cost effective. It is hard to beat high volume metal forming and automated assembly. GFCIs may be expensive because of high margins… Read more »

Not sure what is mechanical in the “electromechanical” components in the current AC/DC switching power supplies but I’m very curious what is so different from current LED drivers without galvanic isolation and what other application they could have in customer appliances where the Ground is exposed (for different kind of ports).

I see nothing new in this ‘patent’. All of that is well know in the industry. Maybe some tiny spec of it is new, but I couldn’t find it. There is a reference design at ST Micro that is 95% identical. The ST Micro short circuit detection is better than theirs.
https://patentimages.storage.googleapis.com/86/61/df/52c4b864caa9bd/US11170964.pdf
I have been working on variations of this for over 20 years.

This company is heavy on the PR and light on the goods. Smells like a patent troll to me,

I often value your input here, but how can a company be a patent troll if they are making a product? That simply doesn’t compute.

Look at their patents, they are in ten different areas.

And their are degrees of trolls. Some are pure lawyer trolls. Some hire engineers to build prototypes and make patents. This firm seems to putting much more effort into patents than products.

Let’s see how they behave. Will they actually sell product, or will they go around strong arming people to ‘license’ things?

For example Sonos started off as a decent company, now they are turning into a patent troll.

Here is the Sonos mess. https://yro.slashdot.org/story/22/01/07/0055240/google-found-to-have-violated-sonos-patents-blocking-import-of-google-devices Sonos has an idiotic patent on a single volume control for controlling multiple speakers in a group. So Google has to change Chromecast groups to get rid of the group volume control or switch to individual volume controls per speaker. Or they can pay Sonos $55M to ‘license’ the concept. So for the next 20 years every time you use an Alexa, Chromecast, Airplay, etc speaker group you can thank Sonos for having to futz with individually volumes on each speaker. Of course if Google pays $55M for this one, you can bet that… Read more »

I had a friend who worked at the EPO in Europe, and at the time (about twenty years ago) he told me software patents did not exist in Europe. It might be a US thing, although I think I’ve read about people fighting against software patents in Europe as well.

They *do* exist in europe. Some companies file a lot of stupid ones as well. It’s like nuclear weapons, usually you don’t want to use them, but just in case they can hurt. And they’re valued by investors, which is the real danger of this crap. I think they could be beneficial if they were limited in time to 2 years only, to let small startups try to make a revenue from a good idea without being copied and replaced by giants putting 100 times more people on it. And for me in any case a patent ought to be… Read more »

I guess you’ve never been to CeBIT when Fraunhofer turns up with the police to shut down exhibitors for not paying the license fees, even though said companies aren’t selling products in Europe?

And of course it’s so easy for the USPTO to ignore all prior art… Decades of dual-channel potentiometers used to adjust volume on several channels at once, etc… Such stupidity must really disappear. At least with largee companies like google, sonos is taking some risks of not existing anymore. First, large companies collect so many stupid patents that virtually everyone infringes on some of them including their attacker; second, risking to disappear from the world’s most used search engine isn’t going to help their business.

It’s almost like a startup would have to file a stack of mediocre patents to have any chance against big tech companies. The thing about companies that only license their parents (eg patent trolls) and selling a product is they can’t say a non-existent product infringes, so big tech companies can’t claim counter infringement

One of the most space-consuming thing with mains is the capacitor that you need to maintain a bit of energy between the rectified pulses. No matter what you do, as you don’t change the mains’ frequency, you have to store that energy for the 5 or so milliseconds where the voltage is lower than what the chip needs.

Not a good idea integrating mains onto a pcb. At least an SBC PCB without a case, made to tinker and expand… Even inside PCs you have only 12V

Next they’ll be claiming it contains a DC transformer.

Maybe thats the only way to fix the system…purposefully make the problem bigger instead of trying to diminish it and failing…so it finally gets due attention.

Who will be the first one to get electrocuted? We all know that transformers provide galvanic separation from power lines, but some guys feel bores with this safe fact.

Isn’t that a rectifier, a transformer would change voltage or amps

Hmm, the schematic looks really simple and common, and no patent regarding AC/DC enabled itself I could find online just in their nonrelevant patents I found some schematics of that magic AC/DC 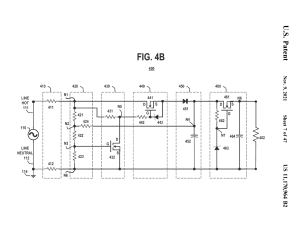