CANFDuino is an Arduino-compatible dual CAN bus platform with CAN FD support that can be used for both prototyping and deployment on the field thanks to its rugged aluminum enclosure, two DB9 CAN connectors, an IO terminal block.

The board is powered by a Microchip SAMC21G18A microcontroller with CAN-FD support, a MicroSD card slot, a micro USB port, various analog and digital I/O, as well as a prototyping area allowing users to solder their own components to the board if needed. 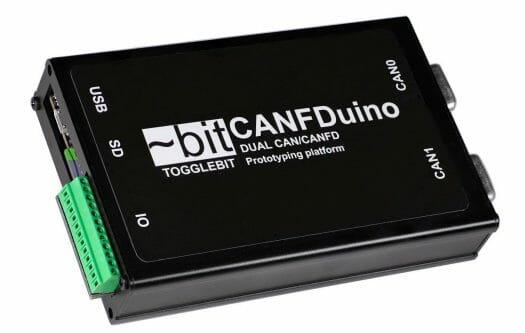 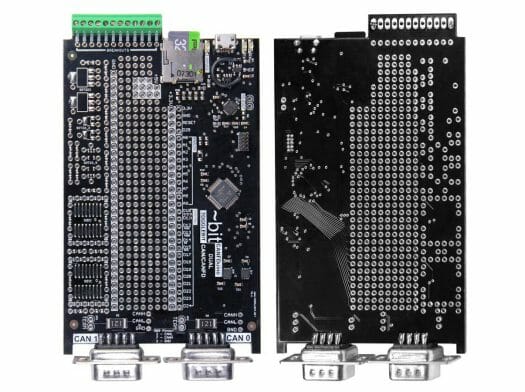 The resources to add support for the board to the Arduino IDE can be found on Github, and once installed you’ll have access to code samples to play around with the CAN ports as well as other I/Os. The board can be used for a variety of projects including CAN-FD bus sniffing from a web browser or terminal program, CAN-FD-bus gateway, OBD2 data logging to SD card, remote telemetry, fault simulation, sending analog or digital input to CAN FD or vice-versa, and so on…

Togglebit has just launched CANFDuino dual CAN Arduino-compatible platform on Crowd Supply with a single reward of $125 for the board with its metal enclosure. Shipping is free to the US and adds $15 to the rest of the world. While the Crowd Supply page reads “orders placed now ship May 06, 2022”, the company says this should only be valid for the first 20 pieces:

Please note that only the first 20 CANFDuino units are likely to ship in 2022. Because of the global chip shortage we are living through at the moment, lead times should be taken with a grain of salt, but—according to those wild estimates—we will not receive the components we need to fill subsequent orders until early in 2023.