MangoPi-Nezha MQ tiny developer board with Allwinner F133-A (aka Allwinner D1s) RISC-V processor with 64MB on-chip RAM has just launched on Crowd Supply for $39, and delivery is expected in July 2022.

The 4x4cm development board comes with a MicroSD card slot, display and camera interfaces, an on-board microphone, as well as WiFi connectivity, two USB Type-C ports, and two 22-pin headers for expansion. 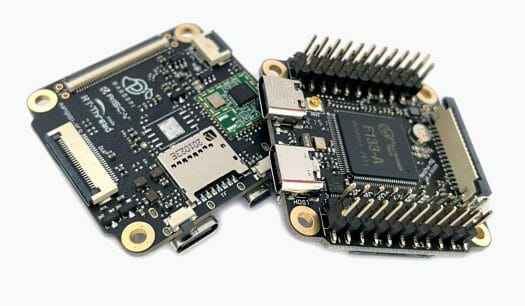 MangoPi-Nezha MQ RISC-V developer board can run Linux-based operating systems such as Tina Linux (OpenWrt) or lightweight version of Debian, in combination with LVGL open-source graphics library to design GUI on the platform. But since the crowdfunding campaign is managed by RT-Thread, the board can also run RT-Smart described as “a high-performance microkernel operating system for professional, real-time applications”. The company further explains

microkernels fill the gap between traditional real-time operating systems (RTOSs) and heavier solutions like Linux. As a result, platforms like RT-Smart tend to do a better job of balancing real-time performance, cost, security, and startup speed.

Since we’ve written several times about RT-Thread real-time operating system, including a getting started guide for Bluetrum AB32VG1 RISC-V Bluetooth audio board, I asked the company about the differences between RT-Thread and RT-Smart, especially they share the same Github repository, just in different branches. I was pointed to an article on opensource.com that describes both OS, and includes a table showing the main differences (Note RT-Smart used to be called RT-Thread Smart):

RT-Thread also compares the MangoPi-Nezha MQ against three other small Arm and RISC-V WiFi boards including the first Allwinner D1 development board, Raspberry Pi Zero W, and the lesser-known SIN-V3S SDK board. 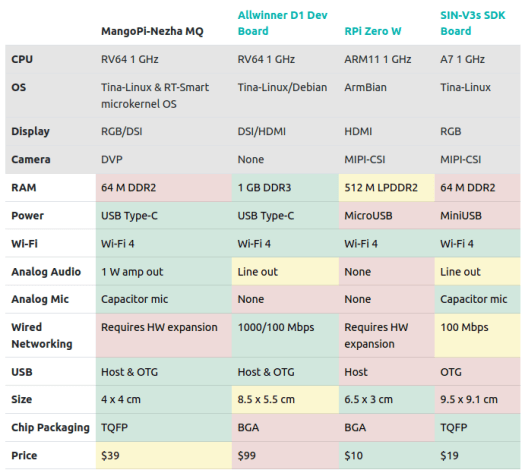 The $39 price tag is not overly attractive here, even with free worldwide shipping. and I assume there may be several reasons with Allwinner trying to ride the RISC-V hype, and profits being shared between RT-Thread for software development and MangoPi for the hardware. A more direct competitor might be the Sipeed Lichee RV RISC-V starter kit that goes for about $23.90 + shipping with Allwinner D1, 512MB RAM, HDMI video output, and a WiFi+Bluetooth module. It should also be noted that a MangoPi MQ Dual is also coming with the same PCB as MangoPi-Nezha MQ, but an Allwinner T113-S3 dual-core Cortex-A7 processor with 128MB RAM replacing the RISC-V processor.

Ouch. Comparing it to Nezha instead of LicheeRV is just disingenuous. Double the price of the LicheeRV with 1/8th of the RAM is not where I expected this to land after so much hype. Well, good luck with that!

One thing I initially missed is that shipping is included in the $39 price stage for the Nezha board. But still,l the price for the LicheeRV kit would be $30 in total to the US.

mmm is a bit expensive but prices for everything are crazy right now.

I really don’t understand what the MangoPi people are thinking. What is the unique selling point of their device?. Maybe “Get less, pay more!”

I think Sipeed may have a special relationship with Allwinner, as I know at least one other person that tried to make an Allwinner D1/D1s board, and the price was too expensive.

Could be. But then there is no market for the 39 USD board (about the MangoPi twitter account itself said some time ago “How abaout 10 USD?”)

And people are complaining about RK3588 price lol.