Renesas has launched its first RISC-V processor family with the RZ/Five general-purpose microprocessors based on an Andes AX45MP 64-Bit RISC-V CPU core, and with long-term Linux support via the industrial-grade CIP Linux that offers maintenance for over 10 years.

The RISC-V processor is pin-to-pin compatible with the Arm Cortex-A55/M33–based RZ/G2UL processor family, and while being a general-purpose family, the RZ/Five chips are specifically well-suited to IoT endpoint devices such as gateways for solar inverters or home security systems. 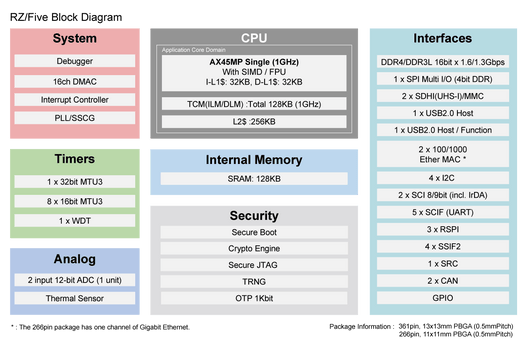 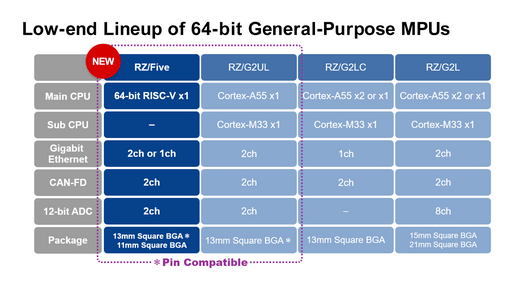 As can be seen from the table above, RZ/Five is basically the RISC-V equivalent of RZ/G2UL Arm processor, except it lacks a sub-CPU (Arm Cortex-M33), and there’s no display/camera function at all (RZ/G2UL comes with a parallel interface for displays, and a 4-lane MIPI CSI interface for cameras).

As mentioned in the introduction, Renesas RZ/Five processors run Linux, more specifically Civil Infrastructure Platform (CIP) Linux designed for industrial application with long-term maintenance support of more than 10 years. The RZ SMARC Evaluation Board Kit will be offered with a SMARC 2.1 compliant carrier board, that will allow to easily test Renesas RISC-V (RZ/Five) and Arm (RZ/G2UL) since they share most of the same interfaces.

There’s limited information on the product page at this stage, but eventually, I’d expect plenty of documentation and resources just like for the Arm version with a Yocto Linux BSP, a user’s manual, PCB design guides, SMARC PCB design files, and much more. We’ve also been told that Andes has worked with Renesas to make an open manual for the AX45MP in order to make Linux programming easier, and it should be available in the next few days/weeks.

Renesas says samples of the RZ/Five RISC-V MPUs are available now, and mass production should start in July 2022.

Thanks to Mipl and Florian for the tip.

Typo? “Only on Gigabit Ethernet port” maybe *one* Gigabit port?

Really nice piece of silicon. Waiting for a development board release :).

This could be an interesting chip for industrial use; the ARM versions start around $8 at Mouser (but aren’t currently stocked).

So seems riscv has left tao bao and reached the mainstream