Released over 10 years ago, Arduino UNO is still the best-selling Arduino board, but lacking WiFi in the IoT era is not ideal, so Gianluca Martino, Arduino co-founder and working with the company until 2015, decided to design the Jolly DIP module based on ESP8285 WiFi chip that can replace the ATmega328P 8-bit AVR DIP-40 microcontroller.

Since ESP8285 cannot provide all I/Os, notably analog inputs offered by ATmega328P, Gianluca combined it with the ATMega328PB microcontroller in a compact SMD package to offer firmware compatibility plus WiFi connectivity in the same DIP form factor. 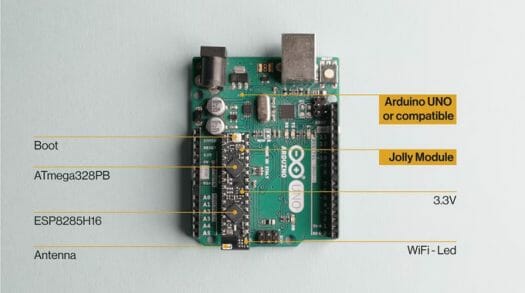 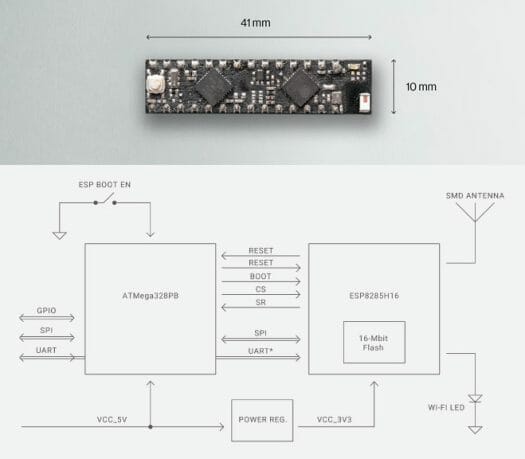 The Jolly WiFi module offers a solution that’s neater and more compact than adding WiFi through an Arduino shield or module connected through jumper cables. The price is not excessive, although not incredibly inexpensive with the Jolly module going for 12 Euros on a crowdfunding campaign on Kickstarter. Shipping from Europe is however somewhat pricy with shipping adding 8 Euros to Spain, 9 Euros to other countries within Europe, and 11 to 13 Euros to the rest of the world.

I get the appeal, but why not use a higher-tier AVR, one that’s compatible, but has more pins to support both Arduino I/O and ESP8285 connection?

@Marcin Dąbrowski said: “I get the appeal, but why not use a higher-tier AVR, one that’s compatible, but has more pins to support both Arduino I/O and ESP8285 connection?”

The specs for the ATMega328PB are completely wrong. It’s got 32K of ISP flash, 2K of SRAM and 1K of EPROM. There’s a type on the web page for the part, but the number and the datasheet agree, this is just a normal 328. If it had the specs they’re talking about it’d be a 648. That aside, I do not see the appeal of this board. The 328 are hard to find these days, so why design a board to ‘replace’ one of them if you require one of them? All this does is add wireless to an UNO… Read more »

@David Willmore said: “The 328 are hard to find these days, so why design a board to ‘replace’ one of them if you require one of them?”

So yeah almost 10X the usual price, plus there’s a good chance the chip is fake to begin with. You might actually be able to buy some 😉 though! But remember, it “is” lcsc.com in China you’re buying from.

Yeah, and the replacement board *contains* a 328 on it! So, you’re not replacing it at all, you’re supplementing it with a wifi chip. You still need a 328!

I like the comments here. Just I thought when I heard about this idea some months ago. This thing has no real advantage in the advertised use case on an Arduino Uno board. As stand-alone would it probably at least have a chance, but that’s not how it is advertised.
I made once a module in DIP28 size and pin-compatible with an Atmega328, but based on an ESP32. It even had a micro USB port for programming on board. I would rather liked to have seen something like that.

Too little, too late.

I think it would be more reasonable if there was a junction between a RISC-V MCU and an ARM MCU.

Neither of which make any sense here. The 328BP is here because it provides the I/O from the 328P and the esp is here because it’s wireless, fast, cheap, and available. None of the chips were chosen for some reason so irrelevant as the processor’s CPU architecture.