Waveshare CM4-Duino is a carrier board for Raspberry Pi Compute Module 4 (CM4) that follows Arduino UNO R3 form factor while offering HDMI output, a MIPI CSI camera interface, a USB interface, and even an M.2 M Key socket for expansion.

This allows the board to reuse most Arduino shields while offering the flexibility of a more powerful Arm Linux platform that can further be expanded with an NVMe SSD or a wireless module through the included M.2 socket. 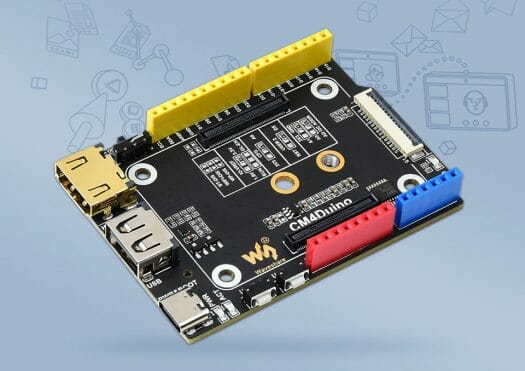 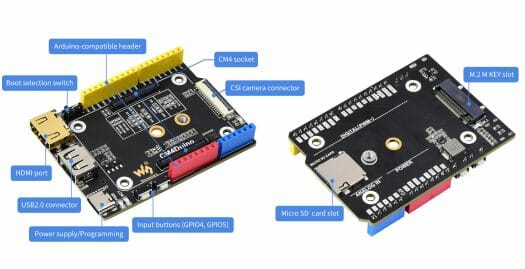 There’s a Wiki for the board, but it’s currently empty. If the board looks familiar that’s because Diodes Delight Piunora is almost exactly the same Raspberry Pi CM4 board with Arduino form factor. The main differences are the lack of Qwiic connector, the use of an M.2 M key socket instead of M.2 B Key socket in the new CM4-Duino board, as well as different positions for some of the connectors and buttons.

Piunora’s documentation includes a Raspberry Pi OS image preloaded with Adafruit Blinka (CircuitPyhon for Linux) which may also work on CM4-Duino, possibly with some modifications since the ADC chip is different (MCP3008 vs ADS7830).

CM4-Duino is sold for $24.99 plus shipping ($6 to the US) on Waveshare online store, while, for reference, Piunora can be purchased for $39 plus shipping on Seeed Studio, Crowd Supply, and other distributors. There’s also a Piunora Lite version without the M.2 socket and camera connector. You would also need a Raspberry Pi CM4 which may be challenging to purchase with the current supply shortage.

Arduino design is mostly well received. Also this reminds me of C.H.I.P pc . But yes supply is a big issue for all RPI & if available charges are high.