The Raspberry Pi 4 is a pretty cool board, but if you wished it was just a bit smaller, and you could use the PCIe interface exposed by the Broadcom BCM2711 processor more easily, Timon has designed Piunora carrier board for the Raspberry Pi Compute Module 4.

The solution provides a board with the guts of Raspberry Pi 4 SBC but using the Arduino form factor including access to the six ADC pins, and an M.2 socket with the PCIe signal from the Broadcom SoC. 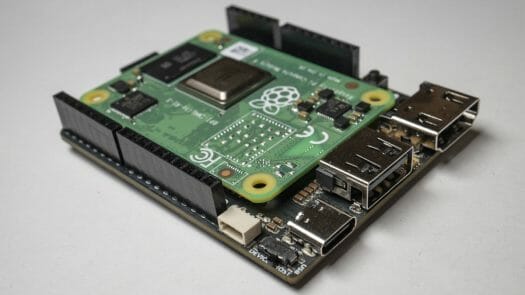 Most Raspberry Pi 4 applications would be suitable for the board, but Timon designed it specifically with CircuitPython in mind, as he intends to mount the Pi as a USB gadget instead of a host device, and follow the same development workflow as a normal MCU development board directly on the computer. The board will be open-source hardware with all design files released once shipping starts.

Two versions of the board are offered with the full-featured Piunora Pro, as well as Piunora Lite with a thinner form factor that removes the camera connector and the PCI-e M.2 port. As a side note, one of the photos shows a Raspberry Pi RP2040 board that slots into the M.2 socket, but no details are provided at this time.

Piunora has just launched on Crowd Supply with a $15,000 funding goal. Rewards start at $30 for Piunora Lite, and $39 for Piunora Pro. You’d still need a Raspberry Pi CM4/CM4Lite module to have a working system, and some are offered on Crowd Supply. Shipping adds $8 to the US, and $18 to the rest of the world with deliveries scheduled to start at the end of June.

[Update: This article was initially published on December 24, 2020, and updated on March 31, 2021, with the launch of Piunora on Crowd Supply]

Ah, I found the answer in Timon’s tweets: “Well I expect that people wanna slap SSDs in there and I checked some on the market and many use around 9-12W which gets really quite tight. The smaller B+M key SSDs might use less.”
So, yes SSD capable.

You can use for example geizhals.de to search for M.2 NVMe SSDs with ok-ish power consumption that are also B/M keyed.

The PCIe is used for the USB ports in Raspberry Pi 4 board.
The board uses an M.2 Key By socket, and it works with compatible cards like the Coral AI card shown on the picture, but I think it’s difficult to find an M.2 NVMe SSD that fits that type of socket. AFAICR M.2 Key-M NVMe SSDs are more common.

Many should be B + M, but B is also often used for SATA which won’t work here

Yes the WD SN520 (also sold under SanDisk brand) is working well. It’s true you get less selection but there are several available that are NVME and B+M.

Unfortunatly this time the CM module does not have SDIO available, so you are stuck with EMMC only and their wifi module.

Hi, the CM4 has the SDIO interface available. You have the options between the Lite version without eMMC and the eMMC variants. Thats why there is an SDCard connector on the board.

Seeed Studio appears to have stock for Raspberry Pi CM4 too.