Rockchip RK3566 processor is designed for AIoT applications like NVR systems, but we’ve seen it integrated into mini PCs, TV boxes, and now a gaming handheld with the Anbernic RG503 equipped with a 4.95-inch OLED display.

The portable gaming console also includes 1GB LPDDR4 and 16GB storage, plus an optional 64GB microSD card with 4193 games, all the buttons you’d expect from a gaming handheld, plus micro HDMI output for connection to a larger screen. 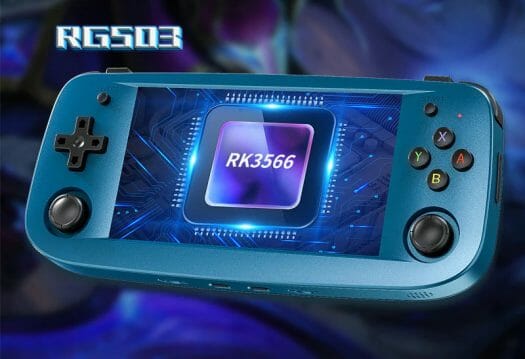 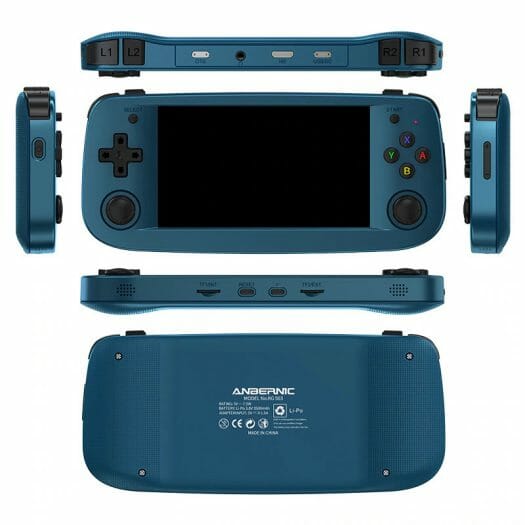 The device runs Linux (EmuELEC fork) and should be able to handle PSP, Dreamcast, Nintendo DS, Nintendo 64, and PlayStation 1 emulation. Some noted that 1GB RAM may be a limiting factor for some games. Interestingly, the device does not seem to include any eMMC flash storage, and instead relies on two microSD card slots, one for the OS (16GB card), and the other for games. It should be interesting for people wanting to try alternative OS. 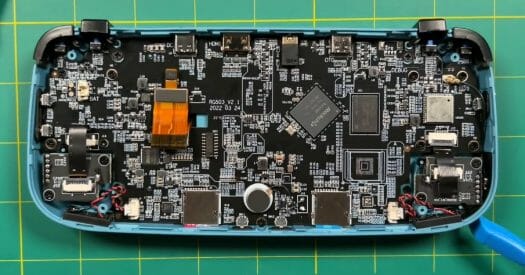 Unless I’m mistaken, I can also see the footprint for an eMMC chip that is currently unpopulated. Rockchip RK3566 might seem like an odd choice for a portable gaming console since most interfaces are not used, but it does benefit from the efficient Cortex-A55 cores for longer battery life, and Arm Mali-G52 EE GPU supports the latest graphics APIs. Retro Game Corps has uploaded a review on YouTube that also includes a teardown (hence the board’s photo above).

Anbernic RG503 gaming handheld is now available for around $150 on Banggood, Aliexpress, or directly from Anbernic’s store. Getting the model with a 64GB microSD card with thousands of games adds $8.

Via Liliputing and Obscure Handhelds

Meh – Ambernic as a company seem to bring out new products every month or so, and none of them are very exciting. They always seem to have these “big” announcements where they stuff the same spec into a new case or even change the colour of it and consider it a “new model”. ETAPrime reviewed the RK3566 and said it’s not a very powerful CPU, on par with an S905x3. I don’t see much of a point in considering this an upgrade over the RK3326 handhelds, as it still struggles with PSP emulation. Yes, it has an OLED, but… Read more »

But there’s always a worse product:

The reviews are not that great at all.

It seems that Anbernic might have rushed to market.

This is literally an offbrand PSVita, and not good and emulating what that could with 3-core A9…