Powkiddy A20 is a 3.5-inch portable Android game console based on the same Amlogic S905D3 processor found in Khadas VIM3L SBC, equipped with 2GB RAM, 8GB storage, and supported 18 different emulators for gaming. It could potentially also be an interesting platform to play with AOSP, as we’ll see below. 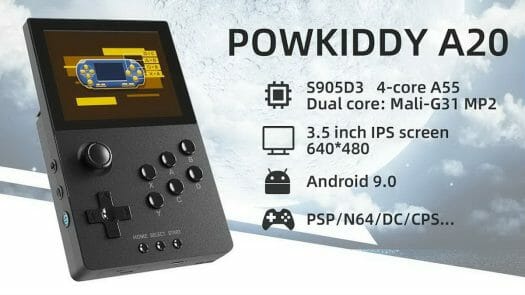 Preliminary specifications for Powkiddy A20:

Note that since Khadas VIM3L is officially supported in AOSP, Amlogic S905D3 platforms could be made to run the latest Android 11, or even the upcoming Android 12, but the company went with the Amlogic SDK, probably for better support and possibly Google services.

Powkiddy A20 is not available yet, but should eventually be offered on the official Aliexpress store.

I still do not understand why all of these devices are loaded with Android. If they are meant to play retroconsoles, Android is the worst choice. I don’t think it is so complicated to load Lakka or any other RetroArch distros for that purpose, knowing they are already well supported and hardware accelerated. I don’t think there is any legal issue involved, isn’t it?

Actually hardware acceleration often just works better on android than Linux for a lot of hardware. Shipping devices with a AOSP based android could be also (much) “safer” than shipping a full fledged retro system which often relies on binaries which can been seen as “abandonware” and easily lead to legal problems.

thou im unsure who this device is targeting. the design is weird;

rocker while the rest is design is only for up to genesis, (maybe PSP with a weird key bind, no shoulder button).

would retro gamer buy this? only curious people and collector buy this.
wont see majority of the retro community buying this

According me it has shoulder buttons, it’s why the device becomes thinner in the second half of the screen.

Android have better emulators, epsxe for psx and overall better n64 performance. I love linux retrogaming systems but they usually do not perform as great as the mupen64plus forks of android, probably bc the blobs work better on the android eco than on linux eco. Also epsx , much better than duckstation and psx reamed isnt available on linux, neither as a free closed source app.

With linux we fan do great things on a device like that so I hope we can boot it from sd.. mainline linux, panfrost powered.

Not agree. Regarding N64 emulation, Linux and Android are on par, and regarding PS1, Mednafen just leaps and bounds ahead ANY Android emulator. Same goes for Saturn, where beetle just obliterates the so much beloved Yabasanshiro on Android. Yeah, mednafen isn’t RetroArch, ok, but you have some Mednafen cores in it. Raw comparison Linux-Android, sorry, there isn’t even a competition as overall Linux is just aeons better. By the way, pcsx-reARMed is actually working in Linux, I use it in my i3 Intel NUC. It works slower than in native arm device? of course, but it works, and you won’t… Read more »

No, epsxe is way better emu than mednafen,there is no way to compare them on performance, scaling capabiltiies, 16 by 9 aspec ratio rendering, etc. its not comparable by any means. An n64 emu is widely known way better on android, but that is more debatable. There is always a fork of a fork. But if you get an n2, android will surpass linux by far on n64. same on every arm sbc. Even very low end chips can do n64 (a mali 400!!!!) Can do great on mupen64 bc of android and android mupen64plus forks.

But again, I prefer linux, but not bc of retroconsole performances bc I know android will surpass it by far.

You confused emulators…epsxe have nothing in common with psx rearmed.