5G is often associated with Gigabit speeds when found in mobile handsets or connected laptops, while there’s also 5G LPWA for battery-powered IoT devices. 5G RedCap, which stands for Reduced Capability, offers a middle ground for industrial IoT applications that keep some 5G features such as low latency, low power consumption, enhanced security, and network slicing while limiting the bandwidth to around 85 Mbps.

5G RedCap, also called NR Lite, will be part of 3GPP Release 17 scheduled for later in 2022, and further improved in Rel 18 in 2023. It will be first found in applications currently relying on LTE Cat 1 through Cat 4, and can be considered a light version of the 5G standard. An article on Telit says Rel 18 will specifically address the low-power wide-area network (LPWAN) segment currently carried seamlessly (e.g. no hardware changes required) in 5G by LTE-M and NB-IoT.

I found out about 5G RedCap in a recent article by Nir Shapira, a business development director in the CEVA mobile broadband business unit, as the company is developing the PentaG2 5G baseband platform IP for Mobile Broadband and IoT, and their PentaG2-Lite modem will support the new 5G Reduced Capability (shown as Reduced Capacity below) for applications such as wearables, surveillance, the Smart grid, and telematics.

The PengaG2-Max IP is designed for enhanced mobile broadband (eMBB), and both the Lite and Max may be used for low latency applications relying on 5G URLLC such as V2X, AR/VR headsets, and so on. So RedCap is simply a cost-saving exercise compared to 5G NR while benefiting from the 5G extra features compared to LTE Cat. 1.

We can see PentaG2-Max and PentaG2-Lite have similar block diagrams, but with the CEVA-XC DSP block and neural-network coprocessor completely gone from the Lite version, as well as one less CEVA-BX2 multipurpose hybrid DSP and controller, among other changes. 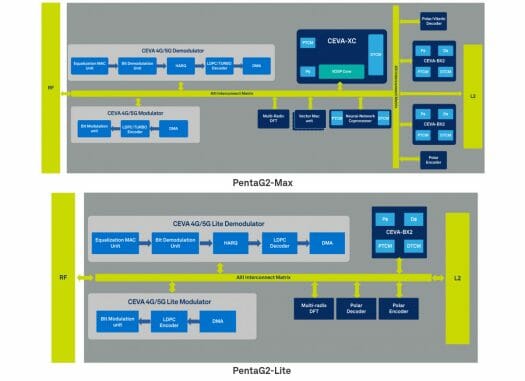 Since the 3GPP Release 17 standard is yet to be ratified it will take a while before 5G RedCap modules become available, and CEVA expects those to start selling in late 2023 or 2024.

3G is already gone in most countries. 2G is still widely available, because there are still lots of devices (M2M/IoT) which only support 2G, and where 3G offered no benefit (low throughput requirement) and had some downsides (higher complexity, worse coverage due to 2.1Ghz only). Even with 4G, a lot of stuff required for M2M was added only later, so its not so widely available. But 4G will stay for many years, too many devices in the non-M2M market, and 5G only offers benefits for some use cases. 4G already has fairly high throughput and good coverage. And – 4G… Read more »

Im living in a country where 2G largely has gone, 3G refarmed to 900MHz and all other bands are full of 4G with spectrum sharing with 5G *urks*