GEEKOM MiniAir 11 is a mini PC powered by a Celeron N5095 Jasper Lake mini PC that ships with 8GB RAM and a 256GB SSD selling for $199, and placing itself as a competitor of Beelink U59 mini PC.

The mini PC offers HDMI 2.0 and mini DisplayPort video outputs, Gigabit Ethernet, WiFi 5 and Bluetooth 4.0 connectivity, three USB 3.2 ports, and two USB-C ports for data only, as the device is powered by a 19V power adapter, and the USB-C ports do not support DisplayPort Alt Mode. 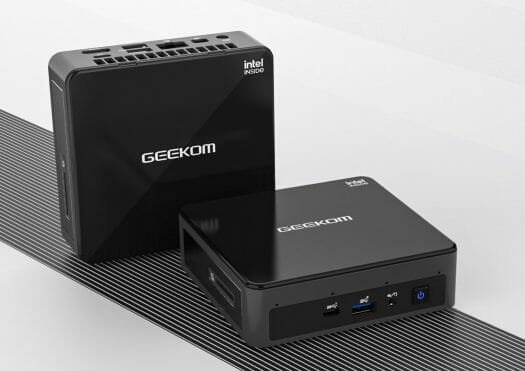 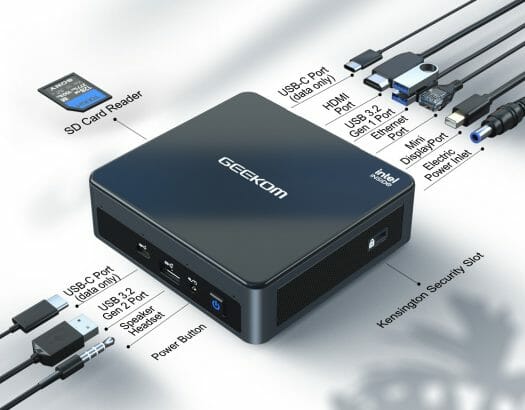 The mini PC is sold with Windows 11 Pro pre-loaded and ships with a power adapter for your region (US, EU, UK), a VESA mount, a storage bag, an HDMI cable, a mini DP to HDMI adapter, a user guide, and a “Thank You” card which clearly makes a huge difference.

GEEKOM comparison against Beelink U59 highlights the use of a “metal inner frame” instead of a plastic frame, the presence of an IR receiver and while both PCs support dual independent 4K display setup, the MiniAir 11 does so through HDMI and miniDP ports, instead of two HDMI 2.0 ports. Note the specs list an HDMI 1.4 port, but it could be a mistake, and it should really be HDMI 2.0. There’s no support for a 2.5-inch SATA drive like in Beelink U59, and the USB port configurations are different. 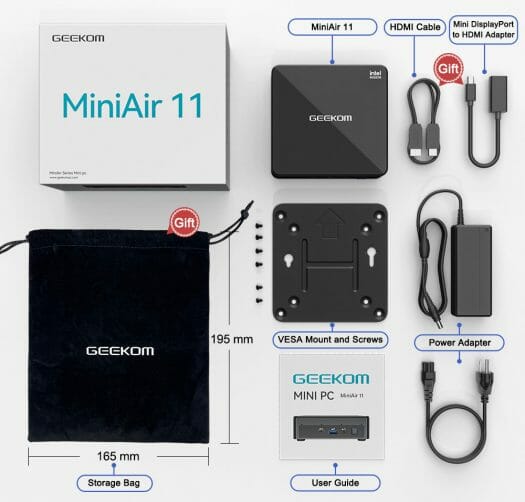 I had never heard about GEEKOM – pronounced GEEK-KOM – and they are selling on their own website that does not have any physical address, and only provides a contact form and US phone number. We received an email from their geekom.tw email address with a signature reading in part “GEEKOM was founded in Taiwan in 2003”, despite both domains being registered in 2021 only.

If you are interested, you can purchase the GEEKOM MiniAir 11 mini PC on Geekompc.com for $199 for the next couple of days (until June 15), after which the price should be $279. Note there’s no escrow like in Aliexpress, so if you’re purchasing from this website, and something goes wrong, there may be no recourse. The two user reviews on the website appear suspicious/unnatural, but they are not the only ones doing that. [Update: as noted in the comments section, they have been selling mini PCs on Amazon for a few quarters already, so they may be legit]

I filled out a valid Netherlands, EU address, and got “There are no shipping options available. Please ensure that your address has been entered correctly, or contact us if you need any help.”

Website says $209. And I guess that’s without shipping, and without EU VAT, and thus without “VAT handling service charge” by the courier.
If they would sell via Ali, those things would have been taken care of.

I can see they’ve increased the price to $209 shortly after I published the post.

FWIW, they have been selling on Amazon US for more than a few quarters now. They also had a decently reputable US PR agency that used to pitch their products for review (I think they have shifted to in-house now).

If CNX allows look on Aliexpress