When we first wrote about Fingerbot Bluetooth mechanical button pusher to add automation control to (dumb) home appliances over two years ago, I was not convinced about the solution. But it must have gained enough traction, as Adaprox has now launched a sensor version – the Fingerbot Sense – with either Zigbee or Bluetooth connectivity, plus a new touchless control function.

It works just the same way as before, simply place the Fingerbot Sense on top of a physical button, and control it with your smartphone, a voice assistant like Amazon Alexa or Google Home, or with the new touchless control, simply wave your hand in front of the button without having to touch it. 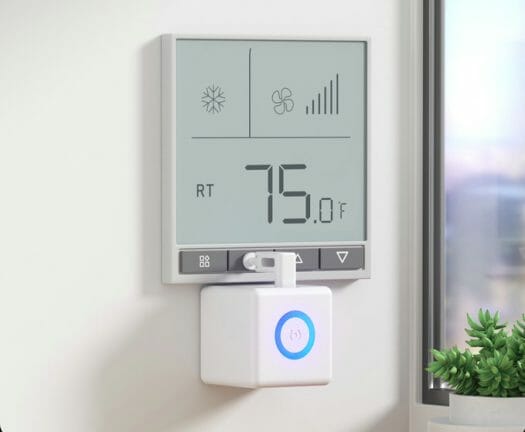 There’s also an optional 2-button Zigbee remote control for people wanting to remotely control the FingerBots without a smartphone or voice control.

The Bluetooth version can directly work with your smartphone, but some features and the range will be limited, so for most people, it might be better to also get a HomeHub for control over the Internet. The Zigbee version also seems to be preferable with much lower latency (100ms vs up to 5s for Bluetooth!), and the ability to control a group of Zigbee devices in one go. 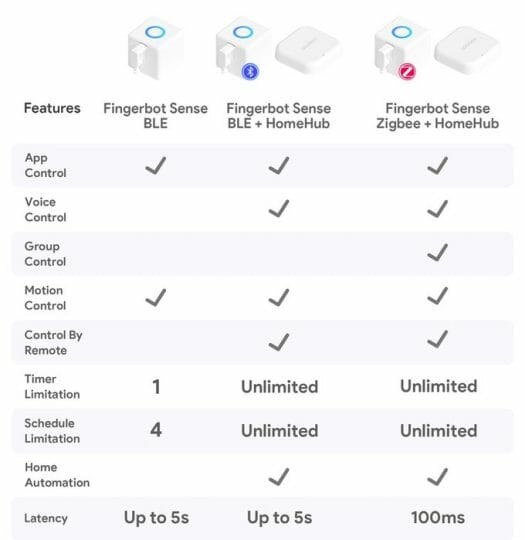 You need to install the MeshHub app for Android or iOS on your smartphone to configure the buttons and hub(s), and from there, you can control pretty much anything with a button thanks to multiple arm shapes including coffee machines, air conditioners, elevators, garage door, and so on. It’s also possible to set schedules and configure the buttons to work with Alexa, Siri, or Google Home. There’s no documentation for the Sense button pusher yet, but you’ll find getting started guides for the original FingeBot and HomeHub on the Adaprox website. 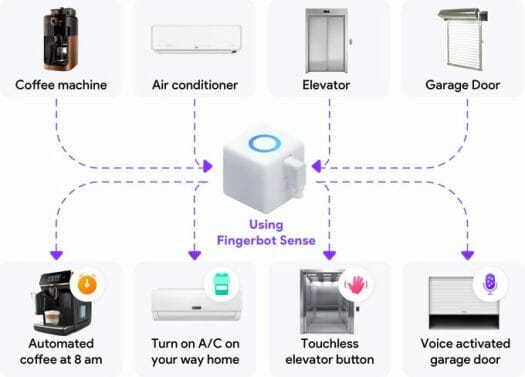 Adaprox has launched the FingerBot Sense on Kickstarter with a $10,000 funding goal that has already been surpassed.  Rewards start at $25 for a single FingerBot Sense device, but most people will probably prefer going for a bundle such as the $89 “Share Bundle” with two Fingerbot Sense, two toolpacks, and a HomeHub, or the $249 “Family Bundle” with eight Fingerbot Sense, four toolpacks, and a HomeHub. Shipping is expected to add $10 to $20 depending on the destination country. Rewards are scheduled to ship by December 2022, but remember that delays are not unusual for crowdfunded projects, so they might also ship in Q1 2023.