At the beginning of the year, we wrote about WCH CH32V307 RISC-V microcontroller and a development board with 8 UART ports controlled over Ethernet. I’ve now been informed of a similar, but much more compact by VCC-GND Studio named “YD-CH32V307VCT6”.

Besides the 144 MHz RISC-V microcontroller, the board features a 10Mbps Ethernet port, two USB Type-C ports, SPI flash, EEPROM, a microSD card socket, and four rows of 24 pins each for a total of 96 pins exposing all pins out of the LQFP100 package. 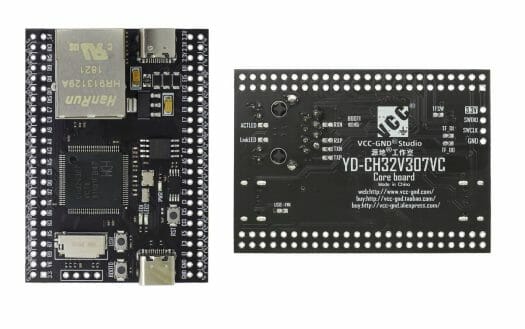 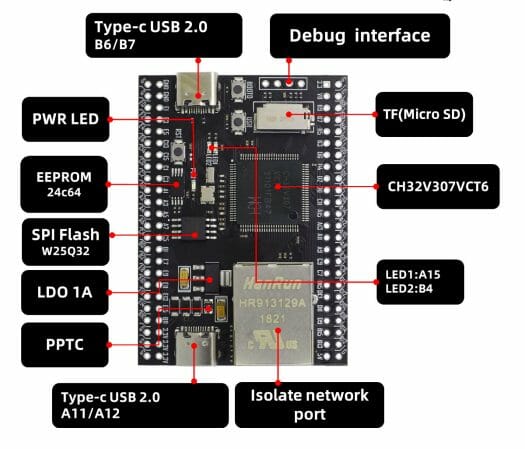 Either USB port can be used to flash the firmware with WCHISPTool (Windows only) and programming can be done in MounRiver Studio IDE that is said to be similar to the Arm Keil MDK, and available for both Windows and Linux, which is said to include a download tool too (So WCHISPTool may not be necessary?). You’ll also find the CH32V307VCT6 datasheet and reference manual, as well as code samples on Github. That repository is for the WCH board, but it should also work on the VCC-GND Studio board with minimal modifications (or none at all). 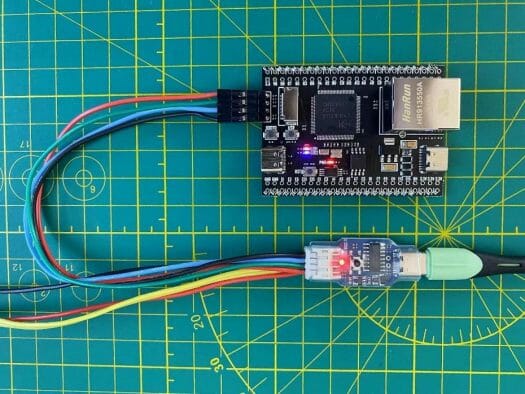 You may also want to get the YD-Link debugger, shown above connected to YD-CH32V307VCT6 board, for easier debugging. VCC-GND Studio also stores some documentation about the board and debugger, but only/mostly in Chinese.

The YD-CH32V307VCT6 board can be purchased on Aliexpress for $9.50 plus shipping, but there’s also a $12 “Board Dugger” option that I would assume include the RISC-V Ethernet I/O board and the YD-Link debugger, but it’s not explicitly stated.

While the documentation seems all over the place, there’s been what I would call a “positive vibe” about WCH since the end of last year. This started with the company opening the openwch Github account containing resources for their microcontrollers and other chips, then I noticed Patrick Yang, the Technical Director at WCH, getting involved and responsive and Twitter, and I’ve been reading some positive feedback including recently from Olimex:

Just want to share that @WCH_TECH @Patrick_RISCV provide incredible support for their customers! We reported bug in CH9344L Linux driver and it was fixed just in few days. You guys are amazing! There will be lot of Olimex boards with your ICs in the future.

If only they would get a support forum or mailing list it would even help more people, as Twitter is not exactly the best solution to keep a history of common problems, or report bugs.

Why? PoE would be logical, in’it?

Moneys. Proper PoE is not cheap.

CC1 and CC2 each have their own 5.1K to ground, so their upstream facing port can use the 3A from the USB-C, though it seems unlikely they request that much. It’s a development board. I’d reason the percentage of people attaching it to a computer for development should be way higher doing ethernet dev that have POE for a 10Mbps link. For debugging convenience, I think ESP32-C3 is still a winner by providing power, serial console, AND JTAG all on the same USB cable, but man does this device have a ton of I/O pins. Nice to have choices, but… Read more »

Do modern switches/routers still support 10Mbit?, or do we need to go digging in the attic to get this connected?

Seems like yd-link is just shallow copy of st-link without any docs and Linux support. MCU has no openocd support and no JTAG. Closed thing