While we like open-source tools such as KiCAD, Altium has added a pretty cool feature to the Altium Designer program with a 3D layout tool, which as its name implies, allows the design of 3D PCBs…

The new 3D layout tool relies on 3D-MID technology that combines electrical circuits with three-dimensional mechanical parts. I’m not sure who really needs this, but I have to admit the results look pretty neat. 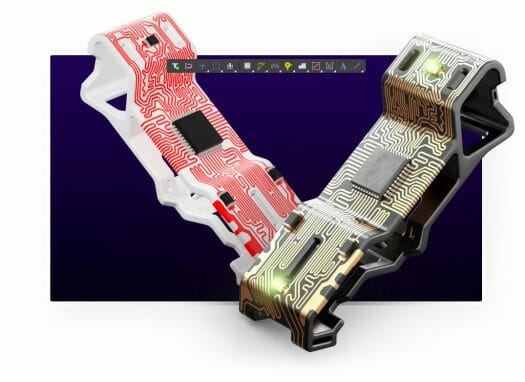 Altium explains the design process is quite similar to standard 2D PCBs, and designers would create a layout on the surface of a 3D substrate using the standard library components and with the connectivity driven by the schematic design in the same way as with a standard PCB. You can check out how it works in a video shared on Altium’s LinkedIn account.

The designer would then export the files in the format required by LPKF Laser & Electronics AG’s laser direct structuring process for 3D-MID parts. You’d also need to find a PCB manufacturer that can handle this specialized process. One of those is HARTING as explained by Thomas Hess, Head Of Product Development & Technology Roadmap, on LinkedIn:

We at HARTING are specialized in the manufacturing [of] 3D-Circuits. The 3D layout software from Altium was developed together with us and we can directly load the exported data from Altium Designer on our production machines. Please contact us, when you have a concrete RFQ.

Altium also lists other companies that should be able to handle 3D PCB manufacturing, including TEPROSA GmbH, S2P – Smart Plastic Products, and Beta LAYOUT GmbH, but I’m sure more are coming if this type of 3D PCB becomes somewhat popular.

More details about 3D-MID technology can be found on the 3d-circuits.com website. Altium 3D layout tool is only available in the Beta version of Altium Designer at this time, but you can try it by login into your Altium account, or contacting Jack Henriques from Altium (see LinkedIn link above).