HopeRun’s HiHope development board features a HiSilicon Hi3861V100 32-bit RISC-V microcontroller compatible with OpenHarmony OS and looks very much like the BBC Micro:bit educational board notably with its edge connector.

The board is also designed for youth education (in China) and comes with similar sensors, but there are some differences such as a 0.96-inch OLED instead of an LED matrix and support for offline voice recognition. There’s no wireless connectivity apart from NFC support. 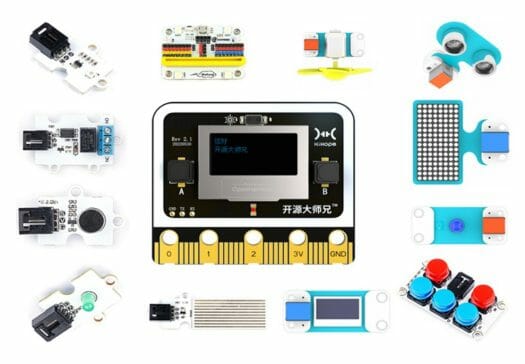 The certified OpenHarmony 3.1 development board is programmable with PZStudio open-source graphics programming environment, and just like the BBC Micro:bit works with various modules such as LEDs, buttons, sensors, displays, etc.., and even complete robotic kits. The board is apparently used in the “new curriculum standard” from the ministry of education in China to teach STEM to pupils, and is called/nicknamed “大师兄板” which interestingly translates into “Big brother board”.

While the HiHope big brother board is designed for the Chinese education market, Smartfly decided to sell it on Aliexpress for $42 including shipping (to the US), but good luck finding the modules or kits outside of China.

Would this microcontroller ever be widely available in the west?