There are plenty of carrier boards for Raspberry Pi CM4, but the Ochin looks a bit different, as it is specifically designed for drones and robots, and the compact carrier board exposes most interfaces through low-profile GHS connectors instead of standard ports or headers.

About the size of the Raspberry Pi CM4 itself, the board also comes with a USB Type-C port to flash the eMMC flash, two MIPI CSI connectors and four USB 2.0 GHS connectors to add cameras to your robotics projects, and supports LiPo batteries. 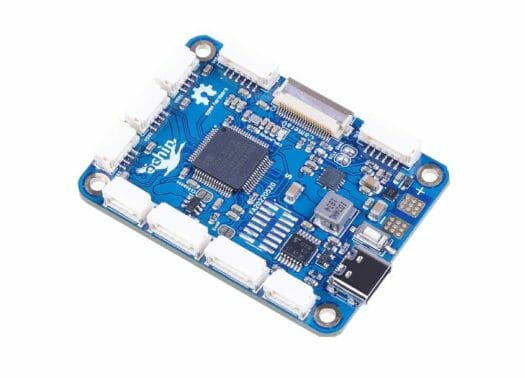 Also known as the “Öchìn CM4”,  the carrier board is partially open-source with the KiCad PDF schematics and 3D models for accessories such as camera mounts and an extractor for the CM4 module available on Github, along with documentation.

The board was designed to run OpenHD open-source software for FPV drones, and a Raspberry Pi CM4 module with 1GB RAM, 16GB eMMC flash, and of course a wireless module for WiFI 5 should be enough for this application. Note that a heatsink to cool the Raspberry Pi CM4 module is recommended. This solution should offer a nice performance upgrade compared to the “Raspberry Pi 3 mini” board the OpenHD community hacked previously, and the board also adds support for up to six cameras.

The Ochin CM4 board is available now and can be purchased for $59.99 on Seeed Studio with free shipping (time limited promotion).

By “GHS connector”, Seeed/Ochin seem to be referring to the surface mount version of the GH connector series: https://www.digikey.com/en/products/detail/jst-sales-america-inc/BM04B-GHS-TBT-LF-SN-N/807802

Would be nice to have another SPI chip select or another connector for a second SPI. I’m using a FPGA to offload I/O processing.