Equipped with 2MB flash and 384KB SRAM, the board targets smart home applications, and ships with a baseboard to help with development. 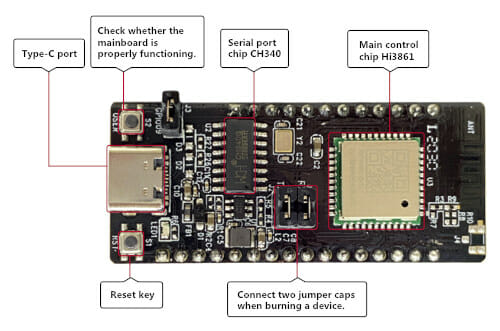 HiSpark board appears to be an official development platform for Huawei OpenHarmonyOS since there’s a dedicated device page on HarmonyOS website.

The specifications do not mention the type of microcontroller core used in Hi3861, but the software development workflow shows a Windows workstation to edit the code and Linux server which relies on a GCC RISCV-32 toolchain to build the code. So it must be a 32-bit RISC-V core despite some other websites mentioning a Cortex-M4 core. If you don’t plan on modifying the firmware, you can also program the board with Python. 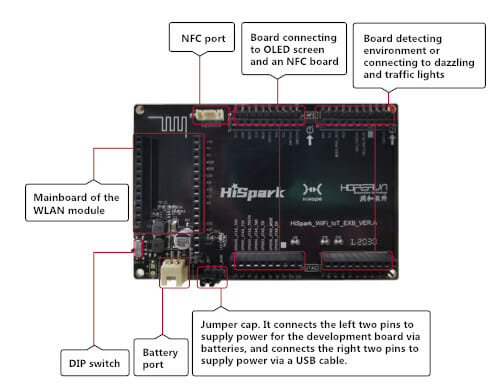 As noted in the introduction, HiHope also provides a baseboard for HiSpark board with an NFC port, what looks like Arduino compatible headers, a battery header, a jumper to select USB or battery power, and an on/off switch.

Besides the device page on the HarmonyOS website, you’ll find code samples on Gitee, and a subforum on Elefans where developers share their experience (Chinese language only). 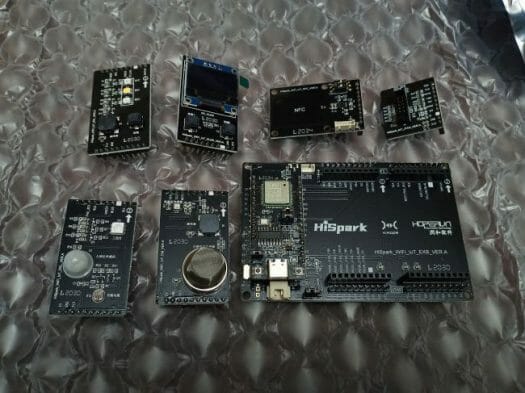 I could also find an unboxing box on Elefans, where somebody purchased a complete kit with HiSpark board, the baseboard and various modules include an OLED display, NFC, PIR, etc…

How does this compete with the ESP32, beside the LiteOS and HarmonyOS?

However, I think to build it you’ll require bits from the rest of openharmony.

Browsing around, the device is certain to be 32-bit RISC-V based, which is a plus for everybody wanting to abandon proprietary arches like ESP32’s Tensilica and ARM used by others.

Hi, how to flash the bin files to Hi3865 wlan board? i manage to build the source in Linux host machine and build was success and i can see the binary files are generated. Is there any HiTool available for this flash ?