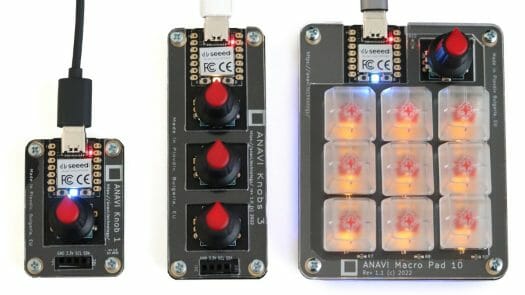 The Knobs 3 and Knob 1 also rely on the Xiao RP2040 module, but do not include keys at all, instead featuring three and one clickable rotary encoders respectively, as well as an I2C header to add an optional OLED display or other I2C peripherals. All three input devices run the KMK firmware compatible with Windows, macOS, and Linux operating systems.

The solutions are open-source hardware, and besides the open-source KMK firmware, KiCad hardware design files are also provided on GitHub.

All three input devices are available on Crowd Supply crowdfunding platform with the ANAVI Marco Pad 10 going for $45, the Knobs 3 for $32, and the Knob 1 for $29. Shipping is free to the US and adds $12 to the rest of the world. Backers should expect their rewards to ship around mid-January 2023.

I’m confused. The kicad files on github are for an older version. Lacking at least the rgb leds on the back and the weird power pads in the back/center. The video mentions a ‘front RGB’, but i can’t see it in the video, nor in the kicad project.

Isn’t the “front RGB LED” the one on the MCU module itself ? That’s what it seems to me.

Yes, Willy is correct one of the RGB LEDs is part of the XIAO RP2040 module. The KiCad project in the GitHub is up to date. The other 4 are on the back. They are applied as 5V WS2812B LED strips and there are dedicated pads on the back of Macro Pad 10 during the assembly. There are also 9 yellow LEDs on the front and hot-swap sockets. So at the end of the day, from the perspective of the backers, all kits don’t require any soldering.

I know they are on the back. Incidentally, that’s why i said “Lacking at least the rgb leds on the back”.
If i clone the repository and open the kicad files i see this and this. The last changes (as reported by github) are from july 22nd. You sure the github is updated ?
May i recommend that you ignore some more files ? You committed several “*-bak”. I think the fp-info-cache(3MB!) and anavi-macro-pad-10-cache.lib aren’t meant to be in source control either.

The GitHub repository is up to date and contributions as GitHub pull requests are always welcome, especially now during hacktoberfrest. As an entirely open source project the development is transparent and you can see the changes in the git history. It takes some time to organize a crowdfunding campaign. So it took several months between the git commit for rev 1.1 and the launch in Crowd Supply. In future I’ll update the .gitignore to skip some redundant files as you recommended.

By the way, unless I missed it, the link to the schematics is not available on the Crowd Supply page. So I had to search for it to find it.

Thanks for the note. I’ve ask Crowd Supply to update the web page and soon the link should be available there too.

You haven’t looked at the image.

Hey, @Orzel, I think I figured it out – Leon mentions the backside lights are “LED strips”, so probably these are simply ready-made modules/strips that are connected to the +5V male headers.

Ah!? In the embedded video, it really seems to be part of the (main) PCB. But you might be right. That would explain the j1/j2/j3/j4 connectors. I can’t see any reason to use such a convoluted way of adding the back rgb… (?!)

@S K, yes, exactly! There are pads on the back which can be clearly seen in KiCad’s PCB Editor. During the assembly process WS2812B 5V LEDs strips are placed on these pads. The reasons for using LED strips is straight-forward: we have them in stock because the same type of LEDs are used for Miracle Controller kits and Macro Pad 8. However, all these things are details related to the manufacturing so please keep in mind that at the end of the day the backers from the crowdfunding campaign will receive Macro Pad 10 as a kit that doesn’t require… Read more »

Yes, QMK support for ANAVI Macro Pad 10, Knob 1 and Knobs 3 is coming soon. I have opened GitHub pull requests. A QMK demo with a mini OLED has been shared in Twitter: https://twitter.com/AnaviTechnology/status/1579128852886224900