We’ve already reviewed Khadas Edge2 Pro with Ubuntu 22.04, and I’ve now had time to test the ultra-thin Rockchip RK3588S SBC with Android 12, so I’ll report my experience checking out the features, running some benchmarks, playing videos and games, etc…

Flashing Android 12 to Khadas Edge2 board 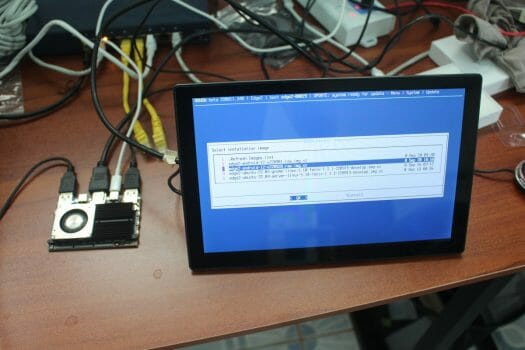 We can see the Android 11 image from the list we saw last month is gone for good, and a new Android 12 image dated September 20, 2022 is available. I selected that one, and OOWOW downloaded the files and flashed it to the board. Within five minutes, Android 12 was up and running on the board. 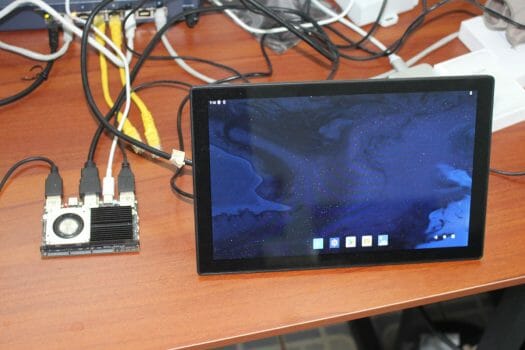 As somebody who had spent several hours trying to flash firmware from Windows tools in the past, I really appreciate tools such as OOWOW that make installing and switching between operating systems a breeze.

The first thing I did was to connect to my WiFi 6 router (Xiaomi Mi AX6000) since Khadas Edge2 SBC does not come with an Ethernet port. 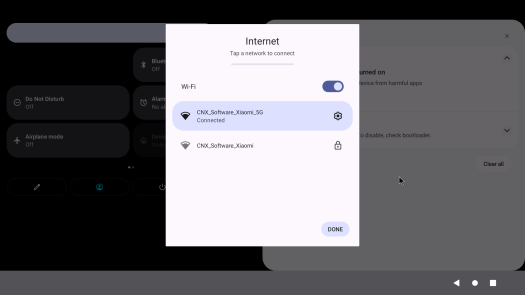 No issues there. The Settings look pretty standard except for the Khadas settings section. 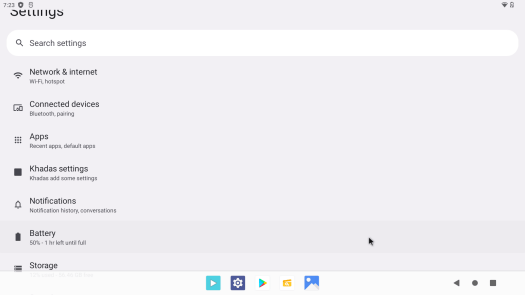 It can be used to control LEDs, the cooling fan, and on/off timers. 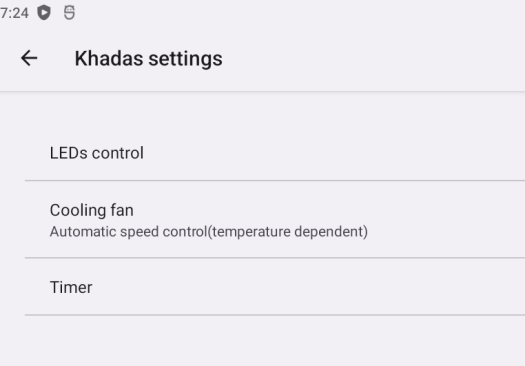 Each LED is set to off by default, but the user can change that to Always on, Breath mode, and Heartbeast mode. I tried it will all three LEDs, and it worked fine. 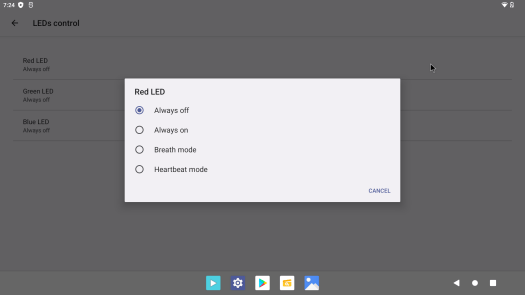 The second setting may be more important, as while the fan is set to be controlled automatically, we can also turn it off, or make it run all the time at different speeds. We’ll try that in the benchmarks section. 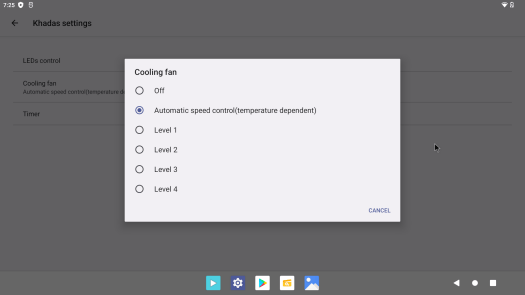 The board ships with an RTC and battery, which makes it possible to turn on and off the board at specific times of the day 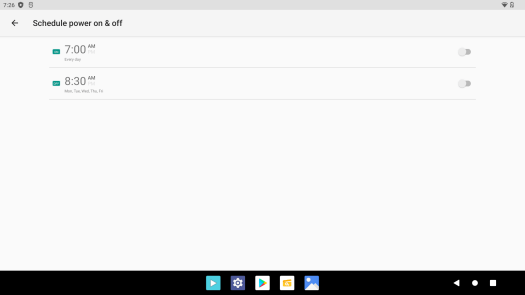 It can be especially useful to save electricity. For example, I worked on a digital signage player in the past with this feature in order to turn the device on during work hours only, and turn it off at night together with devices attached to it such as the display(s).

The Android 12 image comes with Google Play, so I logged in, and most of the applications can be installed, but not all for some reason. 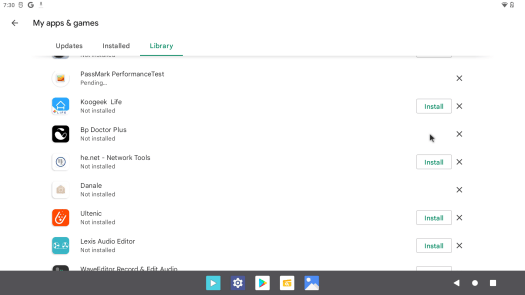 I also received an email from Google telling me: “We noticed a new sign-in to your Google Account on a OnePlus 6 device.”. Khadas Edge2 shows itself as a OnePlus 6 smartphone, I’d assume for better compatibility with the store.

I’ve used CPU-Z to check some of the system information. 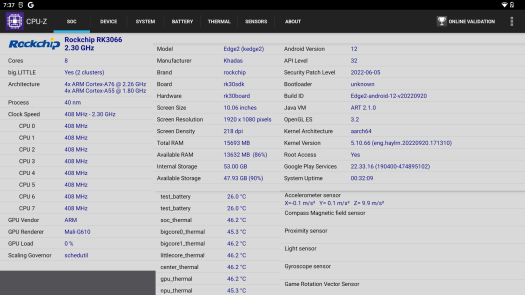 The user interface resolution is set to 1920 x 1080 pixels in this Android 12 image, but Khadas says it’s possible to modify the image to get a 4K resolution user interface, and it should be because the resolution was set to 3840x2160in the Mekotronics image. The memory capacity is shown to be 15,963MB (or about 16GB) and storage 53 GB out of the 64GB eMMC flash. The only sensor on the board, an accelerometer, is properly detected. At idle, the temperature is about 46°C. 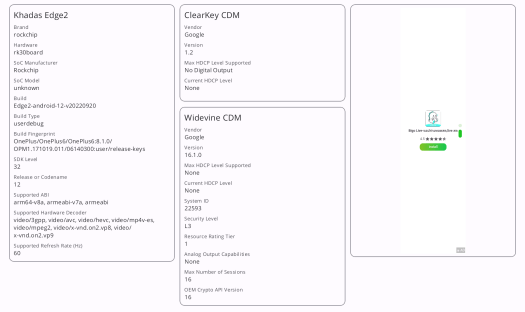 Since the Khadas Edge2 is a development board, we should not expect Level 1 Widevine DRM, but DRM Info still reports Level 3 is supported together with Clearkey CDM 1.2.

Let’s install some benchmarks, to check out the performance in normal.

I did have some warnings show up during the installation of Work 3.0 in PCMark 10

But it did not seem to affect the benchmark. I first run PCMark 10 Work 3.0 performance benchmark with the fan control set to automatic. 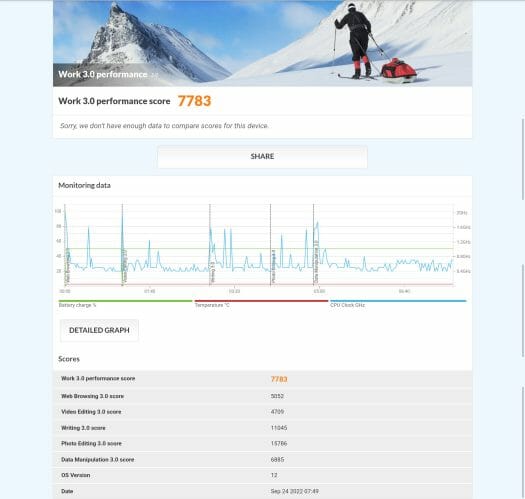 And repeated the test with the fan turned off in a room with an ambient temperature of about 28°C. 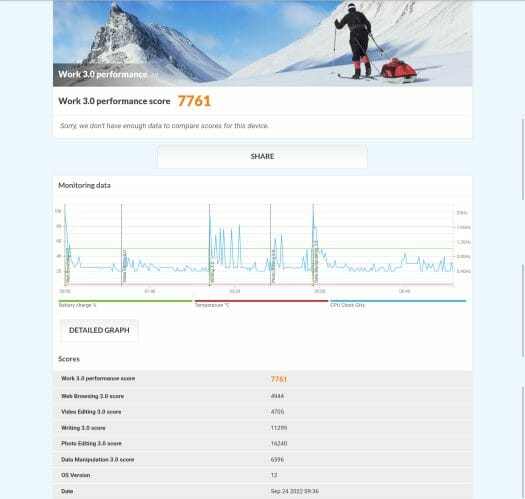 At 7,761 points, the second score is lower but not that much compared to the 7,783 points we got with the fan, so I’d assume under most circumstances you could turn on the fan completely, and the system would run fairly well. Note that the Mekotronics R58 got 8,045 points in the same benchmark and the details of the scores are all over the place.

GeekBench 5 results can be found online. 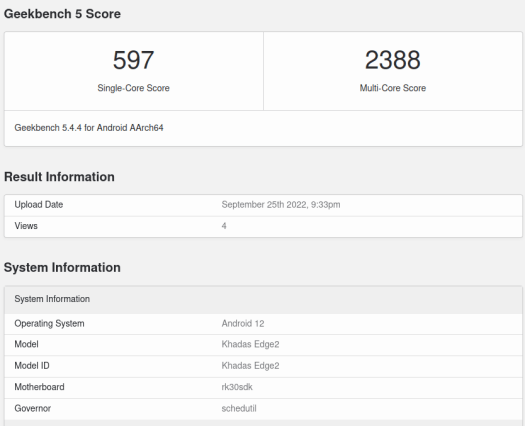 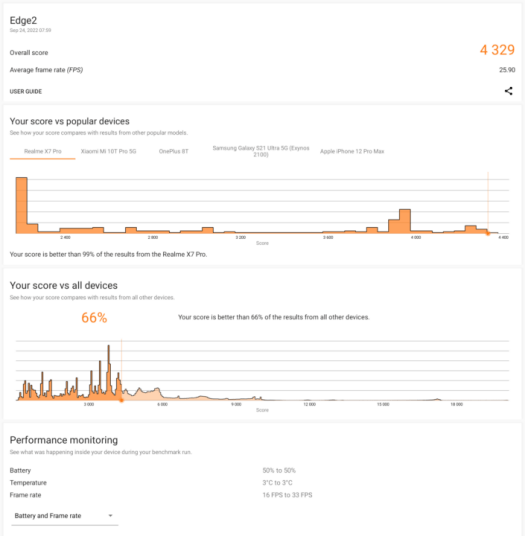 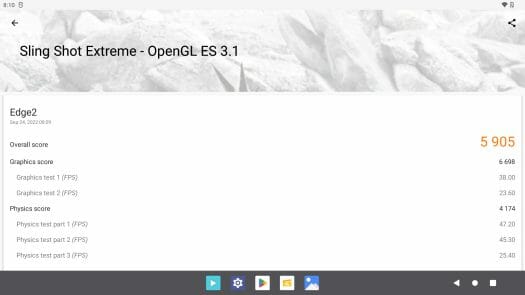 4,329 and 5,905 points are quite higher than the 4,014 and 5,396 points we got with the Mekotronics R58 but the resolution (Full HD vs 4K) may have had an impact, although I saw 3Dmark benchmarks were run at a fixed resolution, or the GPU driver has improved a lot.

PassMark PerformanceTest adds to the confusion… 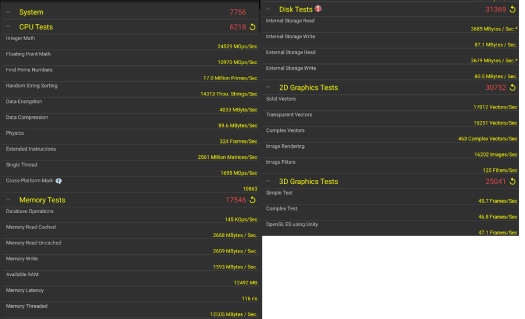 We should probably ignore those graphics benchmark results, as they don’t seem right, and contradict 3DMark results. It’s really unclear what happened here, and I could reproduce the 2D and 3D results on Khadas Edge2 several times. Another interesting point is that the Raspberry Pi 4 is starting to feel like a low-end SBC. Competing devices are not at the same price point though, so Raspberry Pi may not rush to release a Raspberry Pi 5 just yet… 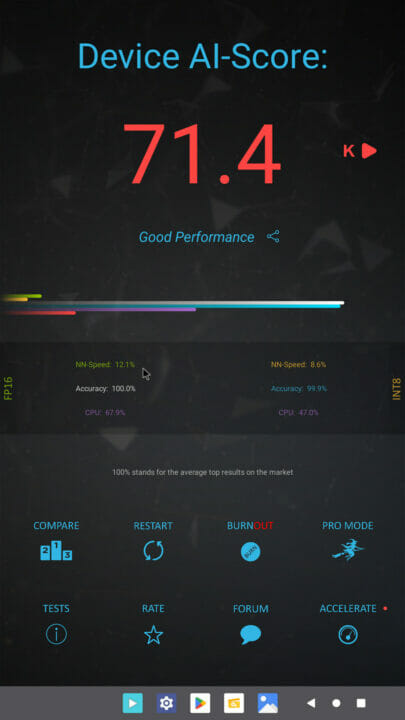 I ran AI Benchmark app as well, and the results are similar, so I believe the NPU is not used at all (TBC). 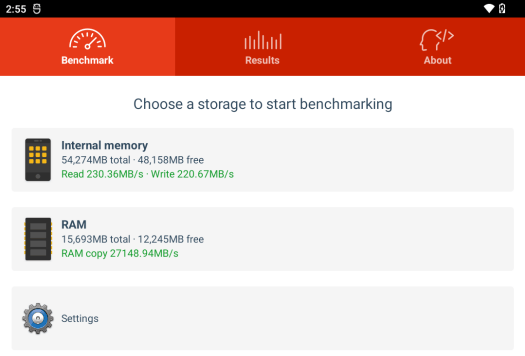 We’ve previously seen that hardware video decoding is not working in Ubuntu 22.04 just yet, although the processor is fast enough for smooth 4Kp30 software video decoding. But in Android 12 should be much better as we’ve seen in Mekotronics R58 review.

The only problem is that the included app comes with a poor user interface that makes selecting a file difficult since it will show all files, instead of allowing folder navigation. 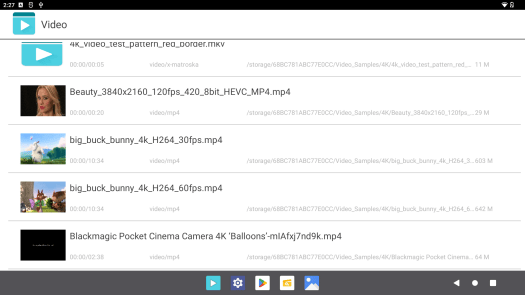 Instead of using the built-in software, I first tried Kodi 19 from the Google Play Store, but I noticed the 4K AV1 video was played with the libdav1d library and was not smooth at all. So I installed Kodi 20 Alpha 3 pre-release, which was still using software decoding (libdav1d) but the 4K AV1 video was smooth due to improvement to the library.

Other 4K videos tested in Kodi 20 Alpha 3 all with hardware video decoding unless otherwise stated:

Video playback in Kodi was better than I expected considering Rockchip RK3588(S) processor is relatively new. The only failures were for a 10-bit H.264 video using software video decoding, and “The Curvature of Earth ” 4Kp60 VP9 video that can’t play properly with hardware video decoding.

I also install the YouTube app and could play several videos without issues.

While it’s certainly not its main use case, Khadas Edge2’s RK3588S SoC integrates a powerful GPU that’s suitable for gaming, so I’ve tried a few games for fun.

All games that could play were very smooth close to 60 fps. You can check the video below where I showcase them for a minute or so each.

Some power consumption numbers with a USB keyboard, a mouse, an HDMI monitor, and a WiFi 6 connection:

The power off and idle power consumption is about the same as in Ubuntu 22.04, but playing a 4K YouTube video in Android is much more efficient thanks to hardware video decoding while doing the same with Firefox on Ubuntu  22.04 consumes 7.5 to 10.9 Watts due to software video decoding, and possibly the overhead from using a web browser.

The Khadas Edge2 Pro SBC works reliably and offers excellent performance on Android 12, except for the PassMark 3D graphics benchmark score that’s low for some unknown reasons, and contradicts 3Dmarks results and my experience while gaming. I also wish they have integrated a better video player into the Android 12 image, but that probably does not matter that much since in most cases, people would run custom apps on this type of hardware.

While I am happy to see this device has wifi 6: I am having a hard time understanding how it is con figured. We know Bluetooth requires a 2.4 ghz antenna and the minimum 2×2 mimo would require two 5 ghz antennas. But there are only two antennas ?
Since most all WiFi 6 chips are more than capable of this, it would be a huge fumble at the goal line not to supply enough antenna I/O’s
What WiFi 6 spec does this meet ?

2T2R can work with only two antennas.
2.4GHz WiFi and Bluetooth share the same antenna.