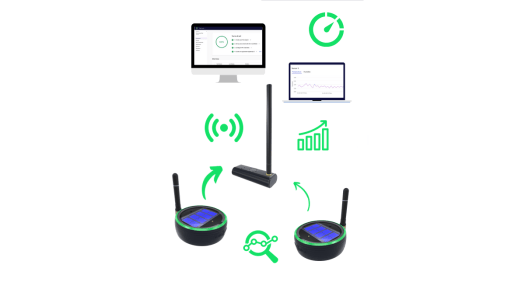 Everactive has launched a batteryless IoT devkit to let engineers evaluate its ultra-low-power energy harvesting solution and the Evernet wireless protocol for the “Hyperscale” Internet of Things.

The kit is comprised of two environment sensors (ENV+ Eversensor) with a low-light photovoltaic harvester, one USB Evergateway, and an unlimited number of accounts to the Everactive developer console for data visualization.

The ENV+ Eversensor features temperature, humidity, and pressure sensors, as well as a 3-axis accelerometer, supports the Evernet IoT protocol, and instead of using a battery for power, the device relies on a photovoltaic cell that provides enough energy for continuous data streaming to the USB gateway at a rate of once every 15 seconds.

The public details about the development kit are rather light, but developers will have access to a developer console for data visualization, the ability to sandbox data & add virtual sensors, as well as access to an API, webhooks, and MQTT data integration.

Everactive claims its ultra-low-power (ULP) receiver delivers a 1,000x reduction in power consumption compared to some of the best COTS receivers available to date. The ULP receiver is said to consume only 200 nanowatts when active, while Bluetooth or Zigbee receivers typically consume significantly more.

It appears the low power is achieved with one radio handling network synchronization, coupled with an off-chip sub-GHz radio to transmit bidirectional data using a protocol based on 802.15.4. Most LPWAN standards require the chip to be in sleep mode most of the time, wake up regularly, and transmit data if needed, while the Everactive chip can stay awake at all times to perform time synchronization.

The Evernet Sub-GHz network offers a range of up to 800 feet (around 250 meters), supports several thousand nodes per gateway, and can achieve up to 0.25 Mbps data rate per node. The company also highlights the need to move to batteryless solutions for large scale IoT networks, as otherwise trillions of wireless sensors would need trillions of batteries, and millions of battery replacements each day.

The batteryless IoT devkit is available for pre-order now for $599 with BATTERYLESS20 coupon and is expected to ship next month (November 2022). The press release may have a few more details.

The protocol or PHY has nothing to do with wether nodes are use batteries or not. Zigbee or Matter nodes also work perfectly fine – there are even SOCs that have internal power management for PV panels. Not sure why this is a new product at all. Just use Matter over sub-gig band and be done with it.

It’s not that easy really. When the power from the panel is not sufficient to supply the sub-gig radio (10s of mW) things become very hairy on battery-free devices. You can absolutely not run standard Zigbee in such a network. What everactive does is lowering the power consumption of the radio to 10s of uW that can actually be provided by a small solar panel.

It’s over, you are too late.

What do you mean by that? Too late to compete with existing standards?