The fourth prize of Giveaway Week 2022 is the Sonoff NSPanel Pro control panel with four Zigbee modules including a temperature & humidity sensor, a door/window sensor, a switch, and a PIR motion sensor.

The controller is based on a Rockchip PX30 quad-core Cortex-A35 processor running Android 8.1 and acts as a Zigbee 3.0 gateway allowing users to add all sorts of Zigbee modules. It also works with the eWelink app to add security cameras which can be some of your old smartphones. 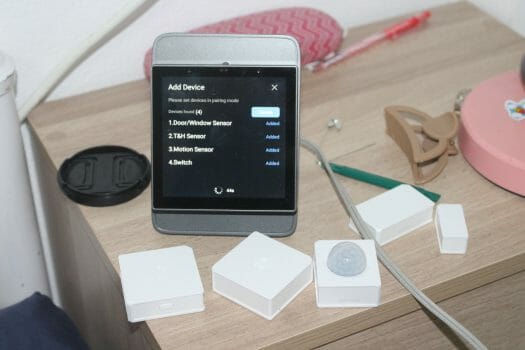 We reviewed the SONOFF NSPanel Pro control panel & Zigbee gateway last month together with Zigbee modules and the SONOFF Slim Cam indoor security camera and found it worked reasonably well, although some advanced features required us to use the eWelink app in our phones instead of the touchscreen on the display. We also found one bug with the Zigbee switch that the company promised to fix in the next firmware update, but overall our experience was a positive one. 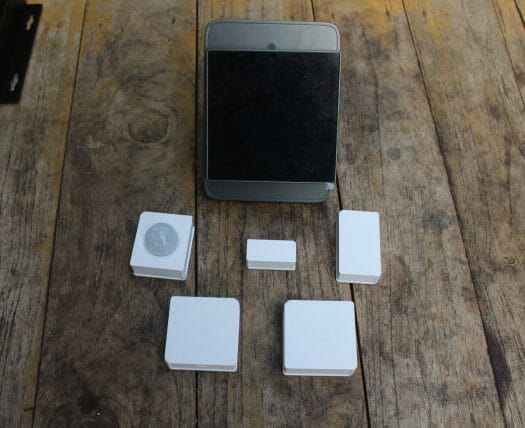 The giveaway includes the SONOFF NSPanel Pro together with the four Zigbee modules, but not the camera since we may not have access to it at the time of shipping. We’ve also removed the coin-cell batteries to prevent any issues with customs.

The kit offered here is sold for $132.42 on the ITEAD shop, and you can also get a 10% discount with coupon CNXSOFTSONOFF on most products from their store.

I could use this. United States.

Malaysia. I use sonoff

Would love to get this! South Africa

Hello from the UK

Greetings from the Netherlands

Greetings from the Netherlands

Neat! Thank you from Brazil 🙂

Good Morning from Germany. Thank you for the amazing giveaways

The Netherlands here. Looks like a worldwide contest, nice!

Hi there from Italy!

hello everyone from France

Moin Moin from Germany 🙋
As home automation is within the top ten of my todo list for the next year, this would be a perfect start!

Hungary. Keep up the good work!

This would be cool to have in Sweden!

Greetings from Spain and congrats for all the good work!

Hello from The Netherlands!

France
Those NSPanels look fun, and a full android instead of itead displays make them more versatile

Good luck everybody from France!

Thank you from Italy

Now these should definetly learn some German.
Preferably in Germany!

Netherlands, This would be a sweet thing to win!

United Kingdom
Because why not?

France
I was reading your articles since the 2013 and it’s really overwhelming to see your business is getting growing by the time goes by, by the way I did learned about raspberry pi B because of one of your posts, and in 2014 about sunxi the community that maintain allwinner SOCs and both, those two shaped my professional career after that so I wanna thank you.

USA. I’ll gladly take these off your hands!

Hello from south of France !!

Now this one is interesting! Hi from the Netherlands

Germany
I am interested in what you can do with the panel.

Thank you from Morocco

France, need this to annoy the dog from distance

That would be welcomed in Portugal.

From the USA…home of the soon-to-be 4th place team in World Cup Group B…
Thanks for the giveaway & the great site!😁

Thanks from Spain Barcelona

This would be fun to have!

I’m in the USA
Interested in seeing what I could do with the control panel.

This would be fun to have!

South Africa. I Install sonoff products at clients houses and businesses. It’s great products and enjoy the excitement of people owning smart homes. I am looking forward to try sonoff’s new products and always looking at ways to improve and add features to smart homes. Keep up the great work!

Start of a smart house. From the USA

I wonder how well it integrates with home assistant.

United Kingdom – love the idea of physical switches in combo with the screen for selecting different connected devices for this. The kids, myself and the parents should all be able to use it!

I’ve got a few Sonoff products and they’ve proved to be reliable.

Looks fun, will go well with all the other Sonoff stuff I’ve acquired over time. Uk

Poland, I really want this in my smarthome!

Hello from the Michigan, USA.

Over here an outsider from Argentina! Thanks for introducing me into Sonoff!

United States
Would be happy to have more Sonoff stuff

I could use this for a solar wood drying kiln in the Netherlands.

Poland. Nice to get that for my collection of smarthome items!

Federico from Italy, I’m looking for a panel to add to my home assistant

Hello from the USA

Hello from the USA

Germany. I have an eye on the NSPanel Pro since its release!

Hello Jean Luc, thanks for all the nice reviews. Australia

Thanks for the entry. USA

Hey, I’m from the UK.
I’ve been looking at the since release , it would be amazing to play around with one

Would fit My smart-home perfect. Japan.

From Italy with love. Endless hoping.

Greeting from the land of the long white cloud – Aotearoa aka New Zealand. Love your work.

Would love to test the panels’ capabilities here in Germany.

Taiwan, Thanks for giveaway

Eagerly following from the UK. Thanks!

USA. I’d love to use these in my home automation projects.

Hello greetings from the Netherlands.

Aloha from Hawaii
Thanks for all the hardware news!

Brasil.
Thanks a lot for the opportunity, Jean-Luc!

Geeking in from the United States.

Hello from Sweden.
This would truly be amazing with my Home Assistant setup.

Seems like an interesting device, I wonder how open it is to other OS installations though.

I am from Israel

I’ll cross my fingers and i hope to be the winner. Come sweet gift to Spain!

Greetings from Portugal, wonderful giveaway, would make good use of it.

Greetings for a wonderful day from Netherlands

UK
I saw this when it got launched. Want to see if it can integrate with existing Z2M on Home Assistant