Electronic components have shrunk a lot over the year, but batteries are usually one of the larger items in a design. ITEN changes that with solid state lithium-ion micro-batteries in the shape of SMD components with up to 100 µAh capacity.

This is clearly not going to power your next smartphone, but ITEM micro-batteries could be found in ultra-low-power sensors potentially replacing non-rechargeable coin cell batteries with much higher capacities (e,g. 100 mAh). 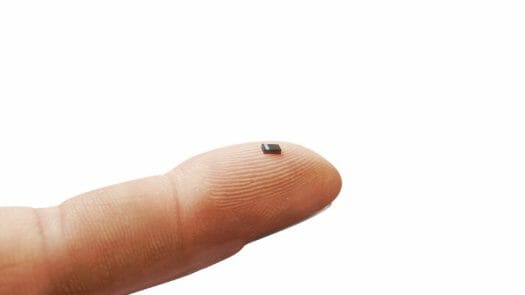 ITEN says their solid-state micro-batteries are superior to coin cell batteries because those are polluting, difficult to assemble on PCB, costly to recycle and require periodic maintenance once a battery is depleted. In addition, some low-power embedded systems still require high current pulses for instance to drive RF transceivers or actuators leading hardware engineers to rely on oversized coin cell batteries as those can only deliver small currents. The carbon footprint of such batteries is claimed to be 200 to 1000 times less compared to coin cells.

With that in mind, ITEN batteries do not need to have as high capacities as they can be recharged with energy harvesting techniques. The company will demonstrate an autonomous asset monitoring solution showcasing its batteries at the ELECTRONICA trade fair and conference for electronics on November 15–18, 2022. The solution will feature a BLE microcontroller, some sensors, an indoor photovoltaic cell from DRACULA Technologies (LAYERR Technology), as well as of course, ITEN’s rechargeable SMD micro-battery of only 100 µAh capacity.  This demo can operate 24/7 while sending data every 10 seconds during the day and every 4 to 5 minutes during the night, and the company claims a 100mAh coin cell battery would be required for the same task.

Solid-state SMD micro-batteries could also be used inside BLE asset tracking, BLE tags, beacons, and sensor data loggers, as well as a backup power supply to keep some clocks or microcontrollers active or to send maintenance alerts in case of failure of the main power source. There’s also one European Directive that recommends getting rid of non-rechargeable batteries in all electronic system designs from the year 2030, so we may start to see this type of battery in more designs from various manufacturers including FDK whose SMD solid-state batteries were features on CNX Software in 2019. 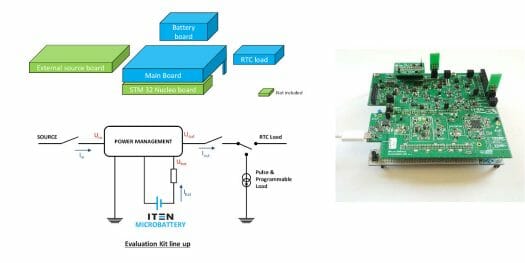 The company is apparently already selling the SMD batteries, modules, and evaluation kits using 30µAh to 500 µAh batteries, and you would need to contact the company directly to order samples. More details may be found on ITEN’s website and the press release.

How big is the indoor photovoltaic cell? Not real useful if the cell 100 sq in.

They are doing a full recharge every 10s during day and 5 minutes at night to run the radio. So you need a huge pv cell, like a sq meter.

This is obviously nonsense. You can’t charge and discharge a lithium cell in 10 seconds, even 30 minutes would be quite some stress.

Discharge of an 100uAh in 5 seconds would be 72mA. Something like an nRF52 draws a few mA (the BLE radio requires at most 16mA at highest power setting), but most of the time it stays in low power mode drawing a few uA. Advertising every few seconds draws 10s of uA on average.

This demo can operate 24/7 while sending data every 10 seconds during the day and every 4 to 5 minutes during the night, and the company claims a 100mAh coin cell battery would be required for the same task. That’s comparing apples and oranges! One is a rechargeable battery, the other one is not, in which case you have to also account for the space- and cost-requirements for the battery-management circuitry and the PV-cell as well for it to be even remotely comparable. There’s also no mention of minimum or maximum safe voltages anywhere for these micro-batteries. I tried to… Read more »

Any difference to the TDK 100uAh smd batteries that are already available on the market ?

For such ultra-low capacities I definitely prefer supercaps!

Supercaps have one pretty nice advantage: you can draw them flat without damaging them. Can’t do that with batteries, which means you need protection circuitry for them.

I’m sure these micro-batteries are useful for some tasks, but for many projects primary cells and/or supercaps would serve just as well or better.

Especially at such ultra-low capacities where the amount of energy storage is not exactly what dominates the package size. Here we’re speaking about less than 1J of stored energy, or roughly 0.33F under 2.5V. That’s approx 6mm diameter by half a centimeter high for a supercap, requiring zero extra component while a battery would need at least some basic charge/discharge regulation (at minima a diode and a resistor for the simplest charging regulation). Thus these are roughly equivalent in terms of PCB size.

After extracting about 0.7J from this 0.3F supercap, its voltage is down to 1.25V already. As you will hardly find any uCs able to operate at this low voltage, you will definitely need a boost converter. If you limit yourself to 1.9V discharge, you will need 1F for the same amount of usable energy.

You will also need a protection circuit, as supercaps don’t like overcharging.