We’ve recently seen solid state batteries are prone to dislodge current Lithium Ion battery technology as they are safer, support higher energy density, and faster charging. Such batteries are expected to be seen in car in the first part of the next decade, in smartphones starting possibly in 2019, but TDK has just announced their own CeraCharge rechargeable solid state SMD battery with mass production scheduled to start in April 2018.

TDK CeraCharge battery-in-a-chip will come in compact EIA 1812 package (4.5 x 3.2 x 1.1 mm), offer a capacity of 100 µAh at a rated voltage of 1.4 V, and can be recharged up to 1000 times. Potential applications include IoT devices, real-time clocks, Bluetooth beacons, and systems for energy harvesting. 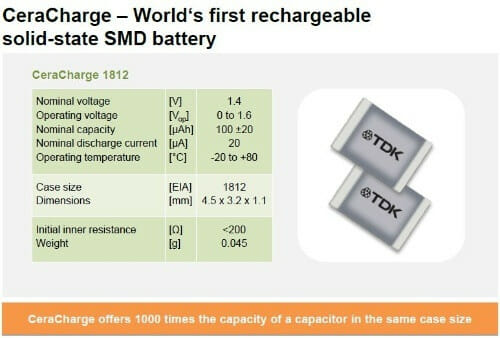 The battery – which will look very similar to an SMD capacitor – does not include liquid electrolyte, and instead uses a solid ceramic element as electrolyte which rules out any risk of fire, explosion, or leakage. The solution works in a wide temperature range from -20 °C to +80 °C making it suitable for outdoor use such as weather stations, and multiple CeraCharge components can be connected in series and parallel to increase capacity and voltage. 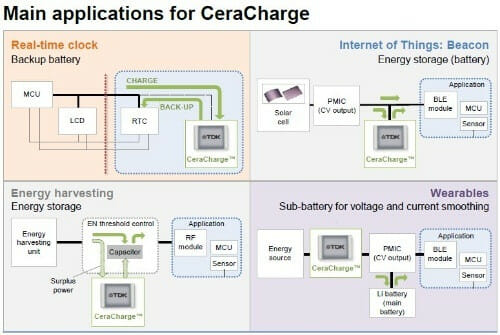 TDK CeraCharge is currently sampling with mass production of the CeraCharge 1812 scheduled for Spring 2018, but the company is also working on even smaller CeraCharge types in other sizes such as EIA 0603 (1.6 mm × 0.8 mm) and with other capacities in order to cover an even wider range of applications. More details can be found in these presentation slides.

CNXsoft said: “We’ve recently seen solid state batteries are prone to dislodge current Lithium Ion battery technology as they are safer, support higher energy density, and faster charging.” Allow me to expand on that… The “current” problem with Solid State Batteries (SSBs) is that they are relatively low power-density compared with conventional batteries. This is because high currents are difficult to obtain across the comparatively high impedance solid state junctions. On the other hand, SSBs are proving to have significantly higher energy-density compared with conventional cells. See here: https://en.wikipedia.org/wiki/Solid-state_battery So early SSBs are proving excellent as tiny high energy-density batteries… Read more »

0.1mAh isn’t a lot of energy, but as the tech improves and they make bigger ones, I can see this being the future.

@paul M
Yes, it seems they are starting with smaller batteries first, and as mentioned above, bigger batteries for smartphones should come in about two years, and a few years after that SSB cars batteries should become a reality.

@paul M
That’s microamp, not milliamp as you wrote, so scale not a lot to tiny and you’re about there…