Allwinner V3LP is a single-core Cortex-A7 processor for dual-camera systems with the exact same specifications as the Allwinner V3S processor introduced in 2016, except it should be more power efficient with a lower DDR operating voltage of 1.5V instead of 1.8V.

Sochip explains that procuring the integrated DDR2 in the Allwinner V3s design is challenging, so Allwinner has replaced the memory in the pin-to-pin compatible Allwinner V3LP with more broadly available and lower power RAM. 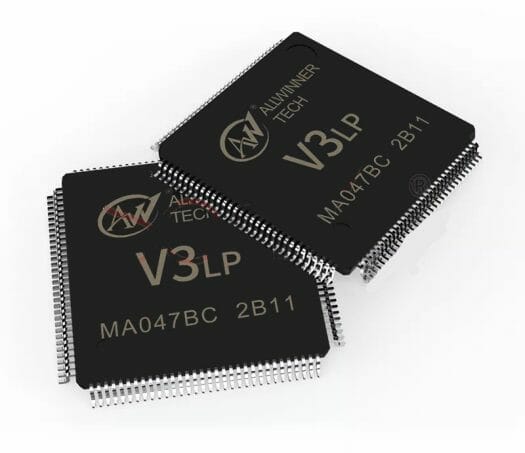 The software will mostly be compatible, except for the RAM, and Sochip tells us to contact them for further details and the software patch, which I was not able to find publicly at the time of writing. They also mentioned that the Allwinner V3S may become EOL in the near future.

There’s very little information about the new Allwinner V3LP on the Internet, but Sochip sells the chip for the same price ($3.85 in low quantities) on Alibaba as the Allwinner V3S.

Thanks to Stuart for the tip.

Allwinner/SoChip already has the S3 which is the same sun8iw8p1 CPU die with a 128MB SIP 16-bit DDR3 die in an FBGA234 package:
https://www.allwinnertech.com/index.php?c=product&a=index&id=78

Such changes make the use cost of S3 more than that of V3s. I hope that there can be an upgrade of DDR3 and the others remain unchanged.S3 brings out more pins, which is very good, but after all, the parameters of V3s are enough for some simple display applications.

Adding an internal microcontroller for embedded projects would be quite useful.

That would require redoing the chip. They’ve just changed the DDR2 die that is bonded to the SoC die in the package.

Anyhoo.. I thought all of the 32bit sunxi chips had an OpenRISC core.

Search for DDR2L and you’ll find it.