I’ve just repurposed an empty XYLITOL gum bottle into a DIY camera mount for the Raspberry Pi Camera Module 3 with privacy mode to boot… In order to avoid confusion, while Xylitol is a chemical compound, it’s also a Japanese brand of chewing gums (Lotte XYLITOL) that is sold in Thailand and other countries. I’m specifically talking about the latter in this post.

Raspberry Pi Trading has just sent me a bunch of Raspberry Pi Camera Modules 3 for review, and since I don’t have any camera mount I initially thought maybe I’ll laser cut some mount or use some LEGOs as I did with the e-CAM20_CURB camera for Raspberry Pi 4. But then I saw some empty XYLITOL gum bottles, noticed the cap would open vertically, and it seemed like the modules might fit in there as well. 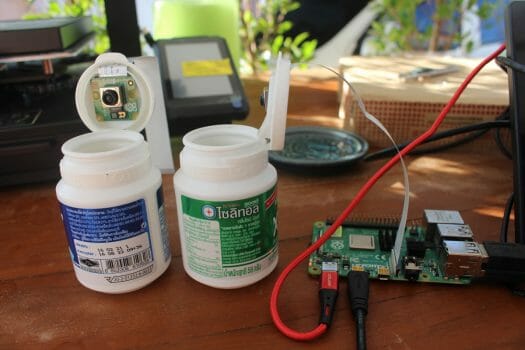 And indeed they do with the Raspberry Pi camera modules snugged neatly into the caps. If I push the bottom of the module into the cap it will be slightly inclined, but it will end up being vertical because the cap itself is very slightly inclined as well. It is also very tight as even if I shake the bottle like a madman the module will not fall off, no glue is needed. 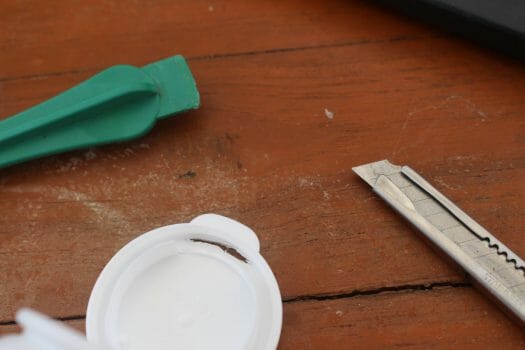 It took me two iterations to come up with the right solution for the DIY Raspberry Pi camera mount. The first time I made a hole for the FFC cable near the bottom of the cap. It did not work because the part of the FFC cable close to the connector is not flexible, so I could not install the module. I finally used my cutter to make space for the FFC cable at the top of the cap. 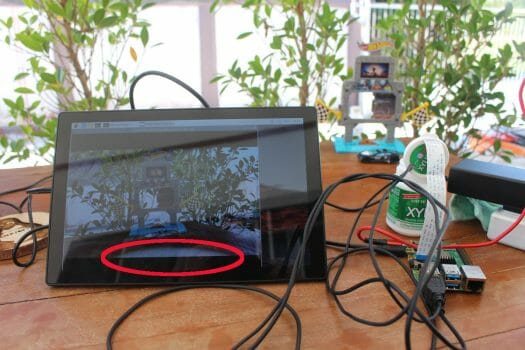 One expected issue is the edge of the bottle shows up in the field of view, and that’s with the standard Raspberry Pi Camera Module 3. But it’s easy enough to adjust the position by a few degrees to remove it. Some rubber pads could be stuck to the bottom of the cap for a repeatable adjustment. 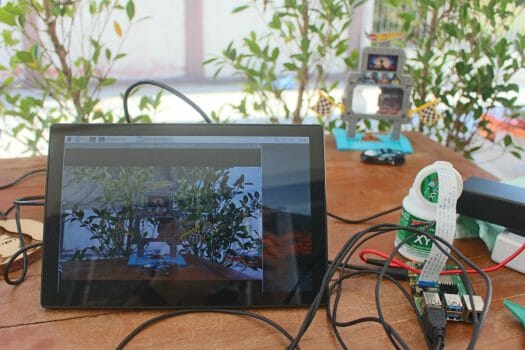 All good.  The bottle can also be closed to enter “privacy mode”! 🙂 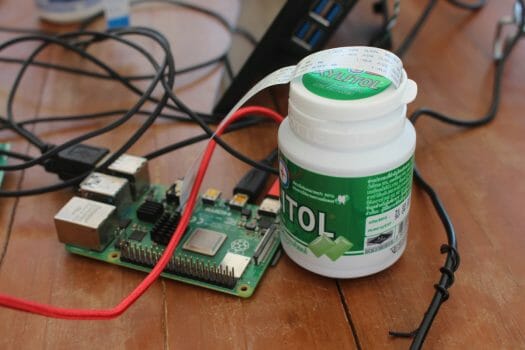 The FFC cable is a little short on that side of the Raspberry Pi, but if you place the XYLITOL camera mount on the Ethernet side it works better, provided you are not using the Ethernet port and/or the USB 3.0 ports… 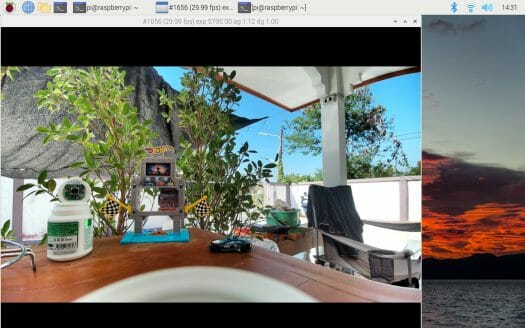 If I switch to the Raspberry Pi Camera Module 3 Wide, the edge of the bottle becomes more of an issue. It can be resolved by further adjusting the inclination of the module, but I could not confirm this since the camera apparently died during testing…only showing “no camera available” or some errors. I tried to adjust the flat cable again, but no luck so far.

Another solution is to turn the module around by 180 degrees and make a hole for the camera in the cap. The privacy mode is gone unless it’s good enough to point at the ceiling or the sky. 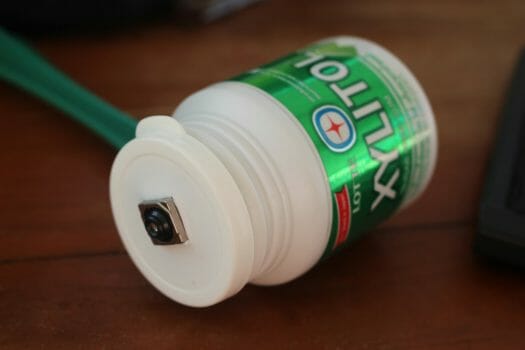 It would also be possible to use the camera mount horizontally with the cap closed. That’s actually the only solution for the bottle above since the cap is broken and detached from the main body.

Another small issue is that the bottle is quite light so it can fall easily even with just some light wind. I first thought about adding some small aquarium stones, but it’s not good while carrying the bottle since the stones may damage the camera module. So instead, I decided to add some cement to the bottle. Now waiting for it to dry… 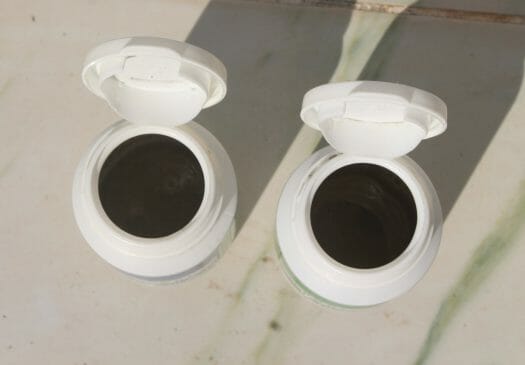 What a very neat idea for repurposing the gum bottle as I’ve seen people use tic tac fresh mint containers to mount the ESP32 cam module yet this looks better,

I imagine some pill or supplement bottles would work as well.

I have some other bottles but they don’t work as well because either the cap is not attached to the bottle, and it is, but it does not stand straight up when opened.

Could a Pi-Zero be used to drive the camera and could it fit inside the bottle along with a lithium battery to give the weight you need to keep the bottle upright?

Yes, the Pi Zero could be used to drive the camera. The bottle is 74mm tall from the inside, the “mouth” diameter is 34 mm (and wider inside), and considering the board measures 66.0 x 30.5 x 5.0mm it should fit with a small battery but it should be tight.

What about heat dissipation?