Raspberry Pi Trading has launched the Camera Module 3, their first camera module supporting autofocus and HDR, designed to work with all Raspberry Pi boards that can take a camera, and offered with either a standard or wide field-of-view, and an optional infrared cut filter.

All four variants of the new camera module are equipped with a Sony IMX708 12MP sensor that supports high-dynamic range (HDR) and features phase detection autofocus. The Camera Module 3 has the same X/Y dimensions and mounting holes as the popular Camera Module 2 launched in 2016, but is several millimeters taller due to the improved optics. 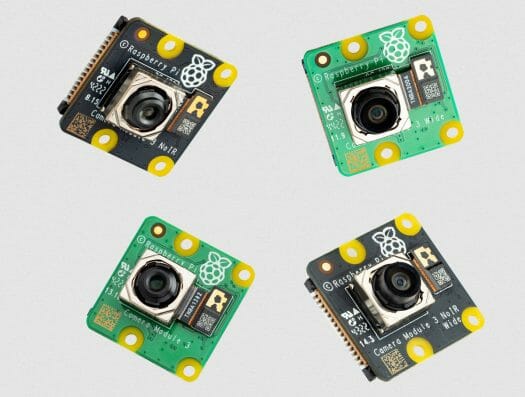 The camera modules ships with a 20cm Ribbon cable for connection with a Raspberry Pi SBC. The Camera Module 3 can be used to take full HD video and up to 12MP photos without HDR, and up to 3MP with HDR. The camera is fully supported by the Picamera2 library including the autofocus feature. Here’s an HDR sample taken with the Camera Module 3 Wide by the Raspberry Pi team in the UK with a mostly dark foreground (wall/road/car) and bright background.

I’m also expecting a few Raspberry Pi Camera Modules 3 for review tomorrow so I’ll be able to test all those new features myself, but we’ll see if I get them in time as those are currently being inspected by the local customs.

The standard Raspberry Pi Camera Module 3 will sell for $25, while the wide-FoV variants will go for $35 due to its more complex and expensive optical stack. Regular readers may remember we’ve previously written about a $25 16MP Raspberry Pi autofocus camera by ArduCam which could potentially be a competitor to the new module, but it lacks HDR support. The official camera may also have a longer lifetime as Raspberry Pi Trading commits to keep the Camera Module 3 in production until at least January 2030. As a side note, the company also launched a new version of the Raspberry Pi HQ camera with an M12 mount that adds to the existing C- and CS-mount options.

More details may be found on the product page, and the new camera modules can be purchased from the usual distributors.

Interestingly I cannot find anything on sony sites about IMX708 sensor, they usually have some news about every CMOS, earlier CCD module with all information about tech behind them. Nothing for keyword IMX708, but it’s not misspelled because there are some news about it for some cellphones.
I wanted to compare this with radxa 4k camera module, it’s capable for 4k vs fhd on those from pi, but there is also something about HDR and that’s interesting too.

My experience is different. I often see products with a Sony sensor where it’s not listed on their website.

I never really understand the terminology. When they say autofocus.. can the focus be controlled directly from software? Or is this some hardware autofocus built in?

I’ve used some full HD webcam before that would periodically “autofocus” at random intervals… Which made it effectively impossible to use for any CV. I don’t think I’ve seen any affordable cameras that can actually focus to a depth through an API

The “2-wire serial control of focus mechanism” suggested manual focus so I checked the libcamera docs over at https://www.raspberrypi.com/documentation/computers/camera_software.html to see what’s what.

From what I gathered, you switch to manual with “–autofocus-mode manual” and then adjust focus lens position with “–lens-position”.

So, since libcamera is foss, you can just look at the sources and see what they’re triggering.

Oh super interesting. Thanks for looking into it. The linked docs seem to have a lot of info

Looks like they have a fork of libcamera. So I’m guessing you can’t really run this easily on any other board

It might be even possible to buy (and receive) a new Raspberry Pi 4 before the end of planned production of the camera in 2030 😉 Just kidding, excuse me for the black humor. The camera is pretty cool. Fingers crossed that Raspberry Pi will really catch with the production in H2 this year as Eben Upton recently predicted.

Why is raspberry pi still stuck with 2 lane MIPI CSI2 on a 15 pin FPC when they have had 4 lane possible from the start? Even the latest model 4 B continues this tradition of providing the same limited 15 pin FPC interface, but the 4 B compute has 2 4 lane 22 pin connectors. Where are the 8 lane 2.5 Gbps per lane chips that support 4K HDR at 60 fps or better? All these products provide limited and ambiguous information about their cameras and what they actually support versus what artificial restrictions their products have. These boards… Read more »

I wouldn’t get all that excited about the “HDR” capabilities as it’s only 10 bit per channel which isn’t very “HDR”. Meaningful HDR doesn’t happen until 12 bits/channel.

RPI Foundation leaves so much on the table with their drive for backwards compatability. At least Camera2 is starting to offer basic support for non-foundation cameras.

It’s still much better than the crap the banana and orange pirate boards offer.

Go away troll. It’s much inferior to what ArudCam offers. Cope.