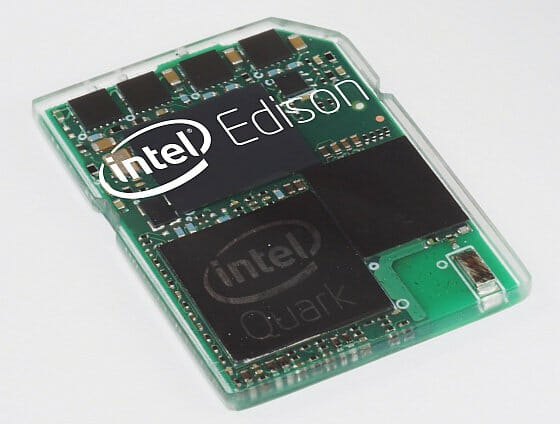 After an earlier Intel presentation about Intel RealSense Technology by Mooly Eden, Intel Senior Vice President and General Manager, the newly appointed Intel CEO, Brian Krzanich, officially opened CES 2014 with the pre-show keynote. This time there was nothing about processors for PCs, and the announcement the most interesting and relevant to this blog was Intel Edison, a tiny SD-card sized board powered by a dual core Quark SoC. Specifications: SoC – Unnamed and new dual core Intel Quark SoC @ 400MHz manufactured with 22nm process technology. MCU – Unnamed Intel MCU (MCS 51??) to manage I/Os and other baseline functions. System Memory – LPDDR2 Storage – NAND Flash Connectivity – Wi-Fi and Blutooth 4.0 LE Dimensions – Just like an SD card The board will support Linux, and common open source tools used by the marker community. It will also support Wolfgram language and Mathematica. There will also be […]

Mooly Eden, Intel Senior Vice President and General Manager, gave a presentation at CES 2014 about Perceptual Computing, introducing Intel RealSense Technology that is currently comprised of a 3D “depth” camera, and Nuance Dragon Assitant voice technology in order to bring “Natural, Intuitive, and Immersive user experiences”. Dragon Assistant is a personal voice assistant that uses natural language understanding for Windows 8 Ultrabooks, notebooks, all-in-ones (AIOs), and tablet devices, and will be available in computers (Ultrabooks, AIO computer, and Tablets) from Acer, Dell, HP, Asus, Toshiba, and Lenovo in 2014. It’s very similar to what’s you’ve got with Siri on iOS or Google voice search, but the quick demo they’ve shown it could understand you without being specific. You awake the assistant by saying “Hey dragon”, and they tried with queries such as “I want to watch an episode of Family Guy” that started Hulu with a list of relevant […]

Qualcomm has just announced their new Vuforia SDK 2.0 for Android and iOS to enable developers to create augmented reality applications for those platforms. Key new features include: Cloud Recognition Service – Up to now developers were limited to about 100 images on the target device due to limited storage space, but thanks to the Cloud recognition service, apps can “see” more than 1 million images, creating new mobile augmented reality (AR) opportunities for retailers and publishers. For example, every product (or image) in a store can bring associated content from the retailer’s website and render it directly on top of the product (or image). Watch American Apparel AR app video demo for an example of such app. The Cloud Recognition service requires a Vuforia Web Services account which is free for developers (Limited to 1,000 images, 3000 events per months), but is subject to fees for businesses. User-Defined Targets […]

Announced in January, Vuforia is the new name of Qualcomm’s Augmented Reality platform. Qualcomm has just announced the commercial release of Vuforia SDK 1.5 for Android and iOS. Applications built using this SDK can now be distributed and promoted on the Android Market and Apple App Store. Developers can also build 3D AR application using Qualcomm’s extension for the Unity 3 cross-platform game engine. The Vuforia SDK 1.5 supports Android devices running on Android 2.2 and above, as well as the iPad 2, iPhone 3GS, iPhone 4 and iPod touch (4th Generation) running iOS 4 and above. Vuforia SDK 1.5 brings the following features and improvements: Ability to swap datasets at runtime: You no longer have to upgrade your app to change the target dataset, and you can now build AR experiences that work on a large number of images. If your app needs to augment more than 60 images, […] 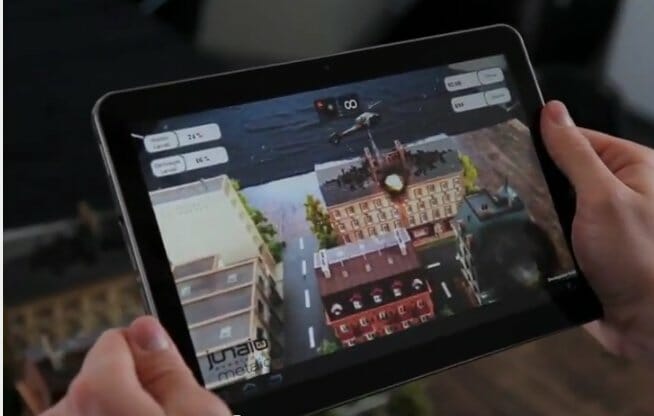 Metaio has unveiled plans to add 3D Object Tracking and Visual Search to its free mobile Augmented Reality SDK for Android and iOS, part of the Augmented City platform. This  SDK is optimized by major ARM chipset providers, and assembles technologies necessary for creating interactive and immersive AR experiences, such as the overlay of virtual information on building facades, city streets and almost any 3D real world object or device, says the company. Metaio Mobile SDK is specifically optimized for Texas Instruments OMAP4460/4470 and ST Ericsson NovaThor processors using respectively PowerVR SGX540, SGX544 and Mali-400 GPUs. The metaio Augmented City platform consists of diverse mobile and web software packages that use computer vision technology to insert 3D and digital information into the real world. Whereas  many existing Augmented Reality (AR) platforms limit experiences to GPS mapping and the anchoring of graphics to simple, 2D surfaces,  metaio platform can deliver real-time […]

Parrot announced a revised version of its Linux-based Parrot AR Drone “quadricopter” flying drone at CES 2012. The drone can now be operated with any Android device such as smartphones and tablets, whereas the previous version could only be controlled by an iPhone or iPad. Another new software features is the auto-pilot. The quadricopter body has been redesigned and reinforced, and fitted with a new 720p HD front-facing navigational camera which can record video and help the pilot navigating the drone. There is also a vertical camera that was present in the first generation. Here are the technical specializations of the Drone’s motherboard: 1 GHz 32-bit ARM Cortex A8 processor (Maybe OMAP3?) 800Mhz video DSP (TMS320DMC64x) 1GB DDR2 RAM USB 2.0 WiFi b/g/n . 3-axis accelerometer 3-axis gyroscope 3-axis magnetometer Pressure sensor for altitude measurement (altitude > 6m) Ultrasound sensor for ground altitude measurement (lower altitude) 60fps vertical QVGA camera […]

Qualcomm named its Augmented Reality Platform “VuForia” at CES 2012. I was a bit confused reading the press release and thought it was a new product. Actually, it is the augmented reality platform whose Beta SDK has been released in December 2011. Qualcomm explains that “Vuforia’s computer vision functionality will recognize a variety of 2D and 3D visual targets. With support for iOS, Android, and Unity 3D, Vuforia will allow you to write a single native app that can reach over 400 models of smartphones and tablets.” To showcase the AR platform, Qualcomm and Sesame Workshop, the producer behind Sesame Street, have joined forces to explore augmented reality experiences for children and created a prototype playset that brings physical toys to life. Jean-Luc Aufranc (CNXSoft)Jean-Luc started CNX Software in 2010 as a part-time endeavor, before quitting his job as a software engineering manager, and starting to write daily news, and […]

Yesterday Qualcomm released QCAR SDK 1.5 Beta, and today Metaio announces its Mobile SDK 3.0 for augmented reality application development on Android and iOS. The metaio Mobile SDK brings with it patented gravity-awareness and visual tracking technology for 2D and 3D objects, now three times more robust than the previous version. These features combined will ensure AR experiences that are more natural, more intuitive, and more realistic, says the company. Metaio recently announced formal collaborations with ARM, ST-Ericsson and Texas Instruments to fully take advantage of the GPU hardware provided by those companies and the Mobile SDK is optimized for ARM Mali GPU (both graphics and compute), ST Ericsson Nova and NovaThor mobile processors and TI OMAP processors. The metaio Mobile SDK also includes its own 3D rendering engine – now with advanced shader support – and a plugin to make use of Unity3D (3D game engine). You can watch […]