You may remember the Turing Pi 2 mini-ITX cluster board that supports up to four Raspberry Pi CM4 modules. It now has some competition with the DeskPi Super6C board, still based on the mini-ITX form factor, and taking up to six Raspberry Pi CM4 modules. The Super6C offers a much slimmer design since the modules are inserted horizontally instead of vertically, plus each module comes with its own M.2 NVMe SSD socket besides a microSD card slot. The board also features two Gigabit Ethernet ports and two HDMI outputs, as well as four USB 2.0 ports. DeskPi Super6C specifications: SoM – 6x sockets for up Raspberry Pi Compute Module 4 Storage 6x M.2 PCIe Gen2 x1 2280 sockets, one per CM4 module 6x MicroSD card slots, one per CM4 module Video Output – 1x HDMI 2.0 output, 1x HDMI 1.4a output, both attached to the first Raspberry Pi CM4 module […] 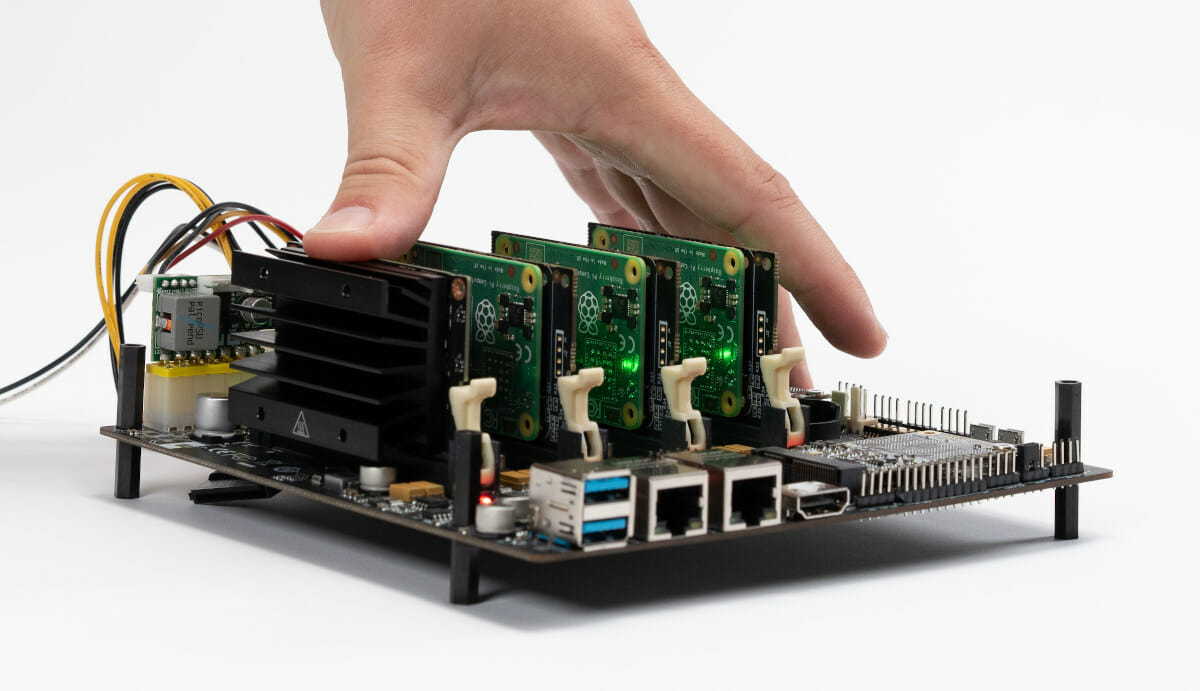 We first covered the Turing Pi V2 mini-ITX cluster board supporting up to four Raspberry Pi CM4 or NVIDIA Jetson SO-DIMM system-on-module in August 2021. The company has now launched the Turing Pi 2 on Kickstarter with a little surprise: the Turing RK1 module with Rockchip RK3588 Cortex-A76/A55 processor and up to 32GB RAM. The board allows you to mix and match modules (e.g. 3x RPi CM4 + 1x Jetson module as on the photo below), and with SATA ports, Gigabit Ethernet networking, USB 3.0 ports, mPCIe socket, you could build a fairly powerful homelab, learn Kubernetes, or self-host your own apps. Turing Pi 2 specifications: SoM interface – 4x 260-pin SO-DIMM slots for up to four Raspberry Pi CM4 with Broadcom quad-core Cortex-A72 processor, up to 8GB RAM, up to 32GB eMMC flash (adapter needed) NVIDIA Jetson Nano/TX2 NX/Xavier NX SO-DIMM system-on-modules with up to 6x Armv8 cores, and […] 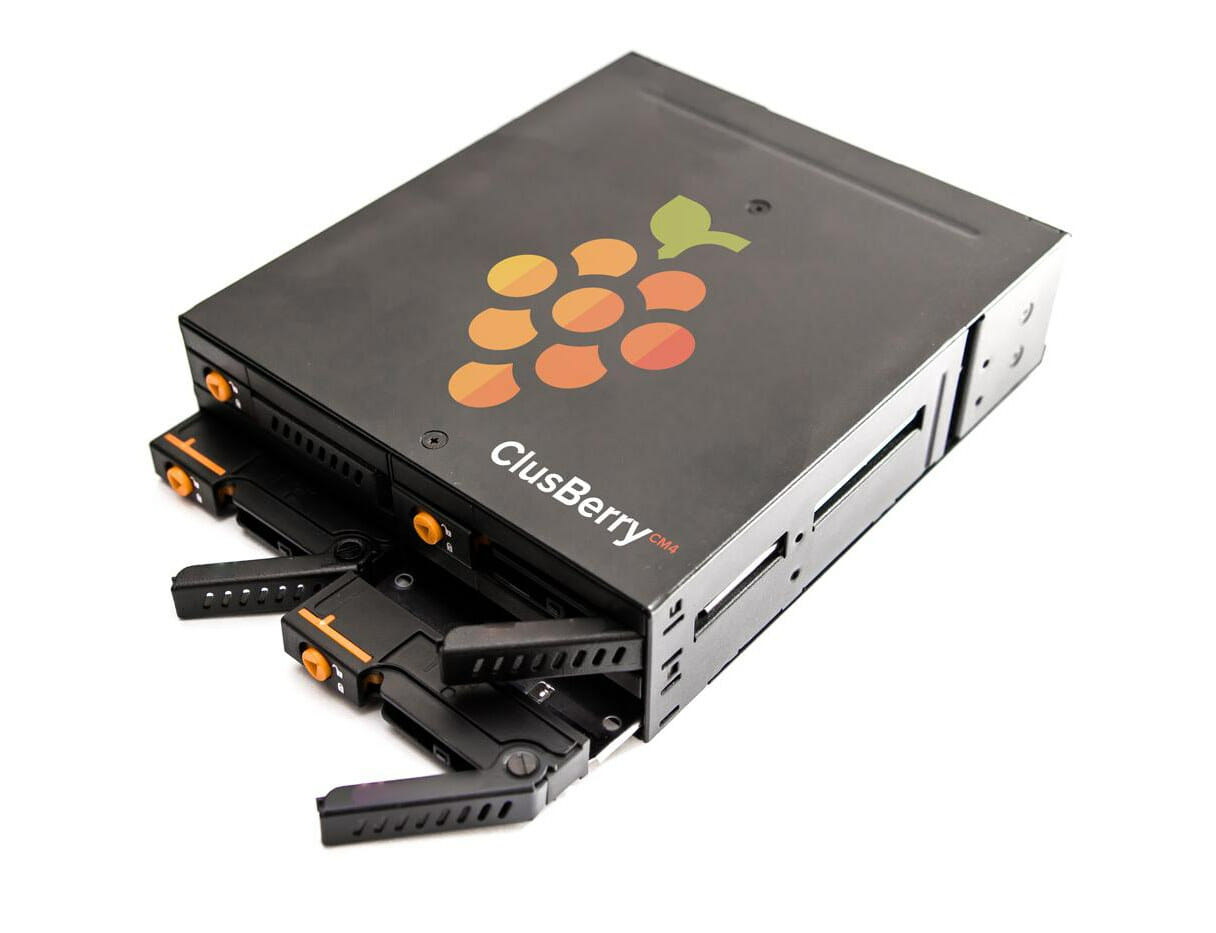 TECHBASE ClusBerry Rack supports up to four Raspberry Pi CM4 based modules which can be added and removed on the fly thanks to a lockable mechanism that reminds me of hot-swappable drives found in NAS. Using the same ClusBerry I/O mainboards as found in the earlier ClusBerry 9500-CM4 and ClusBerry-2M industrial systems, each Raspberry Pi Compute Module 4 inside the ClusBerry Rack offer one Gigabit Ethernet port, one USB host, one micro USB service port, and an RS-232/485 serial port. TECHBASE is not the best company when it comes to describing its products, possibly because those are customizable, and in this case, they don’t show the other side of the enclosure with all ports… But based on the PDF we’ve received, you should be able to create a system with four modules offering the following features each: Optional video output – HDMI Networking – 1x Gigabit Ethernet port (option for […] 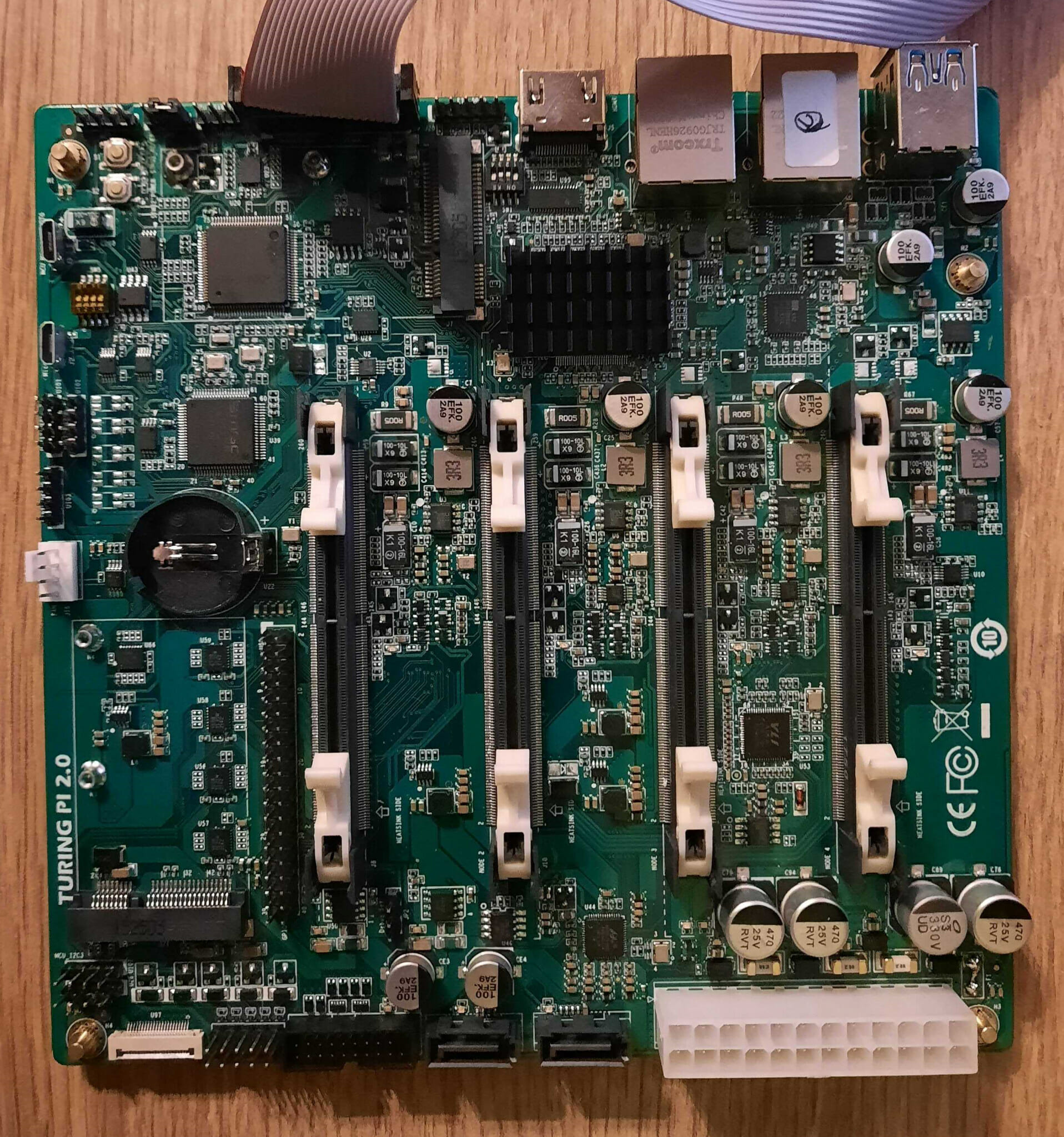 The Turing Pi V2 is a mini-ITX cluster board that builds on the  Turing Pi mini-ITX cluster board taking up to 7 Raspberry Pi Compute Modules introduced in 2019, but instead supports up to four Raspberry Pi CM4 (Compute Modules 4) or NVIDIA Jetson Nano/TX2 NX/Xavier NX SO-DIMM system-on-modules. The Turing Pi 2 board is equipped with two Mini PCIe sockets, two Gigabit Ethernet ports, two SATA III ports, four USB 3.0 ports, a 40-pin GPIO header, and a 24-pin ATX connector for power. Since board-to-board connectors – as found in Raspberry Pi Computer Module 4 – are not ideal for density, the company went with a design including 260-pin SO-DIMM connectors plus CM4 adapter boards, a design that allows them to also integrate other SoMs like the NVIDIA Jetson SO-DIMM modules. Turing Pi V2 specifications: SoM interface – 4x 260-pin SO-DIMM slot for up to four Raspberry Pi CM4 […] 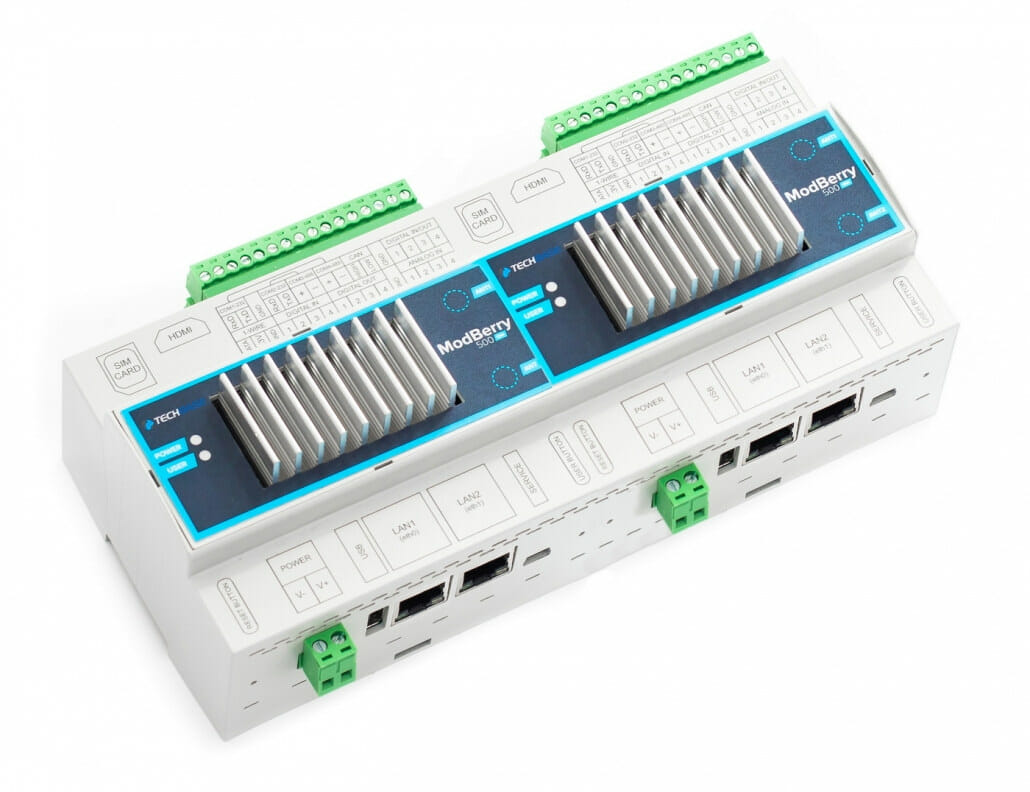 Earlier this year, Techbase introduced the ClusBerry 9500-CM4 cluster system for industrial IoT that can take up to eight Raspberry Pi Compute Modules 4 housed in a DIN rail enclosure. But for smaller projects and IoT prototyping, the company has now designed ClusBerry-2M, a smaller cluster device including two independent ModBerry I/O mainboards and two Compute Module 4’s that’s equivalent to two ModBerry 500-CM4, but with support for software cluster management tools such as Docker and K3s Lightweight Kubernetes. The company did not share the full ClusBerry-2M specifications, but we can derive most of the features from the photos, previous products features, and the announcement: SoM – 2x Raspberry Pi Compute Module 4 with Broadcom BCM2711 quad-core Cortex-A72 processor @ 1.5 GHz, 1 to 8GB RAM, up to 32GB eMMC flash. Storage – 2x M.2 slots for NVMe SSDs Video Output – 2x HDMI 2.0 ports Connectivity 4x Gigabit Ethernet […] 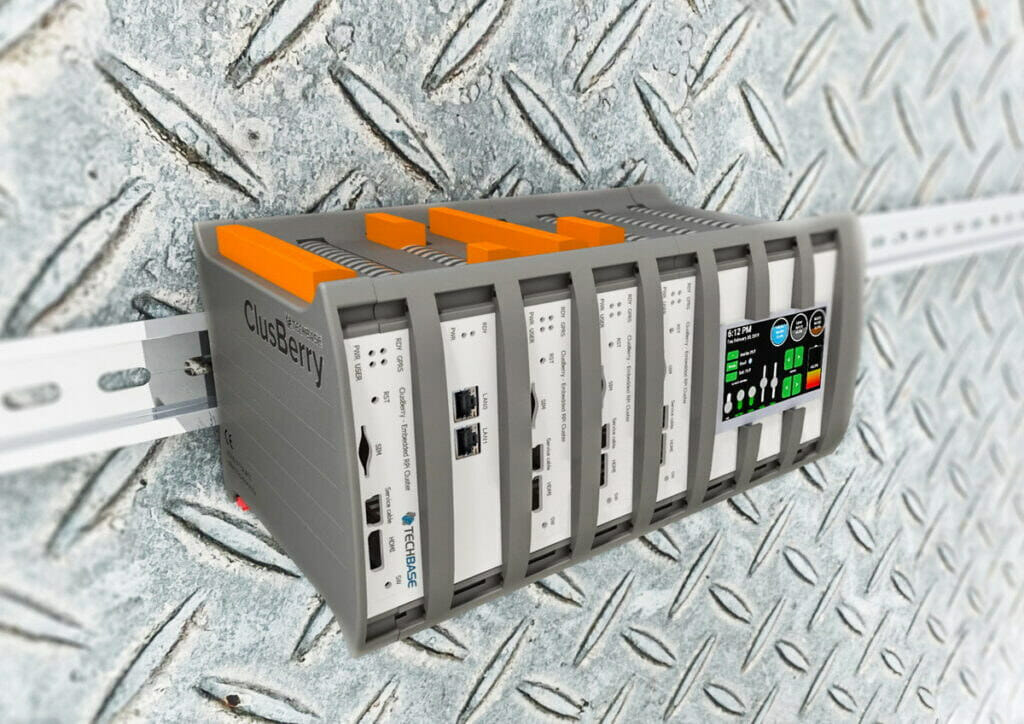 Raspberry Pi cluster boards / solutions pop-up from time to time. But so far, I think we’ve seen only one based on Raspberry Pi CM4 modules with the upcoming Turing Pi 2 mini-ITX cluster board supporting four of those. TECHBASE has now unveiled a different kind of Raspberry Pi CM4 cluster with ClusBerry 9500-CM4 integrating up to eight Raspberry Pi Computer Module 4 in a DIN-Rail housing for industrial applications. ClusBerry 9500-CM4 is designed to be customizable with a choice of Raspberry Pi CM4 based modules and I/O cards: Standard 9500-CM4 cluster module with Compute Module 4 and a selection of configuration that include: I/O Controller with DI, DO, AI, 1-Wire, RS-232/485 and CAN interfaces Communication Gateway with up to 2x Ethernet, serial ports, wireless connectivity: LTE-cat.M1, 4G, 5G, LoRa, ZigBee, Z-Wave, Wireless M-Bus AI Gateway with Coral Edge TPU via PCIe M.2, or up to 4x Coral Edge TPU […] 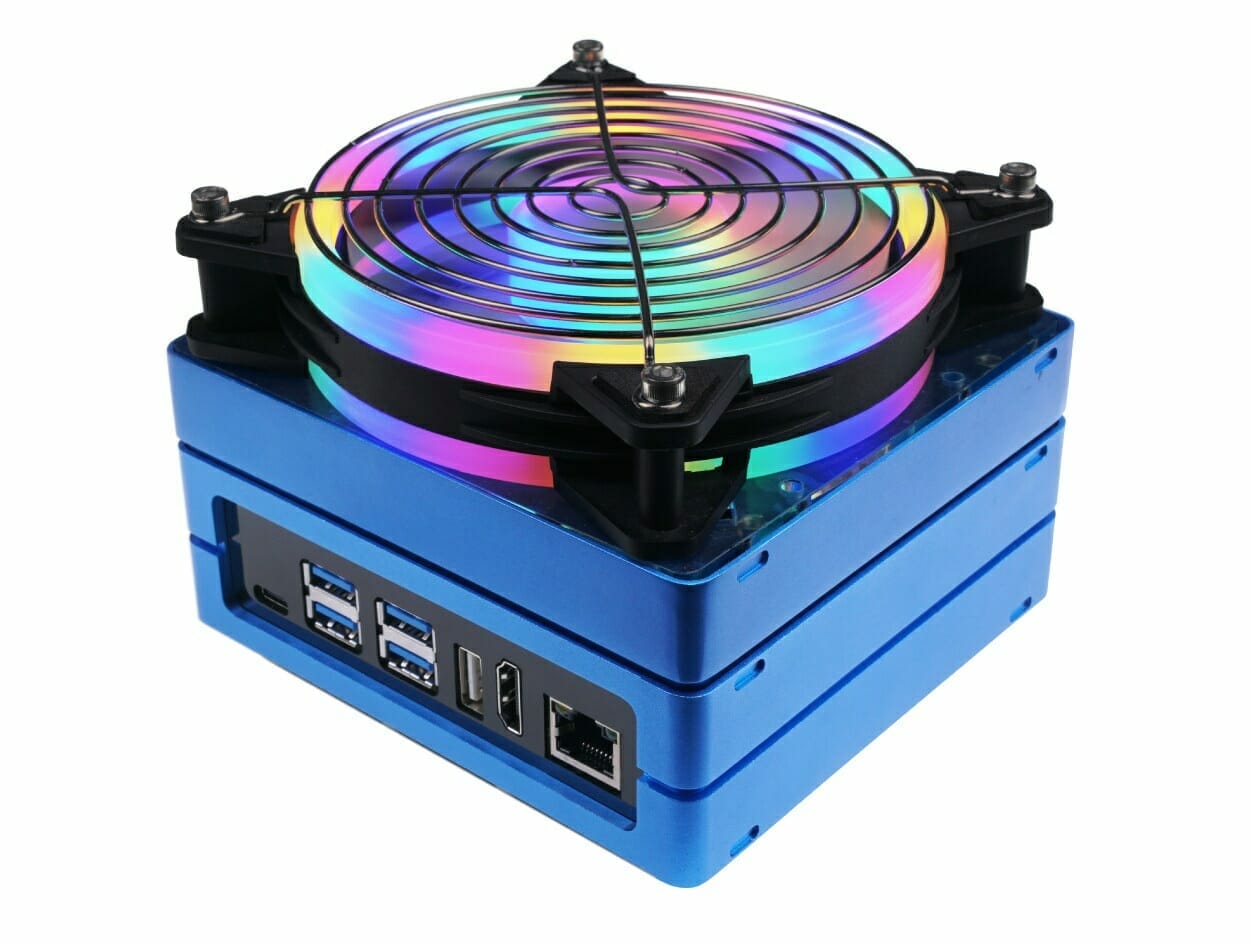