Mid-september, Netgem showcased their new set-top box at IBC 2010: the Netbox N5000 Internet/TV Adaptor. A modified version of this Set-top box will be used by Toshiba (Toshiba places) and be available for purchase for 99 Euros starting in October 2010 in France and later in 2011 in some other Europeans countries.

[ad#Google Adsense – Wide Banner]
First let’s have a look at the casing (Not the one used by Toshiba places). 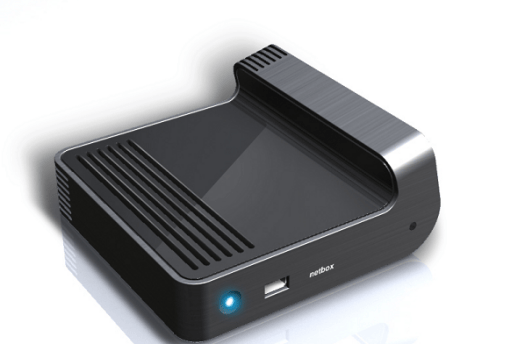 The front panel has the Power LED, a USB port and the remote sensor. They’ll either provide Infrared or RF remotes depending on the end customer requirements.

The back of the set-top box features TV In/Out, Digital Audio (S/PDIF) output, HDMI output, an Ethernet port and the power jack (+12V). Their product brief also mentions a USB port on the rear as an option and Wifi support (802.11n).

On the software side, it runs under Linux provided by Sigma Designs (either Linux 2.6.22 or 2.6.29) with Netgem TV middleware, Netgem Browser and all necessary software to support VOD:  RTSP, Progressive download, Apple HTTP Streaming and Microsoft Smooth Streaming.

You can check-out their Netbox N5000 product brief for further details.

Finally, here’s a video demo of the Netbox N5000 with Toshiba places which connect to VideoFutur VOD solutions  (a spin-off of Netgem)