Here’s the description provided by Telechips:

The TCC890x is a system LSI for digital multimedia applications based on ARM1176JZF-S, an ARM’s proprietary RISC CPU core. It is designed for high-end multimedia entertainment devices such as car AVN, portable multimedia player and home entertainment. The TCC890x supports decoding and encoding various types of video and audio standards with software and dedicated hardware codecs including JPEG / MPEG1 / MPEG2 / MPEG4 / H.264 / VC-1 up to Full HD (1080p) and MP3 / WMA / EAAC+ / AC3, etc. In addition, TCC890x offers a hardwired 3D graphic accelerator to enrich next generation GUI and other graphical applications.

Although, Telechips claims to support WinCE, Embedded Linux and Android, they now fully focus on Android development giving other OSes a lower priority. However, the development board and BSP must be obtained from Telechips and BSP is not (legally) available for download on the internet, so you’ll need to contact Telechips at [email protected]

However, as often, it seems a version of the Linux and WinCE BSP has been leaked on the internet:

where they found a torrent with the following files:

with source, schematics and documentation.

The guys at XDA forum have also started to hack Augen Gentouch 78 a tablet using TCC8902 platform. I’ve already blogged  a video review for this Android tablet. The reviewer did not like the device, but this was not directly related to the performance of Telechips device. 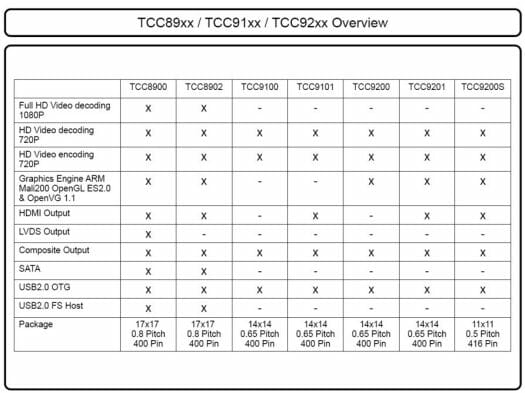 where the only difference is LVDS support which you may or may not need depending on the interface used by your monitor/screen.