A few weeks ago, I wrote a post about Ubuntu Smartphone and Television UI Mockups, and today we know more as Ubuntu has just released more information on Ubuntu TV as well as a Video promo of the system. 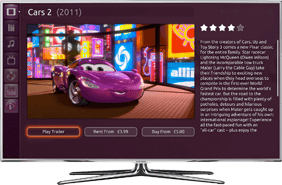 Here are the key features of Ubuntu TV :

Ubuntu TV can run on Intel x86 or ARM Cortex platforms with 1GB SDRAM, 512 MB Video memory and requires 2GB storage. One of the ARM platform is the Pandaboard, although they do not support hardware video decoding yet. Apparently, Ubuntu will not charge OEM who use Ubuntu TV in their TV or STB, which could help with the adoption of the platform.

Finally you can watch the demo video below, it looks quite nice actually.

For further information, you can visit Ubuntu TV page.