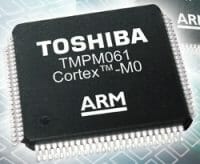 The TMPM061FWFG comes in a 14 x 14mm 100-pin LQFP package and will operate with input voltages from 1.8V to 3.6V, with a maximum operating frequency of 16MHz. There are 4 standby modes (IDLE, SLOW, SLEEP, STOP) in order to ensure minimum power consumption.

Toshiba TMPM061 samples will be available starting in August 2012, and mass production scheduled for December 2012. The MCU will cost 3.50 USD in small quantities. Toshiba has not setup a page for their new (and first) Cortex M0 MCU, but it should show up on Toshiba MCU page in due time.

I hope hackers work over this chip. Down with smart grid.