The Hackberry “development board” is now available for sale on Miniand. This board powered by AllWinner A10 processor comes in 2 versions:

The good thing is that serial interface and FEL connectors will be soldered on the board for easy debugging and recovery. 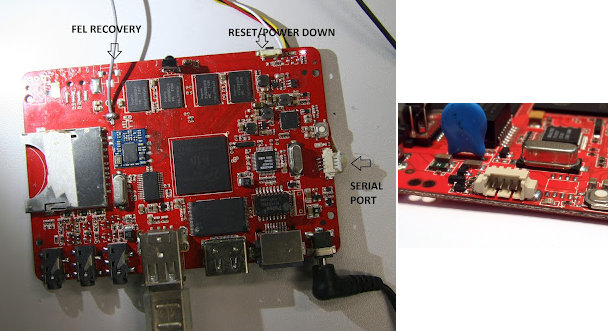 The FEL recovery port allows to reflash the board using Livesuit. As a side note, Henrik, a developer involved in Allwinner A10 software development, has done some work to reverse engineer FEL USB protocol, wrote a small program to enter into Livesuit mode with an SD card (Go to the bottom of the page section “Forcing FEL boot mode without bsp/recovery/usbboot button” for details) and the fel utility, a “script interface for talking to the FEL USB handler built into the CPU”. I haven’t really checked this into details, but the way I understand it, it will eventually be possible to access the serial console via FEL using a USB gadget driver.

As I mentioned in my previous post, I hoped the 1GB version to be sold for $60 or lower, but it’s finally sold for $65, which is still OK, but $18 (DHL) shipping makes the 512 MB version cost $78, so I still prefer the Mele A1000 which is also hackable, has more features, and can be found for around $83 including shipping via China Post. It would become more interesting if Miniand had a low cost shipping option as well, as it would decrease the cost and the likelihood of paying custom duties in some countries. (btw, I’ve just learned there is a ~100% custom duty on imports > $50 in Brazil. This is insane!)

“It would become more interesting if Miniand had a low cost shipping option as well, as it would decrease the cost and the likelihood of paying custom duties in some countries.”
Well said. Shipping on the Gooseberry boards is (was?) about $8 & apart from reducing the chances of being charged duties etc, ordinary postage eliminates the possibility of the handling etc fees DHL charges recipients of its shipments with no warning…

If they really want to charge for shipping, then I think EMS is better option. Its comparatively cheaper then DHL, Fedex etc. and also 9 out of 10 times there is no extra charges like cutom or any WTF type charges.

*posting it again, as looks like my previous post has been eaten up by internet or hanging in-between somewhere.

@max
Yes, I have the same experience with EMS, I’ve never been charged.

The Hackberry board works out at $93 + when you factor in the cost of shipping and VAT which for most, they will have to pay. Handling fees may make the figure increase even further. DHL always seems to charge vat. The gooseberry board is around $67 if you get away with the vat which is likely with regular postage.

@Michael
The total price greatly depends where you are based as well, but that’s right, with DHL the price is likely to be higher. The Gooseberry guy is also supposed to charge VAT in the UK (for people living there), but did not appear to do so when I checked. The custom duties and VAT depends on the price actually written on the package, so it’s difficult to know how much you’ll pay until you actually try a company.