After teasing us last March, Archos officially launched their new Gen10 XS tablet line, and specifically announced the Archos 101 XS, a 10.1-inch Android 4.0.3 tablet powered by Texas Instruments OMAP4470 (Dual core Cortex A9) @ 1.5 GHz that features a detachable magnetic keyboard called the CoverBoard which also serves as a protective cover when not in use. 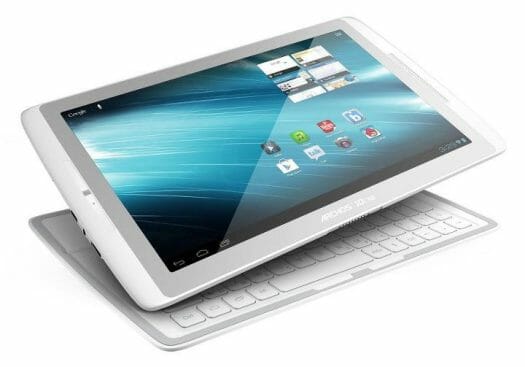 Here are the specs for this new tablet:

All Archos Gen10 XS tablets are Google certified (with official Google Play), currently feature Android 4.0, and will be upgradable to Android 4.1 Jelly Bean in Q4 2012.

Archos 101 XS can be used without the keyboard just as a normal tablet, or with the keyboard to turn it into an Android netbook (and I’m pretty sure Ubuntu will run on that thing), and the keyboard can be used to as a cover when the device is not in use. Watch the video below to see how the keyboard and tablet fit together.

Archos has sent some evaluation samples to several blogs, and reviews are available on sites such as Anandtech, Ubergizmo and Engadget. Further information is available on Archos 101 XS page.

AFAIK, this is the first tablet where the keyboard is fully part of the design (and not simply an accessory).

Well… if you ignore about a dozen devices like Asus EeePad Slider.

@Dr. Azrael Tod
OK… I was not thinking right when I wrote that. I corrected it.

do all these companies go bye bye if microsoft releases surface RT for $200?

I think maybe for the SOC/Display, Archos are $50 too expensive, it will be interesting to see how much the 80 goes for. If they can do it for the same as the 80 G9 was last year they could have a winner.

Archos had command on entire Europe market once in tablet segment, but now they are slowly losing those market to biggies, this model is very late and fell into almost 2nd tier category. They can’t advertise this as a flagship model and they shouldn’t. Especially when similar chips are being used in Chinese tablets, which are selling on 30-40% lower then this price along with JB and 2GB DDR3, IPS display, bigger batteries etc. These specifications taken from their website. Ram: 1GB (No mention of DDR2 or DDR3 frequency etc.) Display: 10.1’’: 1280 x 800 MVA which is middle of… Read more »

@max In 2010 and 2011, times were good for Archos, because they were almost the only one on their market segment (mid-range tablets with low price), but now there’s just too much competition and it will be difficult to survive without innovating, with possibly something else than tablets. I don’t think they should try to compete at the top end, as bigger companies marketing machine would crush them, and their business strategy is to offer tablets below $400. I really like 101 XS Tablet concept with the magnetic keyboard, and OMAP4470 performance is really good (several benchmarks show it’s as… Read more »

I agree on every point you said, But the moment you’ll read that it’ll be available in November, everything sounds too dated. I made my point considering that date of release. I’ve seen the review. And i agree that they should diversify their portfolio, But again my question is, why they haven’t done it yet? They made ok money till 2011. They should have started making mid range unlocked phone and 3G tablets. The entire Europe and Russian’s sales now a days is going to China. The small Chinese players like oppo,zoppo, jiyayu, newman are coming up with extreme hardware… Read more »